POMPANO BEACH ELECTIONS:  The City Commission voted to place three questions on the ballot of the March 17, 2020 Presidential Primary election, giving Pompano Beach voters the opportunity to decide if they want the two-year terms that city commissioners serve to be increased to four-year terms, if the terms of city commissioners should be staggered, and if municipal elections should be held in March, rather than in November.

The three issues, approved by the  Commission at its July 23 meeting,  must be decided by voters in a referendum because they involve amending the City charter. Each of the proposed amendments can stand alone, and must be approved by a majority of the voters.

Staggering the terms of city commissioners is the provision the Commission considers most important in changing the Pompano Beach elections process.

It is needed to avoid a situation where all commission seats are up for grabs at the same time, which has happened in recent elections. The staggering will maintain “continuity of leadership at the commission level,” said Mayor Rex Hardin.

In order to stagger election years for commissioners, commissioners from odd-numbered districts who are elected at the next scheduled municipal election would have an initial term of three years, and then all commissioners elected in future elections would have terms of equal length, either of two years or four years, depending on what voters decide. The term length of the Mayor-at-Large seat would remain four years.

Some commissioners and residents voiced concern that a significant number of voters would be “disenfranchised” if the three questions were placed on the ballot of the March 17, 2020 Presidential Primary election and not the November 2020 presidential election.

It was noted that in the Presidential Primary, Independent voters cannot vote for the Democrat or Republican candidates, and Republicans might not turn out because their president will likely be their nominee. However, Democrats will have numerous candidates on the ballot.

Hardin said he supported having the referendum in March 2020, rather than during the presidential election in November, because the ballot questions are important and should be put forth as soon as possible, and it was not intended to limit in any way the number of voters.

“The public has the absolute voice here,” he said. “Whether they consider it important or not to come out and vote, that’s up to them.”

In 2008, Pompano Beach elections for city offices were moved from March to November. Hardin explained that he was part of the genesis to bring about that change.

“I felt that was a better option to get more people out there,” said Hardin.

While having municipal elections in November did draw more voters, “it is much more difficult for anyone who wants to run for public office to run against an incumbent in a November election,” said Hardin, because there is a tendency to vote for the familiar.

It is also a larger burden for a challenger to come forward, because it is much more expensive to run in November.

“But I’m more focused on the challenger aspect in March, so that’s why I support that,” said Hardin.

On July 9, the Commission voted unanimously on first reading to hold the referendum on the charter amendments. At the second reading on July 23, Commissioner Beverly Perkins said she was casting a ‘no’ vote because she is “strongly for term limits, and that’s not listed on the ballot.” Perkins said the Commission should also reconsider having local Pompano Beach elections in November to get a higher voter turnout.

The cost to the City to hold the special municipal election on March 17, 2020 will be $55,000. The City Clerk said that if the City held a stand-alone special election, it would result in tripling the expense, because there would be no shared costs with the County’s scheduled elections.

The Commission was in agreement that an education campaign should be conducted to make sure voters are aware that Pompano Beach will have three charter amendments on the ballot.

For both the March and November Pompano Beach elections in 2020, voters will be able to use what the Supervisor of Elections refers to as a Mail ballot, which takes the place of the Absentee ballot.

PICTURES: Pompano Beach Fishing Village- Some Delays; Some Speeding Ahead 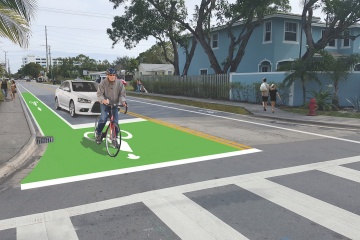