In the first quarter of 2018, Habitat for Humanity of Broward plans to start vertical build on a new 77-home, 9-acre community in Pompano Beach. The community, projected to cost $16 million, will be the largest Habitat for Humanity construction project ever undertaken in the county. The project hopes to put a small dent in the huge demand for affordable housing.

It’s part of the American Dream — to own a home and provide your family with firm, stable roots in a strong community. This is the longtime dream of Shad Jordan. He and his wife Javasia both grew up in Ft. Lauderdale and have known each other since middle school. Now they have been married eight years and have four, markedly well-behaved children: The oldest, Sanaiyah, 13, is a dancer and flag girl; the two boys, Shad Jr., 10, and Sacari, 7, are both natural athletes; and the youngest, Savannah, is a talkative two-year-old.

Shad Johnson works full time as a Coordinator Service Vehicle Operator for AAA and coaches youth football, while Javasia is a full-time mom. The family of six has been renting a cramped two bedroom apartment in Lauderdale Lakes with no outdoor space for the kids. This October, with the help of Habitat for Humanity of Broward, the Jordans will get to break ground on their new, four-bedroom home in Washington Park.

“I’m just a dad trying to take his family to the next level — support the kids and get them on the right track,” said Shad Jordan. “That’s the biggest reason I do what I do in life — to see my kids grow up in a home.”

The Jordans were just one of 15 families chosen out of over 5,000 applications in Habitat Broward’s most recent application cycle for affordable homes. The high number of applications for so few slots is a microcosm of a widespread crisis plaguing Broward County and South Florida.

According to a mid-2017 study by the Joint Center for Housing Studies at Harvard University, South Florida ranks as the worst area in the entire nation for the gap between wages and cost of housing. Broward County ranks dead last out of all 67 counties in Florida. In Broward County, two out of three renters are considered to be “cost-burdened,” meaning they spend more than 30 percent of their income on housing; and almost a third of all renters are “severely cost-burdened,” spending more than 50 percent of their wages on rent. The average monthly rent in Broward County is $1,800, which is unaffordable for 78 percent of renters.

Nancy Robin, CEO and Executive Director of Habitat for Humanity of Broward, called the affordable housing crisis a “South Florida epidemic.”
“It’s everywhere,” she said. “Every city is struggling with it, but I think the uniqueness for us [in Broward] is that we are a hospitality and service-based workforce and our wages absolutely do not support the cost of housing in our community. It’s a problem. The need, I think, is as dire, truly dire, as I’ve ever seen it.”

To help families like the Jordans, Habitat for Humanity of Broward is taking on its largest project in history — “A Rick Case Habitat Community” — a new 77-home development on 9 acres of land in Pompano Beach, between Blanche Ely High School and Hopewell Baptist Church. The community will include a park, 42 one-story homes and 35 two-story homes. The projected $16 million project will be completed in phases over five years — the first being below-ground infrastructure.

For the infrastructure, the project received two matching $500,000 donations from Ed Ansin, owner of Sunbeam Television Corp., and Rick and Rita Case, owners of Rick Case Automotive Group, plus a $200,000 donation from the Hudson Family Foundation. Habitat has raised $1.5 million toward the infrastructure, but will need to raise an additional $1.5 million before moving forward.

“Finding a sponsor for the actual house is easier. Infrastructure and dirt isn’t quite as sexy,” said Robin.

Robin hopes Habitat can complete the infrastructure phase, which will take about four months, in time to begin vertical construction sometime in the first quarter of 2018. After the infrastructure is complete, the first building phase will include 12 homes; the second 12 more, plus the community park (sponsored by JM Family Enterprises). Each home build is typically sponsored by one generous individual or organization.

A Rick Case Habitat Community gained some national attention at a groundbreaking ceremony for the project at the Hopewell Baptist Church in March of 2017, at which former presidential candidate and Secretary of Housing and Urban Development (HUD) Ben Carson spoke. Carson applauded the project, saying it was a great example of public and private partnership.

“We have three to four times as many people in need of affordable housing as we are able to provide,” Carson said. “We need to start thinking of the right kinds of ways to do things…This project right here is one of the things that works.”

Also in attendance at the groundbreaking was Superintendent of Broward County Schools Robert Runcie, who pointed out that, statistically, a stable home environment has a direct correlation with a child’s success.

“No matter how you slice the data — you look at gender, geographic location, race, ethnicity — the biggest determinant of students’ success is poverty,” Runcie said. “Creating a situation where our students are able to go to stable home environments is going to be enormously impactful in terms of the success of the students, their families and the entire community.”

With such a high demand for affordable homes, Robin said selecting who will get a house in the new Rick Case Habitat Community will not be easy. The Habitat application process is intense.

“There’s a misunderstanding out there that Habitat gives homes away or that it’s a lottery system,” said Robin. “It’s not a giveaway. The families are taking a mortgage. They have good jobs, they’re putting down a down payment, they’re putting in sweat equity and they are truly, truly, working so hard toward the dream of home ownership.”

To demonstrate the intensity of the application process, Robin cites Habitat Broward’s most recent application cycle of which the Jordans were a part. For that cycle, Habitat Broward received over 5,000 applications for only 15 open slots. From those, Habitat narrowed the batch to 1,247 based on the income requirements for a 30-year, zero interest mortgage on the homes, which were appraised around $175,000. While the house payment itself for those homes only calculates to around $400 a month, Broward County has extremely high property taxes and insurance.

“Those are half, if not over half, of their housing payment,” said Robin. “The total came to about $950 a month.”

Habitat serves families who make 80 percent of the Area Median Income (AMI) and below, so the applicants needed to have a family income of around $38,000. After the number of applicants was narrowed to 1,247, they were invited to a series of informational sessions in which Habitat explains the process.

The participants are required to put in 300 sweat equity hours (including building the home, working in the Habitat for Humanity ReStore or in the office, and attending workshops). Families work on both their own home and their neighbors’ to encourage community building. Both parents and children attend workshops. There is also a $2,000 down-payment requirement, which can be paid over the year the family is waiting to be placed.

After the most recent applicants learned about the requirements, Habitat was left with 630 applications. By looking at credit, job history and verifying incomes, Habitat whittled them down to 130. Using other, less objective factors, the pool was narrowed to 25. Then Habitat performed home visits. Robin said Habitat looks for families who resonate with Habitat’s values and are determined to provide their children with a stable home environment and a good education.

“They truly must want the American Dream,” she said.

Robin predicts that the application process for A Rick Case Habitat Community will be just as, if not more, competitive than the last cycle. The Jordans said the journey is absolutely worth it.

“We’ve enjoyed the process and the people of Habitat. They are great people to be around. We consider them our Habitat family,” said Shad Jordan. “We go to class together, we work together, so we are building a bond amongst each other. That’s what Habitat is about — building a strong family.”

“For us, it’s more than building houses,” said Robin. “It’s about building community.” 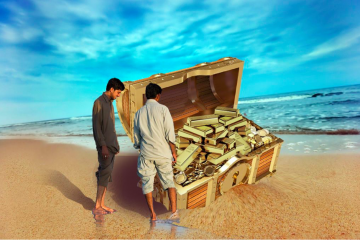