POMPANO BEACH REDEVELOPMENT – Plans to move the historic McNab House from its current location at 1736 E. Atlantic Boulevard in Pompano Beach to McNab Park, just five blocks east, took another step forward at last Thursday night’s meeting of the Zoning Board of Appeals. The board voted unanimously to grant a temporary use permit needed to relocate the house to the park and avoid demolition.  Opponents to the plan were also present at the meeting and disclosed a petition to “Save McNab Park”.

The Pompano Beach Community Redevelopment Agency (CRA), which requested the permit, has plans to convert the house into a restaurant with a botanical garden. The permit, which is valid for one year, was approved on the condition that a site plan application be filed within six months, and all necessary permits and approvals, including zoning inspections, be obtained. If site plan approval is delayed, the CRA would have to come back before the Zoning Board of Appeals to extend the time period of the permit.

The house and garage are expected to be moved to McNab Park in October, according to consultant project manager Jenae Valentine, of Redevelopment Management Associates (RMA). The structures will front Atlantic Boulevard and must be set back 25 feet from the front and side lot lines.

The house would be placed to the east of the Chamber of Commerce building that currently occupies the northwest corner of the site. The Chamber of Commerce has plans to move, once they have found a new location, and the building would be torn down to make way for the botanical garden. The garage would be placed east of house, in the area now occupied by the north shuffle board courts.

The open area between the house and the garage may be used for outdoor dining and more of the botanical garden. The CRA is trying to preserve the existing civic building, which could be used as the commercial kitchen or storage space for the restaurant. The two-story garage may be used as part of the dining area, with office space upstairs.

Proposals from movers are currently being reviewed and a selection is expected to be made in July. The house will be placed on blocks once it gets to the park, and after the site plan has been finalized, the foundation will be built underneath the house, and the house will be lowered onto it, said CRA Director Nguyen Tran.

The CRA has also been working to procure an architect, a landscape architect and an engineer to design the site plan. The architect must have experience in renovating historic structures and converting them into restaurants, said Tran.

The current conceptual design is only for the northern half of the 2.5-acre park, which is in the East CRA district. For now, the rest of the park will not be touched, said Tran. An earlier conceptual plan proposed two small bed and breakfast style hotel buildings with 10 units each, which would be operated by a private entity.   Kim Briesemeister, principal of RMA, the consultant to the CRA, recently confirmed to Pompano! Magazine the restaurant “would still be viable without the bed and breakfasts” but believed they would add to the uniqueness of the project and would be used for, among other purposes, as a place for guests to stay after attending a special function at the restaurant facility.

Residents both in favor of and against moving the house to the park voiced their opinions at the Zoning Board of Appeals meeting.

Those against the relocation expressed concern over a number of issues, including losing the basketball court, tennis court, shuffleboard courts and civic building that are currently in McNab Park, as well as the need for additional parking.

One woman presented the Board with a copy of a petition that had been started two days earlier. She said it had been signed by 122 residents who support “saving McNab Park,” and she hoped to have more than 1,000 signatures by next week.

“I’m just asking you to take this decision very seriously,” she said.

Another resident said she was in favor of saving the house, but not at McNab Park, because it’s the only park east of Federal Highway in Pompano Beach that is wholly owned by the City and has sports facilities.

Pat Rowley Bedells of the Pompano Beach Historical Society told the Board that the McNab House is a unique house, and to let it “be destroyed and lose one more piece of Pompano history is a sacrilege.”

Bedells added that she understands there are going to be “more fights” about what goes in the park, “but we have to move the house and save it to have that fight. Once the house is gone, there is no going back.”

“This house can be repurposed into a restaurant, and it can work,” said Bedells. “The park does not have to be destroyed; the park can be used and enhanced by the house.”

Chairman of the Board Dan Yaffe explained to audience members that the board’s sole focus was to discuss whether the applicant met the requirements to be granted a temporary use permit.

“We are only giving them permission to move the house,” he said. “The final decisions as to the site plan approvals, and everything else, are not in our hands.”

The Pompano Beach Parks and Recreation Advisory Board, at its meeting on June 19, recommended to move forward with the relocation of the McNab House to the designated spot in the northern portion of the park, but that no further action be taken with respect to the redevelopment of the entire park until the advisory board can see actual conceptual plans.

The Parks and Recreation Advisory Board also made a recommendation to the City Commission saying it strongly opposed any type of bed and breakfast or hotel on the park property.

Before the Zoning Board of Appeals voted on the temporary use permit, Chairman Yaffe said it was an opportunity “to preserve a significant historical building” and save “some of the history of the city.”

Glenda Clark, the granddaughter of Robert A. McNab, the Pompano Beach pioneer who built the house, was in the audience with her sister Cindy Peters and Phyllis Chapman, another family member.

“We’re so thankful that it’s come this far,” said Clark when referring to the McNab House move.

SEVERAL GREAT CONCERTS ARE COMING TO POMPANO BEACH THIS MONTH 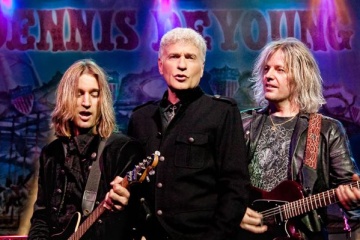