Plans for a mixed-use development on property adjacent to Aquamarina Hidden Harbour took another step forward last December when the City Commission unanimously approved a land use change that entitles the developer to build up to 50 residential units per acre on the 8.9-acre site. A number of residents who oppose the project have concerns about increased traffic and overcrowding.

The site of the proposed project — located on the east side of Federal Highway, north of NE 14th Street Causeway, and south of NE 17th Street — is under the same ownership as Aquamarina Hidden Harbour, which currently includes a boatyard and dry boat storage building.

The land use designation of the property was changed from “Commercial, Medium-High and Low-Medium Residential” to “Mixed-Use Residential High.” It is the first time this designation has been placed on any map in the county, according to Jean Dolan of the city’s Development Services Department. Under the property’s old designation, a total of 88 residential units were allowed.

Last May, the developer signed a restrictive covenant that limits the project to no more than 323 residential units (roughly 36 units per acre), and an overall cap of 650,000 building square footage for residential, commercial and marina-related use. The residential units will likely be one- and two-bedroom rental units, according to Graham Penn, a Miami-based land use and zoning attorney who represents the developer.

The proposed development includes a restaurant with a view down the waterway, a parking garage and marine retail space. The dry boat storage building will remain, but the wet slips will not. Under the restrictive covenant, the developer is offering to dedicate a small lot north of 16th Street for use as a public park, and to provide a water taxi stop at the development site. Pedestrian paths are planned along the waterway on NE 23rd Avenue and NE 16th Street.

“The idea is to finally bring the public to this waterway again in a superior fashion,” said Penn. “It is a wasted resource to have this water access really used only for industrial uses.”

Residents have expressed concern about the height of the eight-story residential structure that is proposed for NE 16th Street, where the boatyard is currently located.

Under the developer’s covenant, residential development can be no higher than 35 feet (three stories) within 50 feet of an existing adjacent residential neighbor, Penn explained.

Before the Commission discussed and voted on the land use plan amendment, members of the public voiced their opinions of the project, which took about an hour and twenty minutes. Eight people spoke in support of the project; 22 people spoke against it. The City had also received numerous letters from residents either in favor of or opposed to the project.

A key concern of residents in the surrounding neighborhood was that NE 23rd Avenue, which is used to access 14th Street Causeway and Federal Highway, would be closed off by the development, but under the current plan, it will not be abandoned.

Resident Joe McGee said that, with the number of rental apartments that are planned, NE 23rd Avenue will not “be as viable as it is today.”

“That’s going to be a tremendous impediment to traffic in that area, not to mention the additional traffic going out onto Federal Highway itself,” said McGee.

Resident Carole Fielder, a boat captain who frequently uses the boatyard, told commissioners that by cramming 323 rentals “right up against what is a pleasant, if not luxurious, waterfront set of residential properties, you’re going to alter the lifestyle and the value of all those current properties.”

“Pompano is not a sleepy little town left behind anymore,” said Fielder. “We are a desirable place to live to avoid the horrible crush of crowding in Fort Lauderdale and certain other overdeveloped cities in South Florida. We in Pompano are here for the suburban nature of our city. We don’t want it to be an urban center.”

Resident Melody Marterano said the conceptual renderings of the project are “fantasy” and don’t reflect what can actually be done on the site.

“What they’re proposing is beautiful, I love development, but not there,” she said. “Just think logically of what we’re doing. Are we doing it for the money, so they can sell the property, or are we doing it because it’s going to benefit us and our neighborhood?”

“I fully support this project,” said resident Rhonda Bunker. “Any community that’s going to grow is going to have a light increase in traffic, but we can make a decision: we can stay where we are or move backwards, or we can be progressive.”

Bunker said the developer should be given the chance to “help us become profitable as a community and be a better Pompano.”

Brian LaRue, a resident and business owner, said he understands “there’s some nervousness to growth in the city of Pompano Beach,” but that more young residents are needed and one- and two-bedroom units “might be great.”

“We have to go with the changing times,” said LaRue. “It’s an excellent project…Do set some guidelines to make sure we hold the developers accountable.”

Resident Jeanie Schermesser said “there are people who believe that progress means this type of development, and that’s not necessarily progress.”

“I ask the commissioners to think about having an attitude adjustment on development, especially in sensitive areas like we have here.”

Ronald Thurston, who lives outside District 1, where the project site is located, said: “I support this 100 percent, so much that I went out and got over 300 petitions signed supporting this…I want to get one of those places to rent, I want to look out on my balcony and see the ocean view, I want to see the sun come up. I work hard, I deserve that.”

“I hope everyone on the dais has an open ear to the entire Pompano Beach and not just a certain district,” he said.

Molly Moor, who posted a petition online opposing the project, said she is not against development, but the developer hasn’t genuinely attempted to work with the neighborhood to come up with a reasonable and responsible solution.

Following public comments, there was a ten-minute discussion by the Commission, and then the vote was taken.

Mayor Rex Hardin said he realized “there’s a lot of angst” related to the redevelopment of the property, which is “a challenging site,” but that “it’s really the beginning stage of this project.”

Now that the land use change has been approved, the developer needs to go through the process of rezoning the property, and getting site plan and architectural approvals.

“We will have to keep working with the community going forward on the actual design, the density, the height, all those elements that come through zoning,” said Penn.

Penn said traffic issues will also need to be resolved, and detailed studies of intersections are required during the zoning process.

The County placed a limit on the development that stipulates the number of overall PM peak-hour vehicle trips it generates cannot exceed 1,377. 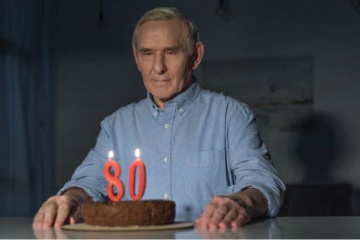