After years of stability, we are going to have a LOT of new faces on the Pompano Beach City Commission next year. Only two incumbents are running for re-election out of five districts. We will also be getting a new mayor due to Mayor Lamar Fisher’s decision to run for the Broward County Commission. The four candidates for mayor are: Cynthia D. Floyd, Rex Hardin, Desbresia Nathel Lasane and Mike Sobel. Hardin and Sobel are already on the city commission and are considered the front runners at this point.

Charlotte Burrie, longtime district two commissioner, had been planning to run for mayor, but in a surprise move decided against going for either mayor or her commission seat. The announcement caught some off-guard and wondering her reasoning. I’ve been told by several sources that her withdrawal was not due to any medical concerns, thankfully, but more so because she didn’t want to cause a splitting of votes between herself and Hardin. Ms. Burrie did not respond to requests seeking comment. Burrie and Hardin have come to represent the status quo in Pompano Beach, including continuing the efforts of the Community Redevelopment Agency (CRA) and its work with Regional Management Associates (RMA), the consulting team responsible for much of the new development in the city’s two redevelopment zones (the beachfront and Old Town). Sobel has tended to position himself as an upstart, questioning many previous commission decisions and looking for alternatives for future plans.

This might be an oversimplification, but if you are generally happy with the way the city has progressed over the past half decade or so, Hardin is probably your man. If you think we need to make serious changes moving forward or want new blood, Sobel, Floyd and Lasane are likely the candidates to take a look at. In other news…

Did you know that St. Martin Episcopal, the church right next to the bridge on East Atlantic Blvd. has been sold? Father Bernie Pecaro told me changing demographics, continual repairs and upkeep costs for the 60-plus-year-old building and an opportunity to get top dollar for the prime waterfront property, were all factors considered before making the difficult decision to sell. The buyers of St. Martin Episcopal also recently purchased the Atlantic Square Shopping Center (Umbertos, Dollar Tree, 26 Degree Brewery, etc.). In the next year or so, the church will temporarily relocate to the shopping center, while determining its long-term plan. The developer has BIG (and controversial) retail and residential plans for Atlantic Square, but what they plan to do with the church property specifically is not yet known. I’ll keep you in the loop as I learn more.

Stay up to date

One of the goals of this column is to keep you up-to-date on the progress of the many projects happening around the city. So…

• The new fishing pier is more than half way done and on schedule to open in March 2019.

• As for the shops and restaurants being built near the pier, the Oceanic restaurant is also looking to open in March 2019. Lucky Fish, the open air, tiki bar on the sand, and Alvin’s Island beach apparel shop are both hoping to get construction started in the next month or so.

• By the time you read this, the Atlantic Boulevard Bridge project is expected to be in high-gear, which will mean a few months of lane closures. Construction teams plan to complete that phase before snowbirds return and make traffic totally crazy. The bridge project is projected to be finished by the middle of next year.

Did you know that fireworks aren’t actually legal for general use in Florida? Yes, you can buy them at Publix and hundreds of other places, but the only legitimate reason to purchase them is to scare away birds from agricultural areas and fish hatcheries. I never realized how many hatcheries are located in my neighborhood.

And, speaking of illegal substances… a boater was fishing off the Pompano coast on July 2 and caught a big bale of marijuana. The naive, er…good, citizen promptly buzzed the good men and women of the Coast Guard who swiftly bogarted the haul. We’ll keep you posted on the date of a possible upcoming Coast Guard bake sale. 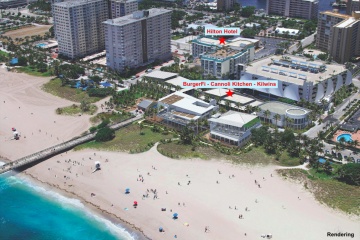