FLORIDA. NEVER A DULL MOMENT. ANOTHER CLOSE AND MESSY ELECTION HAS PUT THE NATION’S SPOTLIGHT ON US ONCE AGAIN. The statewide races and recounts have had an effect all the way down to the local level where the Pompano Beach Mayor’s race also required a recount that delayed declaring a winner.

Regardless, our city has a new mayor and three new city commissioners, a big change from the stability we have seen over the past decade or so. After more than ten years as Pompano Beach Mayor, Lamar Fisher is moving on to his new post on the Broward County Commission. Fisher easily won his race and his victory means all nine members of the commission are now Democrats.

While the two incumbents faced some very strong challengers, who we hope will continue to be involved in Pompano Beach politics, it is probably not bad there will be two returning members to the commission to ensure a level of stability.

As for the Mayor’s race, Rex Hardin declared victory on Nov. 15 after Broward County’s machine recount was sent in late and not accepted by the state. The previous tally showed him with a 128 vote lead over Mike Sobel, out of over 32,000 votes cast. At the time this magazine went to press, the Broward SOE had not certified the election, but there doesn’t seem to be any reason to believe the lead will change.

Regardless, the city’s priorities will be the same. I’ve heard from many residents over the past few months and these seem to be the most important issues for the new mayor (and commission) to take on:

1) The future of the East and Northwest CRAs needs to be resolved. I am hoping for a continued strong presence of Regional Management Associates (RMA), the outside agency that has led CRA efforts for almost a decade.
2) Transparency and communication in the City has not always been what it should be. A quick improvement needs to be made.
3) There seems to be a healthy dose of concern that the needs of developers ocassionally supersede the needs of current residents in all areas of the city, especially along Atlantic Blvd., the beach area and the northwest region of the city.
4) This goes hand-in-hand with an increased emphasis on quality of life for existing residents. Improvements need to be made, especially in the northwest area.
5) I am especially worried we haven’t adequately addressed the increase in traffic created by increased development, and I know I am not alone in this regard.

The last three points are quickly coming to a head revolving around one issue: the proposed reduction of the Atlantic Bouldevard/Dixie Highway corridor from three lanes to two (in order to provide a more walkable downtown area). I can’t imagine how this could work out. District Five commission candidate Leila Moavero offered a terrific suggestion on how to address this, “Cone it off. Try it out for a few months and see if we like it [before implementing a permanent solution].”

Congrats to our winners. Enjoy your holidays. We look to you to resolve these issues in the coming year.

Jeff Levine is the Editor-at-Large of Pompano! magazine. Email him at jeff@pointpubs.com 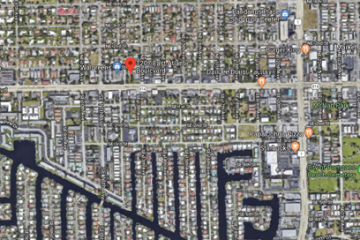