Proposed moratorium could block Highland Oaks project, and bring lawsuit against the City.

Broward County recently approved $26 million in financing for Highland Oaks, a new affordable housing community proposed to be built in Pompano Beach. However, the project could be blocked by a temporary moratorium the City wants to impose on the construction of affordable housing developments. The developer says that could result in legal action being taken against the City.

City officials are concerned about the clustering of affordable housing projects in low-income areas in Pompano Beach, and the moratorium, which would be for six months, would give the City time to “evaluate and adopt housing deconcentration policies and regulations.” Last month, the City Commission approved the moratorium on first reading in a 4:2 vote.

“I know there is a tremendous need throughout the county and the southeast region for affordable housing, but to have it concentrated in one community or one city I don’t think is a good idea,” said Pompano Beach Mayor Rex Hardin.

Hardin said the amount of affordable housing in Pompano Beach far exceeds what some of the other municipalities in the county are offering.

In 2016, the City hired the Lambert Advisory Group to evaluate the city’s market rate and affordable housing markets. The concern raised by the Lambert study was that the city has a concentration of low-income housing in certain areas, which has a negative impact on families and neighborhoods.

Earlier this year, the U.S. Department of Housing and Urban Development (HUD) did a survey of where affordable housing is currently located in Pompano Beach and found that it’s clustered in low-income and high minority areas.

Hardin noted that most of the affordable housing projects in Pompano are in the northwest and southwest communities.

HUD requires a balanced approach to the location of affordable housing, meaning low-income persons should be able to reside in high opportunity areas.

The City has already taken some actions to address this, specifically in its Comprehensive Plan, which has a policy for deconcentration of poverty.

The Highland Oaks project consists of 138 rental townhomes that would be built on a 10.75-acre site at 921 NW Third Avenue, just east of Blanche Ely High School.

Coral Rock Development Group and the Paragon Group of Florida, both based in Coral Gables, are behind the $30 million project.

The Highland Oaks townhomes would be adjacent to another affordable housing development, called Sonata Apartments, which is currently going through the city’s permitting process. Sonata Apartments consists of 121 rental units that will be built on the west side of North Dixie Highway at NW 8th Street. Both project sites are within the city’s Northwest Community Redevelopment Agency (CRA) district.

Like Sonata Apartments, the Highland Oaks townhomes would be for individuals and families with incomes at or below 60% of the area median gross income for Broward County, as published by HUD.

Highland Oaks rents would be $1,113 for the two-bedroom units and $1,287 for the three-bedroom units, which Wohl said is below 40% of market rent in Pompano Beach.

Financing for the project also includes tax-exempt bonds in an amount not to exceed $21 million that are being issued by the Broward County Housing Finance Authority (HFA). The bonds are eligible for a 4% low-income housing tax credit. The closing on the bonds is currently anticipated for March 2021.

Last July, at a public hearing held by the HFA regarding the issuance of the bonds, Pompano Beach CRA Director Nguyen Tran voiced opposition to the funding of the Highland Oaks project due to its proximity to the Sonata Apartments, and the existing high poverty conditions of the area.

“Our goal is always to try to deconcentrate poverty, and putting the Highland Oaks development right next to another affordable development, serving the same income group, is not a good practice,” said Tran.

Mayor Hardin said his biggest concern about having a concentration of affordable housing projects is that it limits the economic development of an area and the ability to attract businesses, because there’s no economic base to support the businesses.

“People will have less discretionary income to spend on other things,” said Hardin.

“We’re housing working families, not impoverished people,” said Wohl, “and we’re giving them a lower rent level that will enable them to have discretionary income to spend within the community. It does nothing but help economic development.”

Wohl said there are over 7,000 renters in Pompano Beach who are considered to be extremely cost-burdened renters, meaning they pay over 40% of their gross income for rent.

That statistic is from the Broward County Affordable Housing Needs Assessment, a 2018 study carried out by the FIU Metropolitan Center.

“That is an extreme number of cost-burdened renters in the city,” said Wohl. “That’s what this project is going to be addressing.”

Once a family or individual qualifies to rent a Highland Oaks townhome, they can continue to live there even if their annual household income grows, as long as it does not exceed 150% of the area median gross income for the county.

Wohl added that, at the end of the first year, renters will have the option to put 5% of the rent paid in escrow, and to use it in the future as a down payment for the purchase of a home.

Wohl, who has 22 years of experience in the affordable housing sector, has already built two projects in Pompano Beach – Pinnacle Village on Powerline Road, and side-by-side developments Golden Square and Golden Acres, which are owned by the Housing Authority of Pompano Beach.

Wohl said that if the City blocks the Highland Oaks project because of concern about having two affordable housing projects next to each other, that would be a violation of state and federal fair housing laws.

“You can’t discriminate based upon affordability,” said Wohl.

Michael Moskowitz, the attorney representing Pompano Beach Living, LLC, the owner of the project site since 2007, expressed strong opposition to the proposed moratorium, which he said was “poorly conceived, rushed, and based on an old housing study.”

Moskowitz told the City Commission he was concerned that the moratorium was “motivated by the City’s openly stated opposition to Highland Oaks being developed as an affordable housing project.”

“This initiative is much bigger than one project,” said Development Services Director David Recor.

Moskowitz said that if the moratorium is passed, and it negatively impacts the project, legal action will be taken.

“It exposes the City to all types of potential liability, injunctive relief, damages, punitive damages – none of which we are interested in engaging in,” said Moskowitz.

In 2010, Pompano Beach Living, LLC submitted plans to the City for the Highland Oaks project, and subsequently obtained development orders and some of the building permits, which are still active. The plan was to construct 138 townhomes, although they were not designated as affordable housing. The new developers want to make some modifications to the already approved site plan.

Pompano Beach Living, LLC may have vested rights that would exempt the Highland Oaks project from the moratorium, but that would need to be determined by the City.

The City Commission is scheduled to cast its final vote on the moratorium at the second reading on Jan. 26. Commissioner Beverly Perkins of District 4, where the Highland Oaks townhomes would be located, voted against the moratorium on first reading, as did Commissioner Cyndy Floyd of District 5. Perkins said the developer of Highland Oaks assured her it would be a gated community, which is something she was trying to get in her district. 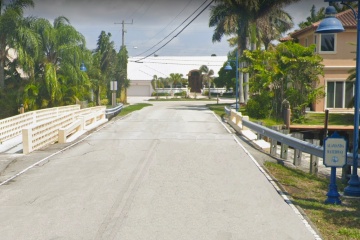