NEW POMPANO BEACH SHUTTLE SERVICES: The City of Pompano Beach is planning a park-and-ride system that will connect residents and visitors to various destinations in the beach area, along Atlantic Boulevard and Downtown Pompano via golf cart and trolleybus.

“Our intention is to reduce congestion and traffic, as well as reduce emissions on the barrier island and in Pompano Beach,” said Jeff Lantz, the city’s parking operation manager, who presented the plans for the project at the East CRA Advisory Committee meeting on Feb. 6.

The first phase of the proposed Pompano Beach shuttle service/park-and-ride system, which could be in place by the end of 2020, would be a free service using electric golf carts that hold 5 to 7 passengers, including the driver. The route would go up and down the barrier island, as far north as the Marriott hotel and the Residence Inn on A1A, and as far south as Atlantic Boulevard, where it would cross over the bridge and go to the Harbor Village Shops.

There would be an on-demand component that would allow anyone wishing to use the service to request a pick-up at any location along the route, including their residence or hotel, using a mobile app.

In addition, the golf carts would make regular stops at various locations along the route at regular intervals. Some of the locations being considered are the Marriott hotel, the Beach House and Oceanic restaurants, the Pompano pier, the Pier Parking Garage, the Foundry restaurant, the Pompano Shopping Center where Publix is located, and the 26 Degree Brewing Company. Future stops could include Alsdorf Park and the Hillsboro Inlet Park.

There will be a stop at a paid public parking lot that the City has just set up at 3300 SE 1st Street. The lot, which has approximately 120 parking spaces, lies just south of Atlantic Boulevard, between A1A and Hibiscus Avenue, west of the Bank of America building, and south of Walgreens. The City has a one-year lease with the property owner, Pure Residence Resort, which plans to eventually construct an extended stay hotel with ground floor retail on the site.

The lot is intended to meet the need for additional parking created by all the new development on the barrier island, including the Pompano Beach Fishing Village, and to accommodate cars that will be displaced from the Oceanside parking lot while a new parking garage is being built.

Funding for the park-and-ride system is expected to come from advertising on the golf carts, grants available for low- or no-emission vehicles, and possibly parking fees.

“We’re hoping to be cost-neutral to the City on the golf carts,” said Lantz.

The City Commission would have to approve the issuance of the bid, as well as the contract with the selected company.

The second phase of the Pompano Beach shuttle service/park-and-ride system would run further west along Atlantic Boulevard, all the way to Old Town, City Hall, the Cultural Center, and the future Innovation District. It could potentially go to the Isle Casino.

The second phase would use a trolleybus, or some other shuttle vehicle, that is electric, or that uses propane or compressed natural gas. Based on demand, the size of the shuttle could be for 16 passengers or more. The shuttle service may or may not be free, but a monthly fee or day pass could be offered.

The plan is to have multiple lots in the Atlantic Boulevard corridor where people can park and connect to the park-and-ride system. Lantz said this will provide a parking alternative for employees working on the barrier island.

A timeline for the second phase of the system has not been set yet.

The first phase would probably start out with two or three golf carts, said Lantz. If there is demand, and the golf carts aren’t sufficient, more could be added, or larger vehicles such as the trolleybuses could be implemented sooner. 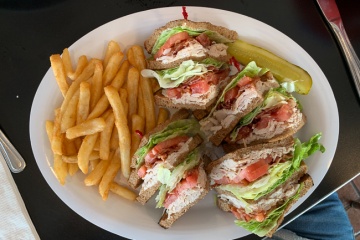