Oceanic Is positioning Itself to be the newest crowned jewel of Pompano Beach’s oceanside dining scene. The restaurant’s founders, the Moshakos Family, recently gave Pompano! Magazine an inside look at what diners can expect.

The Moshakos family — Lou and Joy, the founders of LM Restaurants, and their daughter Amber, now LM’s president — are the brains behind Oceanic, the new, highly anticipated oceanside restaurant soon to open right next to the new Pompano Beach fishing pier.

On July 31, the warm and hospitable family gave Point! Publishing a private tour of Oceanic, which is still under construction but is in the final phases of its completion. With caution, Lou said the restaurant should, hopefully, be completed and later this month or in September, barring any unforeseen hurdles.

The word “wonder,” Amber said, has been the central word from which her family and their team conceptualized the restaurant’s architecture, design, menu, bar program and atmosphere. They were looking to capture the enchanting essence of the sea and pay homage to the restaurant’s majestic beachside location.

“The concept idea from the beginning was how do we capture that awe and wonder of the ocean?” said Amber. “Thinking of those transatlantic voyages so many years ago, how do we create that awe and wonder? There’s a Jacques Cousteau quote that completely captures the essence of what this brand is going to be: ‘The sea, once it casts its spell, holds one in its net of wonder forever.’”

Upon taking the tour, it became apparent just what Amber meant. The oceanside restaurant indeed casts a certain spell.

The design is both ethereal and captivating. It was envisioned, Amber said, to evoke the feeling of being in the hull of a grand ocean liner. Arched wooden beams in the ceiling, massive glass windows peering out over the ocean and shades of blue throughout capture this spirit. The main dining room is lined on both the east and south sides with vast, floor-to-ceiling glass doors, which slide open and extend out to the bar, lounge and patio deck. Expansive views of the ocean are on every side, and the patio overlooks Pompano Beach’s new fishing pier. The old fishing pier building stands adjacent to the restaurant, maintaining a sense of the area’s historical roots.

On the west side of the first floor is a grand, circular dining room with a cavernous, 25-foot-high ceiling. Cascading shades of aquamarine, teal and blue lead upward to skylights. Colored, oval pieces of glass dangle high from the ceiling catching light from the windows and evoking an abstract sense of fish swimming under water. The room makes one feel as if they are standing in the center of a mythical aquarium.

Frayed boat ropes hang Edison bulbs in the front entrance, and modern art pieces made of ocean drift wood are spotted throughout the first floor design. In addition to the drift wood elements, Amber said her family saved some of the historic wood from the original Pompano Beach Fishing Pier to craft a cool entrance table with artifacts from Pompano Beach’s oceanside history.

All together, the restaurant is 20,000 square feet, with more than 9,000 of those open-air. Creating such a magnificent restaurant was no small feat. The project, Lou said, has been five years in the making and has gone through three architects and three design teams. Lou said that just when he thought his architectural plans were complete and ready to go, Amber sent him back to the drawing board urging him to think bigger. She wanted the entrance to be grander and more welcoming.

“I said, ‘We dan do better than this,’” Amber recalled. “We asked the second architect to dream. He came back with this idea of the hull of a ship. The first architect was an absolute specialist when it came to operational layouts and where you put the drains and how you get the flow and where are your operational challenges. The other architect was more the visionary on how do you really transform what this architecture is going to look like.”

The results are stunning, from both the interior and exterior.

Like the architecture and design, the menu has been crafted to honor the ocean.

“The fresh local seafood is the emphasis,” said Executive Chef Brian Cantrell. “We’re going to be offering fresh seafood and local fish everyday. We’ll do a whole fish every day. Our featured menu is going to be very large. Its going to have all of our raw bar on it — so our fresh oysters and our shellfish and shrimp cocktail, and lobster cocktail. Then the fish we’re doing is local stuff — grouper, cobia, mahi — whatever is the freshest. We’ll have a great offering of high-end steaks as well.”

Cantrell has an impressive career working in high-end seafood restaurants all over South Florida.

“I was in Miami Beach for ten years. I opened up Prime 112, was the chef at Nemo for six years, and was at a Fish Called Avalon on Ocean Drive for three years,” Cantrell said. “I worked at Blue Moon here in Fort Lauderdale for about five years and helped them when they remodeled and re-did their menu as well. And more recently, I was in Deerfield at Oceans 234 and Gigi’s in Hollywood.”

Cantrell’s motto is “What grows together, goes together.” Diners can expect food that is bold, colorful and healthy.

“I try to give a lot of big flavors — not muddled and very health-oriented,” he said.

The bar program at Oceanic is rather progressive. The restaurant will offer 24 wines on tap. Wines on tap, though not common, is a concept that is growing in popularity in the restaurant industry because the dispensing system allows for custom temperature pours and is a more eco-friendly system. One keg of wine equals more than 26 bottles of wine, and over a keg’s lifetime 3,000 bottles will avoid landfills. LM Restaurants started pouring wines on tap at some of their restaurants eight years ago.

“This keg system allows us to pour a wine at the perfect temperature every single time. And from a guest perspective, they’re able to taste different wines that sometimes would be out of their price range. Plus, you can taste it before you commit to an entire bottle,” she said. “So you get a better value on a glass of wine, a better product, and at the same time are more eco friendly. So we feel it’s perfect.”

In addition to wines on tap, the restaurant will offer craft cocktails on tap, as well as a regular menu of craft cocktails made with fresh ingredients — a menu planned by a team of LM Restaurant’s best mixologists.

“Were putting as much emphasis and focus on our bar program as we are our culinary and our hospitality,” Amber said.

Oceanic is really a coming home story for the Moshakos family who started LM Restaurants more than 41 years ago in Deerfield Beach. Their first restaurant, Seafood Shanty, was opened in 1978 at the corner of Hillsboro and Federal, where the Walgreens now sits. Seafood Shanty was a 48-seat restaurant and the “quintessential family business,” said Amber.

“My mom was cooking in the kitchen until mom was pregnant with me…Dad was working the raw bar. My aunt served. My grandmother was the hostess at various points. So it was truly a family run and started business,” said Amber.

In the 41 years the Moshakos family has been operating LM Restaurants, which is now based out of Raleigh, N.C, the group has opened up seven restaurant concepts including Vidrio, Bluewater Waterfront Grill, Hops Supply Co., Taverna Agora, Carolina Ale House, Oceanic and Henry’s.

Amber said the success of LM can be attributed to Lou and Joy’s working partnership.

“Watching them dynamically work together — its magical,” she said. “Mom’s strengths complement dad’s. Dad is the visionary and he sees things so far ahead of time. And then mom is the one that can be systems, process, meticulous details.”

Lou grew up in a farming town in Greece before immigrating to Canada. Joy’s lineage is from Newfoundland — a community of tight-knit fisherman. The couple, Amber said, inherited the same core values.

“They are very family driven and focused on the earth and the community,” she said. “I think it’s because they came from fishermen and farmers.”

The Moshakos try to instill those values in LM Restaurants, making staff family, honoring the communities and cultures in which their restaurants operate, sourcing fresh ingredients and promoting eco-friendly practices.

Lou said he’s thrilled to have taken LM Restaurants full circle and landed back near Deerfield Beach: “This is a really exciting time for our family to be coming home to where it all began.” 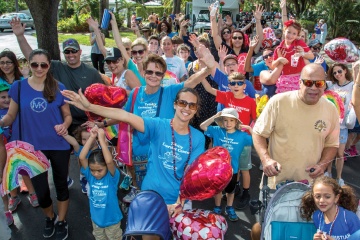