POMPANO BEACH DIXIE HIGHWAY DEVELOPMENT- A 229-unit development is planned for property located at 1621 S. Dixie Highway, on the southwest corner of West McNab Road and South Dixie Highway, which, until recently, was a junkyard for wrecked vehicles.

The proposed project, called Aviara East, consists of one six-story building with residential units and up to 14,000 square feet of ground floor commercial space, and one eight-story building that is solely residential. Amenities include a pool and clubhouse.

The project is part of the City’s vision of creating an Industrial Crafts district along the Dixie Highway corridor between McNab Road and Atlantic Boulevard. The Pompano Beach Dixie Highway development concept is for the area to embrace its historical industrial character and transition to an urban workforce corridor that mixes work spaces and housing with shopping, dining, and entertainment, while tying into the fabric of surrounding single-family neighborhoods.

Based on the Dixie Highway Corridor Study completed in 2013, the goal is to develop 520 new residential units (780,000 square feet) in the Industrial Crafts district, as well as incubator space to help develop new small businesses.

The City Commission, at its meeting on Oct. 22, approved an application from the developer of Aviara East to rezone about half of the 5-acre project site from “heavy business” to “general business” to allow a mixed-use building with residential uses.

At its previous meeting, the City Commission approved the allocation of 188 “flex” residential units for the project, which will be added to the 41 residential units permitted by the property’s existing land use designation.

Vice Mayor Barry Moss said “flex” units are something the City has in its toolbox that can be granted to a developer to “encourage good development in a place where it needs to happen,” and the Aviara East project is “eminently worthy.”

“This is a classic example of what is a good thing to do with flex units,” said Moss. “We’re taking a junkyard and we’re turning it into an economically productive area where people are going to live and work and shop and enjoy life.”

Because the property had never been platted, or officially mapped out, the developer submitted an application for a plat, which was approved. The plat restricts the property to a maximum of 20,000 square feet of commercial use and the 229 mid-rise residential units.

A 3,000-square-foot commercial building that currently occupies the project site will be demolished. The vehicles that were stored there have been removed, and the soil is being remediated. Over the coming months, the project will go through the City’s site plan approval process.

“It’s exciting to see the beautification happening over there, and to see a project like this coming in,” said Commissioner Andrea McGee.

Commissioner Tom McMahon of District 3, where Aviara East is being developed, said the property had been an “eyesore” for many years, and the project shows that “progress and great things” are happening in the city.

As part of the City’s vision of creating the Industrial Crafts district, another developer is planning a similar project further north, at 1091 S. Dixie Highway and SW 11th Street. The project, called Aloha 1, consists of 140 affordable workforce housing units in four 4-story buildings, one of which will have ground-floor commercial space fronting Dixie Highway.

MAG Real Estate & Development, the developer of Aviara East, is currently building a townhome project in Lake Worth and an apartment complex in West Palm Beach. The Boca Raton-based developer also has plans to construct an office building in Pompano Beach on property at 1200 NW 31st Avenue, in the Collier City neighborhood. 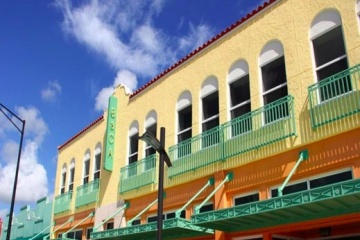