POMPANO BEACH REDEVELOPMENT: A mixed-use (residential and commercial) project being planned in Pompano Beach on a 4.97-acre collection of parcels located south of East Atlantic Boulevard and north of SE 3rd Street, between SE 17th and SE 19th Avenues, continues to wind its way through the City’s approval process.  The property includes the current site of the historic McNab House.

A number of residents who attended a community meeting at the Emma Lou Olson Civic Center on Monday night expressed concerns about the mixed-use project, called Atlantic One.   These included density, increased traffic and insufficient parking. The meeting, which became heated at times, was organized by the developer and presented by the zoning attorney and the architect of the project.

The project would consist of five-story multi-family residential buildings and a total of 24 three-story townhomes. As per the requirements of the ETOC, the townhomes would be on the edges of the project that are close to single family homes, duplexes or other townhomes.

Acknowledging that traffic “frequently, is the biggest concern,” the zoning attorney said the traffic study carried out as part of the City’s review process showed that during the morning peak hour approximately 90 new vehicular trips would be created by the project, and during the afternoon peak hour approximately 110 trips would be created, which equates to about two additional vehicles per minute in the morning, and about three additional vehicles per minute in the afternoon.

Based on its review of the results of the traffic study, the City is requiring the developer to provide a left-turn lane for northbound SE 18th Avenue as it approaches East Atlantic Boulevard.

The goal is for the residential units to be market rate rental apartments or condos, or a mixture of both, and about 65 percent will be one-bedroom units. A woman in the audience said that rentals will drastically reduce the property values of the homes in the vicinity of the project.

Another attendee said he was “all for the project,” and thinks that property values will actually go up, “but the parking, with all due respect, is going to be a problem.”

“I’m hoping that the developer will hear every true concern that we have,” said a resident.

“That’s the purpose of the meeting,” said the zoning attorney.

>>> POMPANO BEACH MCNAB HOUSE/PARK STILL IN FLUX; PICTURES OF WHAT IT MAY LOOK LIKE; WHAT DOES THE PUBLIC THINK?

The Atlantic One project has gone before the city’s Development Review Committee for site plan and building design approvals, which the developer needs in order to obtain a building permit.

On June 4, the Architectural Appearance Committee voted unanimously in favor of the project, but the Chair did suggest that some type of traffic calming feature be installed at the intersection of SE 2nd Street and SE 18th Avenue, “because there is a lot of traffic that’s going to be created, there’s no doubt.”

The project is scheduled to go before the Planning and Zoning Board on June 26. A groundbreaking would not take place for about another two years, and currently the plan is to build the entire project in one phase.

The property for the Atlantic One project was purchased by the developer from the McNab family last December.  It will be one of the larger Pompano Beach re-development projects taking place over the next few years.

This past March, in an effort to save the historic McNab House, the Pompano Beach CRA announced the intention to move it down the street to the current site of McNab Park.  Plans call for it to be turned into a restaurant.  Two small bed and breakfast like hotels may also be built on the park grounds. How much of the existing park’s facilities will remain has still not been determined.

The picture gallery below includes pictures of the McNab House on Atlantic Blvd., artist renderings of what the developers expect the big Pompano Beach redevelopment project to look like, an aerial view rendering of the areas that will be redeveloped and a Google map showing what that area current looks like.  Courtesy Photos: Google and Atlantic One 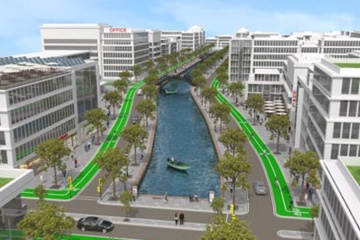