The plan is to move the historic McNab House a few blocks east on Atlantic Blvd. in Pompano Beach to the current home of McNab Park.  However, some residents are wondering whether or not the house, which would become an upscale restaurant, should replace a local neighborhood park.

Complaints from residents have seemingly caused the Pompano Beach CRA to take to offense.  They recently sent out the release titled, “Exciting New Concept for the McNab House – Saving a Piece of Pompano Beach’s History.”  The press release led some residents to think the project was close to being finalized.

The Mayor says differently, however.  According to him, the deal is far from done as it has not yet “come before the CRA Board, which will make the ultimate decision on how we move forward on the issues.”  He added, “As to the McNab House move – I am in favor of moving the house as a way to preserve part of the history of our City. As to what any future restaurant, bed and breakfast, or gardens, will be included or will look like, that is yet to be determined.”

Hardin says that he would like to find a way to address the “recreational opportunities that will be displaced by relocating the house to McNab Park.”  He mentions the possibility of creating a new park in the area, but says those plans, “are yet to be worked out as well.” Additionally, “there may be changes that take place over time to make a better project at McNab Park. We do need to move the house though. That is step one.”

“I am in favor of preserving what history we do have in our area. That has been done with the Ali building and BACA in the West CRA. Now we have an opportunity in the East CRA with the McNab house,” Hardin added.

The Pompano Beach landmark is currently located at at 1736 E. Atlantic Blvd. It was built in the 1920s by members of  The McNab family, early settlers in the city.   It’s the house with the big grass lawn and the single family house sitting majestically a  hundred feet or so back, in case you can’t place it.

Late last year, the property was purchased by a developer for more than one million dollars.  Their plan calls for a mixed used development Atlantic One. The three to five story buildings are expected to include ground-floor retail space and over over 300 apartments and townhouses.

Instead of tearing down the McNab house, proposals came out to move the house to the 2200 block of East Atlantic Blvd. That block currently consists of the Pompano Beach Chamber of Commerce building and the small community park also named after the McNab family.

The CRA is recommending that the home be turned into a McNab House restaurant, most likely with an upscale menu and clientele.  Possibly two bed and breakfast hotels and a botanical garden could also be developed on the site.

Tell us what you think…

Is the McNab House restaurant and Bed and Breakfast(s) a positive for Pompano Beach?  Preserving an historic home and creating a new destination restaurant in Pompano Beach?  Or, is it an example of overdevelopment, eliminating a popular park used by residents of all ages?  We’d like to know your thoughts.  Please add your comments to this page.

The restaurant with the most violations in Broward is located in Deerfield Beach.

Newsweek picked 8 Diving Wonders in the World. One of them is in Pompano Beach 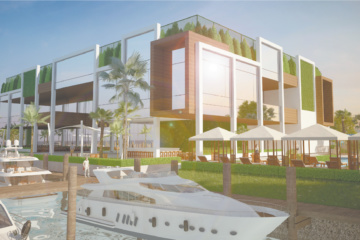