The developer wants to build at least 4,100 multi-family residential units. The rezoning request, scheduled to go before the City Commission for first reading on Sept. 10, would create a Planned Commercial Development (PCD) district, providing more development flexibility than the current zoning, which allows for commercial recreation, commercial and industrial uses, but not residential.

The property is being redeveloped by The Cordish Companies in partnership with Eldorado Resorts, which purchased Isle of Capri Casinos’ 13 resorts in 2016. The Baltimore-based Cordish Companies develops, owns and operates Live! entertainment destinations across the country.

The 232-acre project site, located on the southeast corner of Powerline Road and SW 3rd Street (Racetrack Road), currently contains a harness racing track and grandstand (which will be razed), a 45,000-square-foot casino, and 112,000 square feet of commercial space.

New details about the redevelopment project were provided at the Planning and Zoning Board meeting.

Abe Rosenthal, senior development manager with The Cordish Companies, said discussions are underway with “a fairly substantial ice hockey training facility” that wants to be included in the project.

Discussions with a supermarket are advancing, and a deal is expected to be reached. In addition, a “very positive response” was received from a handful of local retailers that were contacted about being part of the new development.

As part of the request for rezoning, the developer wants to build two office buildings and four residential buildings with a maximum height of 400 feet, or about 35 stories. Located at the development site’s interior, the six buildings would be “a way to create the type of density and intensity that the project will need to be successful,” said Debbie Orshefsky, the attorney representing the developer.

Buildings on the northwest and southwest corners of the site would not exceed eight stories, which is about 100 feet. Throughout the remainder of the site, the building heights could be up to 200 feet.

Buildings on Powerline Road and SW 3rd Street would be required to be built with a 10-foot landscaped setback. Building heights along the setback line would be limited to a maximum of 75 feet, and any portion of a building that rises above 75 feet, would have to “step back” an additional 10 feet. The buildings would not be allowed to exceed 300 feet in length.

Fred Stacer, chairman of the Planning and Zoning Board, said the possibility of having 200-foot buildings along Powerline Road was “concerning…I don’t want any excessive heights on Powerline Road; I’d love to see it in the 150-foot range.”

Rosenthal said not every building along Powerline Road would necessarily be 200 feet high, “but if that’s what the market demand is, we want to have the flexibility to meet that.”

Stacer also said that he is “uncomfortable” with the six proposed 400-foot buildings, noting that Pompano Beach has a handful of buildings that are about 300 feet tall, but none higher.

“This is going to be enormously, powerfully big,” said Stacer.

Rosenthal explained that 400-foot-high buildings were being requested “just to have the ability to bring both the office and residential users that might be in demand five, seven, 10 years from now.”

“It would be unfortunate if the demand was there and we were precluded from doing it, and so we wanted to provide the flexibility to do that,” he said.

Another member of the Planning and Zoning Board said she’s “a little scared about the 400-foot height also,” but is excited about the project.

Due to the height of the buildings, the developer will need to obtain an airspace obstruction permit from Fort Lauderdale Executive Airport.

In the corporate district planned for the northeast corner of the site, six buildings with 1,400,000 square feet of office space could ultimately be built to attract either a regional or national corporate headquarters.

“We think we can get it,” said Rosenthal, who sees it as an opportunity for a company to provide their employees with an environment where they can live, work and play.

Orshefsky said no other site in South Florida could accommodate a mega company, such as Google or Amazon, if they walked in tomorrow and said, “We want to build a headquarters; we need a million square feet.”

Most of the residential development is planned for the south side of the project site, adjacent to the Cypress Bend neighborhood. The new residential buildings will have mixed-use on the ground floor that could include neighborhood retail, such as a grocery store or drugstore.

Each residential development will include private recreational amenities, such as swimming pools, fitness centers, meeting rooms and passive outdoor areas.

A “crystal lake,” or lagoon, will be centrally located within the development, contemplated as a 12- to 15-acre water feature to be used for activities such as swimming, kayaking and paddle boating. A special liner using a patented filtration system would keep the water clean and clear. The lake is projected to cost about $1.5 million per acre, said Orshefsky.

The north half of the lake would be open to the public. The southern half might be accessible only to the adjacent residential units.

The project will be surrounded on three sides with multi-purpose buffers to provide for landscaping, drainage and trails for walking and biking. Along SW 3rd Street and Powerline Road, the buffers will be 10 feet. On the south side of the project site, along the Cypress Bend residential community, there will be a minimum 50-foot buffer area.

The project may include a Tri-Rail station along the CSX Railroad, just east of the development site. The South Florida Regional Transportation Authority recently approved a resolution supporting the potential Tri-Rail station.

The developer is seeking funding for the station at the federal level, as well as working through the Metropolitan Planning Organization, the City, the County and the state.

The Tri-Rail station could enhance the developer’s ability to attract a corporate headquarters, since employees might live in West Palm Beach or Miami and take the Tri-Rail to work.

Whether or not Tri-Rail comes, there are plans for an internal shuttle service using autonomous vehicles throughout and possibly connecting to Cypress Bend to the south, and Palm Aire to the west.

An economist hired by the developer, Andrew Dolkart of Miami Economic Associates, said during construction of the project, approximately 23,000 jobs will be generated, including about 15,400 on-site construction jobs. The rest of the jobs will either be in related businesses or in businesses where workers spend their earnings on goods and services.

Approximately 16,000 permanent jobs are projected to be created, roughly 9,400 of which are on-site, not including the casino or the jai alai fronton.

When fully built out, the project could generate over $12 million in ad valorem revenues for the City of Pompano Beach, and will generate similar amounts for Broward County and the Broward County School Board, according to Dolkart.

There will be a major relocation of parking for the casino. Two parking garages will be built, providing about 1,500 spaces.

The residential buildings will have podium parking (garages at the base of the building). The developer has committed that no garage entrance will face a public road.

“This is a very, very big, complex project,” said Orshefsky. The vision is to create an urban mixed-use development, and to do so, it’s necessary to take the City’s code, “which in many respects is a suburban code, and translate it into an urban model.”

“The development team has taken very seriously the privilege and the responsibility to create a community within this community that will be almost an ‘extra downtown,’” Orshefsky added.

CLICK HERE TO CONTINUE WITH  PART TWO OF THE ISLE CASINO REDEVELOPMENT STORY, INCLUDING MORE THAN 4,100 RESIDENTIAL UNITS?,  THE TIMELINE TO MAKE THIS HAPPEN AND A LOOK AT THE TRAFFIC STUDY OFFERING WAYS TO MANAGE THE INCREASE IN TRAFFIC. 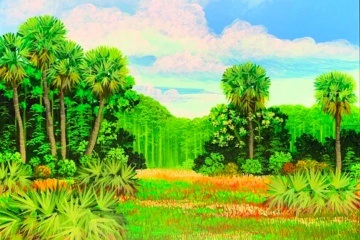