Throughout the decades, as Pompano Beach has grown and changed, the typical development plan has been to tear down what was there to put up what is new.  Over the years, we’ve seen most of the small motels along the beach make way for towering condos.

Now, developers are looking at a different model as the latest wave of development in Pompano Beach will dramatically change the city’s landscape in the next several years.  Instead of tearing it down, there are a few instances where the builders are trying to move historic structures to new locations that will allow them to live on, while utilizing the property that they currently reside on for new development projects.

Two specific projects have recently been announced and reported on in the Sun-Sentinel and other media with the goal of saving and moving existing Pompano Beach landmarks.  You’ve probably driven by them and maybe even noticed them.  Both are located on Atlantic Blvd.

The “McNab House”, located at at 1736 E. Atlantic Blvd., was built in the early 1900s by members of one of Pompano Beach’s founding families- The McNabs.  The house is the one that has the big grass lawn with the single family house sitting majestically a few hundred feet back.  It’s a few blocks east of the the Furman Insurance building (another Pompano Beach landmark).

Late last year, the property was purchased by a developer for $1,077,700.  Their plan calls for a mixed used development called Atlantic One.  It will contain some retail as well as over 300 apartments and townhouses.  They expect the buildings to be three to five stories tall.

So, where to move the historic McNab House? How about near the grounds of McNab Park, the small community park located next to the Pompano Beach Chamber of Commerce.  The exact location is 2250 E. Atlantic Blvd. That’s what Redevelopment Management Associates (RMA) is proposing according to the Sun-Sentinel.  RMA was the firm that led the Pompano Beach CRA initiatives until they offered their resignation last year.  The CRA projects are now overseen by the city itself while RMA continues to consult on the initiatives.

RMA is also recommending that the home be turned into a restaurant.  Could be a unique, quaint, traditional style restaurant in Pompano Beach.

The second structure looking for a new home is the old office of Dr. George McLellan. The small white structure which can be found on corner of Northeast First Avenue and Second Street was built in the 1920s and has had many functions since then.  Currently it is vacant.  However, back in the day, it was the office for McLellan, Pompano Beach’s first – and for a while only- doctor.

The doctor’s office, is a small piece of what will be a ten story, 280 unit apartment building called Old Town Square.  It is one of the many new projects happening in the Old Pompano area along Dixie Highway.

While some old landmarks like the Kester Cottages  and the “quaint” motels along the beach are long gone and never to be seen again, we applaud the efforts to keep some of historical Pompano Beach alive into the 21st century.

Pompano Beach To Get a Bar on the Beach 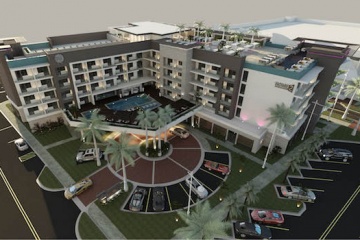