HIDDEN HARBOUR PROJECT: The City Commission, at its Jan. 28 meeting, approved rezoning for a 300-unit mixed-use development project off N. Federal Hwy in Pompano Beach, following the removal of two elements that had raised concern among a number of residents and city officials: a seven-story pedestrian bridge and 14,875 square feet of residential units over NE 23rd Avenue.

The project, officially known as Harborside at Hidden Harbour, is planned for a site located east of Federal Highway, north of NE 14th St. Causeway and south of NE 16th Street, with NE 23rd Avenue running north-to-south through the middle of it. The site is being developed by the owner of the adjacent Aquamarina Hidden Harbour marine facility, which will be incorporated into the project.

The City Commission approved the developer’s application to rezone the project site as a Planned Development Infill district last November on first reading. The master plan presented to the Commission at that meeting included the pedestrian bridge over NE 23rd Avenue, and residential units above arcades along the avenue’s east and west sidewalks.

In December, the City Commission, concerned about putting private residences in a public right-of-way, denied the developer’s request for a right-of-way vacation of the sidewalk areas, and as a result the project plans were revised.

“We essentially clean-sheeted that entire area of the project,” said Graham Penn, the attorney representing the developer, at last week’s Commission meeting.

Penn explained that two proposed buildings, one fronting NE 16th Street and one fronting Federal Highway, “have been pushed out of the right-of-way completely.” The plans still include an arcade element, but it will be entirely on private property.

In the new plans, a portion of a small, grassy lot on the north side of NE 16th Street that the developer intended to set aside for use as a public park is now slated as a valet parking area for residents of the building on NE 16th Street. The previous plan required those residents to park in a 562-space garage in the building fronting Federal Highway, and then walk to their units using the pedestrian bridge.

A valet drop-off area with five stacking spaces would be in front of the building on NE 16th Street, off the public right-of-way. The lot across the street would have nine spaces dedicated for use as an additional staging area in the event of a back-up.

“The transition has been altered slightly to recoup the space that we’re losing by creating the valet and by losing the units that were going to be in the arcades along the road,” said Penn.

In the current plans, the 9-story building fronting Federal Highway will include a ground-floor restaurant with a view down the Caliban Canal, and a marine retail space and showroom.

Those plans for the Hidden Harbour project also called for portions of 32 residential units to be built over the east and west sidewalks of NE 23rd Avenue (four units per floor on floors 2 through 9), supported by columns, and creating an arcade, or “colonnaded walkway” on each side of the avenue.

The marina’s existing dry boat storage building will remain, as well as boat slips for use by customers of the marina. Pedestrian promenades are planned along the waterway on NE 23rd Avenue and NE 16th Street.

Commissioner Tom McMahon cast the only ‘no’ vote on Jan. 28 for the rezoning of the project site, voicing concern about the density of the project and the valet parking on NE 16th Street.

During the public input portion of the meeting, a number of residents expressed concern about the density of the project and traffic issues, and overdevelopment of the city in general.

“It’s too big a project for this sized land,” said one resident.

Another resident said the proposed valet parking “is going to be a nightmare for 16th Street.”

Graham said the valet parking plan has been reviewed by the City’s consultants and City staff and was found to be consistent with code. It will be analyzed again during the site plan review process.

Before the site plan can go to the Planning and Zoning Board, the developer must carry out two traffic studies. One traffic study will look at maneuverability within the project, including all loading areas, driveways and the valet operation. The other study will review the functioning of the intersections of NE 14th Street at 23rd Avenue and Federal Highway. If any deficiencies are identified, the developer will be obligated to construct improvements to address those deficiencies.

Additionally, the developer must obtain approval for an Air Park Obstruction Permit from the Planning and Zoning Board.

Before last week’s vote, Mayor Rex Hardin said he thinks the Hidden Harbour project “will be a good quality development.” 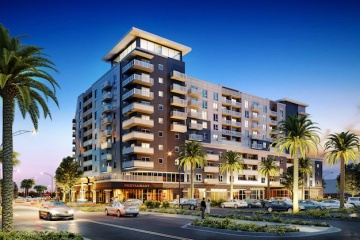