POMPANO BEACH PIER OPENING:  The newly reconstructed Pompano Beach pier, recently named the Fisher Family Pier, is getting closer to opening to the public after several delays. Construction of a final component needed for the opening – a signature arch at the entrance of the pier – began last Wednesday, and could be completed sometime in December. A new entry plaza to the pier, where the arch is being constructed, was completed last month.

The arch is meant to be an iconic landmark that will become immediately recognizable in Pompano Beach and beyond.

Once the pier is opened to the public, there will be a fee to access it: $2 for sightseers, and $5 for fishermen.

Completion of the arch was one of the primary obstacles delaying the opening of the pier, which was originally anticipated for July 4, and then was pushed to October. This was in part due to the ongoing construction of the Oceanic Restaurant and Lucky Fish Bar and Grill, which blocked access to the pier entrance area.

A date for the Pompano Beach Pier ribbon-cutting and opening, which the City says will be on the same day, hasn’t been set yet because it depends on when the arch is completed, and also on Lucky Fish Bar and Grill, still under construction, adjacent to the new pier entry plaza. Lucky Fish is projected to be completed in February 2020. The City has said it does not want to have a grand opening until it’s safe for pedestrians to access the pier.

The new plaza and arch are located at the west end of the pier, between Lucky Fish and the recently opened Oceanic, which are part of the beachside development project known as the Pompano Beach Fishing Village.

The plaza and arch were originally budgeted at $250,000, to be funded entirely by Pompano Pier Associates, the developer of the Pompano Beach Fishing Village. For various reasons, the cost to construct the plaza and arch exceeded the original budget by $400,000, and the Pompano Beach Community Redevelopment Agency (CRA) has stepped in to provide the additional funds.

The extra $400,000 includes all the permitting and engineering fees involved in the plaza and arch construction.

Mayor Rex Hardin said that even though the plaza and arch project is costing more, it will “pay huge dividends” in the long-term that will benefit tourism and residents.

The arch is intended to be a place where visitors will take pictures that will be posted to social media.

“Everybody across the world is going to begin to understand where Pompano Beach is,” said Paul Kissinger, a principal of EDSA, the firm that designed the plaza and arch, and that has also been involved in every phase of the development of the Pompano Beach Fishing Village, from master planning to construction.

The design of the arch emphasizes the city’s history as a fishing and water sports hub, according to EDSA.

The City, the CRA and the developer wanted the scale of the arch – just over 28 feet high (almost three stories) and 30 feet wide – to be substantial so it wouldn’t be overwhelmed by the distinctive architecture of the Oceanic restaurant beside it. They also wanted the arch to be large enough to be seen from a distance.

In addition, the circular concrete patterns of the plaza made it more complicated to install, according to EDSA.

Another factor that drove up the cost of the arch is a lighting system that was added so it can be illuminated at night. Only special amber-colored lighting approved by the Florida Fish and Wildlife Conservation Commission could be used, to ensure it is sea turtle friendly.

The arch will have orange acrylic lettering on both sides, so it can be seen by visitors when entering and exiting the pier. A fish representing a pompano will be made with dimpled aluminum that looks like the scales of a fish.

The main structure of the arch, which is made of hurricane-resistant rolled steel, was put in place last week.

The next phase will be to mount two custom-designed stainless steel surfboards, one on each side of the arch. The surfboards are in the process of being manufactured and are expected to be completed in five weeks, according to Dutchy Enterprises, the fabricator in Cocoa, Florida.

Last June, the Pompano Beach City Commission voted to name the new pier the “Fisher Family Pier,” in honor of the contributions made by former Mayor Lamar Fisher, now a Broward County Commissioner, as well as his family, to the city. 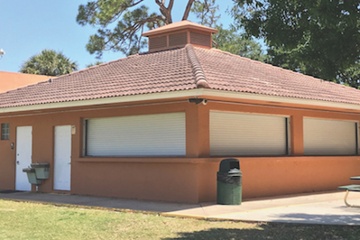