Next Fall, by Gregory Nauffts

The Outré Theatre Company will be coming to the Pompano Beach Cultural Center for their production of Gregory Naufft’s award-winning play Next Fall. The play was the winner of the 2010 Outer Critics Circle Award for Best New American Play, Next Fall is a said to be witty and provocative, taking a look at what sustains us, and what it is to love someone unconditionally.

“Nauffts has written a very funny, very powerful piece,” said Skye Whitcomb, Outré’s Artistic Director and the director of the production. “While the characters often exchange witty repartee, they also share their joy and sadness in a way that is very real and truthful. They struggle with identity, with belief in both the tangible and the intangible, and with their relationships with themselves and others. At its core, it’s a very beautiful, very moving love story.”

The New York Times said the play is, “Smart, sensitive, immensely appealing and utterly contemporary”.  The Entertainment Weekly review called it “a daring new drama”.  And,  the Associated Press found it to be “compassionate, laugh-filled and enormously entertaining.”

Charlie Alguera (Luke) most recently seen with Measure For Measure/Infinite Abyss in Next To Normal. He is excited to continue working in local theatre with Outré. Alguera is a  recent graduate of Palm Beach State College, and plans to transfer to a four-year university this fall.

Kat Gold (Holly) holds a BFA in Musical Theatre from UWF. Among her recent credits include are Outré’s production of Hedwig and The Angry Inch, The Pirates of Penzance (The Wick), and Smokey Joe’s Cafe (Broward Stage Door).  Gold received a 2017 Silver Palm Award and a Carbonell Award Nomination for Best Supporting Actress in a Musical for her performance ias Sarraghina in Nine the Musical,

Zac Gowdie (Brandon) recent graduated from the University of Florida. Among his previous credits are The Colored Museum (Miss Roj) and The Country Wife (Mr. Sparkish). This is Gowdie’s first performance with Outré Theatre Company and he says he is extremely excited to be a part of the Next Fall cast.

New Jersey native Siobhan Nolan (Arlene) has been performing  virtually her whole life. She was co-producer of Stardust Mysteries dinner theater in Atlantic City and recently has been seen at Infinite Abyss in Wilton Manors.

Kevin Reilley (Butch) is a resident of South Florida for more than two decades.  He has appeared on stages from Palm Beach to Miami, including Gablestage and won the Curtain Up Award and received multiple Carbonell Awards nominations.

For more news about Cultural Events in Pompano Beach, go to our events listings and read Pompano! Magazine.

Father’s Day Events in and around Pompano Beach & Deerfield Beach 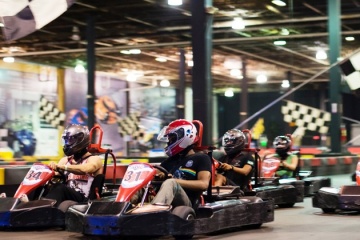