POMPANO BEACH NEW RESTAURANT: Another  restaurant is being planned for Old Town, an area the Pompano Beach Community Redevelopment Agency (CRA) is developing as an arts and entertainment district.

The restaurant, called Papamigos, is slated to occupy a currently vacant space at 44 NE First Street, as well as an adjacent patio area overlooking the Civic Plaza fountain.

Two separate lease agreements between the CRA and the restaurant operator – one for the building, and one for the outdoor space – are scheduled to go before the CRA Board for approval in February. If approved, the restaurant could open by the end of 2020.

Papamigos (“friends of Papa”) is a concept of Troy Ganter and his family, the owners of Papa’s Raw Bar and Papa’s Fish House (formerly called Papa Hughie’s Seafood World) in Lighthouse Point.

The menu includes items such as a Nacho Mama’s Roll, which is a shrimp tempura sushi roll topped with homemade queso.

The restaurant will also feature sushi tacos served on deep-fried nori sheets, and regular tacos made with tortillas from local Mexican cantinas. Local fresh fish will be used for the sushi.

Ganter’s family has a nationally trademarked motto: “Eat, Drink and Be Local.” The concept is “to create synergy among locals and local businesses, to pool resources and work together.”

In keeping with that philosophy, Papamigos will have a strong emphasis on keeping everything as local as possible, said Ganter.

The restaurant’s décor will include artwork painted by several local artists, including Dennis Friel, who did the marine-inspired murals on the Atlantic Boulevard Bridge. Friel will paint an outside mural on the patio side, and a large mural behind the sushi bar.

There will be live entertainment from local musicians in a variety of genres, including reggae, Cuban roots, soul and funk.

Ganter anticipates the cost to build out the interior space, as well as the patio area, will be over $1 million. He hopes to have the leases for the property signed in February, to begin construction in March and to open the restaurant in late fall 2020.

Other new establishments are being planned for Old Town, including a hip “Southern comfort” restaurant concept, named Wood & Wire, that will occupy the building at 165 NE First Avenue. Sweets and More, a dessert catering shop, just opened at 122 N. Flagler Ave., and a coffee house, called Shack In Back, is slated to open in the same space later this year. In addition, the ground floor of the historic Bank of Pompano building at 61 NE First Street is being turned into a restaurant with outdoor dining. There are also plans to convert the 1920s medical office of Dr. George McClellan – Pompano Beach’s first doctor – into a café or wine bar.

At the center of this up and coming area, the CRA is in the process of creating a new pedestrian plaza, called “The Backyard.”

“We really believe in the area,” said Ganter. “Timing is everything, and we believe that now is the time to make it happen, and we’re really excited. Pompano is booming.”

“We pop up and we serve food, we create customer awareness and we gather feedback,” he said. “It’s a great way to do market research.” 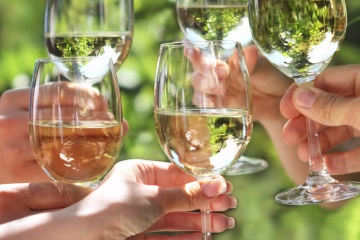