The Planning and Zoning Board last month approved an application submitted by the developer for a Land Use Plan Amendment (LUPA), which, if approved by the City Commission and the County, will allow the developer to build a total of 4,100 multi-family residential units and to adjust the square footage of nonresidential uses.

The property is being redeveloped by The Cordish Companies in partnership with Eldorado Resorts, which purchased Isle of Capri Casinos and its 13 resorts (including Isle Casino in Pompano Beach) in 2016. The Cordish Companies, a Baltimore-based firm, develops, owns and operates Live! entertainment destinations across the country.

The 232-acre project site, located on the southeast corner of the intersection of Powerline Road and SW 3rd Street (Race Track Road), currently contains a harness racing track and grandstand (which will be razed), 45,000 square feet of casino, and 112,000 square feet of commercial space.

The project “is on quite a fast track,” said Jean Dolan of the city’s Development Services Department, and the land use change is the first step in the approval process.

The land use plan amendment would modify the entitlements of the existing “Regional Activity Center” land use designation by adding another 2,800 multi-family residential units to the 1,300 multi-family residential units currently permitted, and by allowing more office space. It would reduce commercial recreation use, as well as commercial use, which is primarily retail space.

The development of the proposed mixed-use project is planned to be in three phases. The first phase, expected to be completed in 2022, consists of 679 residential units; 102,567 square feet of casino; 188,479 square feet of commercial space; an 18-screen movie theater; a 225-room hotel; a 300-seat jai alai fronton; and a 36,750-sqare-foot Topgolf driving range.

During a public meeting held in April at the Herb Skolnick Community Center in Palm Aire, the residential community located just west of the project site, David Cordish, Chairman of The Cordish Companies, said that a groundbreaking is expected in the summer of 2020.

Concurrent with its request for a land use change, the developer has submitted a rezoning application that is scheduled to go before the Planning and Zoning Board on Aug. 28.

If the rezoning of the project site is approved, it would create a Planned Commercial Development (PCD) district, providing more development flexibility than the current zoning, which allows for commercial recreation uses, commercial and industrial uses, but not residential.

“You’re going to see a lot of action on this one in a relatively short time frame,” said Dolan.

Debbie Orshefsky, the attorney representing the developer, said the vision is to transform the site into an innovative, contemporary “live, work, play environment.”

The project will be surrounded on all sides with multi-purpose landscape buffers that will provide for drainage, landscaping, nature, walking and bike trails. A “crystal lake,” suitable for swimming, will be centrally located within the development.

Orshefsky said the South Florida Regional Transportation Authority recently approved a resolution supporting a potential Tri-Rail station along the CSX Railroad just east of the site, and the developer, together with municipal and governmental partners, would need to find funding to build it.

During the public input portion of the meeting, some residents expressed concerns about the project, including traffic congestion, lack of community outreach, disruption to the surrounding neighborhoods during the lengthy construction period, and whether or not the project will include affordable housing.

A resident of the Cypress Bend community, which is just south of the project site, said that at the public meeting held in April, The Cordish Companies said they would hold small meetings to keep residents updated, but that hasn’t happened.

“Where is the information coming back to our neighborhood?” asked the woman. “This is the first I’ve heard that they’re changing the project around.”

Another resident of Cypress Bend said: “If they do go ahead with this construction, I feel that we need some sort of sound barrier wall to absorb some of this noise. Imagine listening to construction for 10 years straight.”

A member of the audience who was there on behalf of Florida Future Labor Leaders, and “my brothers and sisters who live and work in this city,” said: “Our primary goal is to ensure that working-class people are not excluded from the conversation as it pertains to responsible growth. We are asking for more opportunities to provide input on what will be one of the largest developments of the next decade.”

Addressing the traffic issue, Orshefsky said that from a land use planning standpoint, the proposed development creates a reduction of 1,668 PM peak hour trips per day over what is currently permitted for the site.

She added that a 600-page traffic analysis is under review, and will be presented to the Planning and Zoning Board on Aug. 28 as part of the PCD zoning request.

Orshefsky said the principal amount of residential development is planned for the south side of the site, adjacent to Cypress Bend, so there will be compatibility, as well as a special minimum buffer area.

In terms of economic development, the project will create “thousands and thousands of not just construction jobs, but permanent jobs, at all income levels,” said Orshefsky, and the developer is committed to working with the local community to hold job fairs.

According to Orshefsky, the developer will, in all likelihood, designate 15 percent of the residential units within the development as affordable housing, rather than pay a fee to opt out of this requirement.

Orshefsky said public outreach meetings will be set up before the August zoning hearing, and that the development team had been waiting to hold them until there was a set of “more specific” plans for the Isle Casino redevelopment. 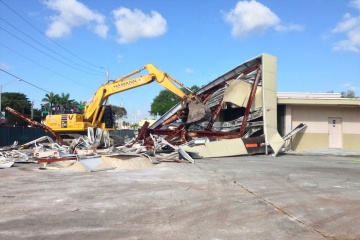