A meeting held last night to discuss the redevelopment plans for the 223-acre site of the Isle Casino Racing Pompano Park drew an estimated 350 people to the Herb Skolnick Community Center, with many having to stand along the back and side walls of the auditorium. The Isle Casino site, owned by Eldorado Resorts, will be redeveloped in partnership with the Cordish Companies, a Baltimore-based real estate development firm.

“This is the largest crowd I think I’ve ever seen gathered in Palm Aire,” said Pompano Beach Vice Mayor Barry Moss, who represents District 5, and hosted the meeting. Palm Aire is the residential development located across the street from the Isle Casino site.

David Cordish, Chairman of The Cordish Companies said: “To have this kind of turnout is very unusual, and a tremendous compliment to all of you. It shows you care about your community.”

Cordish presented a preliminary overview of the Isle Casino project, which is slated for groundbreaking in the summer of 2020. Cordish said it will be developed in stages, with the buildout taking at least 10 years. In addition to new development going up on the site, the existing casino will be renovated and expanded.

The center piece of the overall project is a “crystal lake,” surrounded by a park, which will be open to the public. It is intended to become the “town center” of the project. Cordish explained that the lake will be lined with a plastic-type coating and have a system that recycles the water and keeps it “crystal clear” and suitable for swimming.

There will also be standard retail, which could include a multiplex movie theater and food markets. A corporate office campus and a residential and hotel component are also planned.

The general plans call for a live entertainment district, or public plaza, that has a giant LED screen. The idea is for it to become a place where people gather to have “watch parties” for events such as the Super Bowl, the World Series or Miami Heat games. The plaza would be surrounded by restaurants and venues with live music performances.

“One of the things that I am positive we will do with this project is create thousands of jobs,” said Cordish. “Every project we’ve ever done has done that.”

Cordish said the project will generate not only construction jobs, but permanent jobs. One of the ways to create permanent jobs is to have a corporate office presence, which he said his firm will have no problem attracting with the corporate campus that will be built.

The firm will also “give priority and preference to local contractors.” And when it comes to filling up office space, local businesses will get priority, Cordish said.

The number of residential units the project will include is still uncertain. Cordish said he wants to see whatkind of input is provided by the public, and “what we learn as we get deeper into the market.”

During his PowerPoint presentation, Cordish also went over some of the projects The Cordish Companies has carried out in other cities, such as the Seminole Hard Rock Hotel & Casino in Hollywood, Florida and its sister project in Tampa. At the Hollywood location,

Cordish also highlighted the 5-star Charleston Place Hotel that his firm built in Charleston, South Carolina. He said the mixed-use hotel played an important role in transforming Charleston into the vibrant city it is today.

The Cordish Companies, family-owned for over 100 years, is the only development company in the United States to receive seven Urban Land Institute (ULI) Awards for Excellence. Each year, the ULI, a national nonprofit organization, gives the award to only a few developments from among all those that are built inthat year.

“You can’t just have a successful project or an attractive project,” said Cordish. “It has to be transformative. It has to bring a new meaning to a general area.”

He said that in the case of the Isle Casino development, the goal is to create a town center, a meeting place and a walkable district that will be transformative.

Cordish said that plans are in the works to build a transit station on the railroad tracks that are directly behind where the corporate offices would be located. Shuttles would run back and forth between Palm Aire, which would be “a tremendous help” with connectivity.

Almost all the members of the consulting team that The Cordish Companies has assembled for the Isle Casino project “know the community,” and are from local firms, including Keith (engineering and design), Holland & Knight (law), and Kimley-Horn (traffic consulting).

Because the project site is so large, “you’d better have a good master plan,” said Cordish. “We brought in one of the best in the world to help us do that.”

While there was no question and answer period after Cordish presented the general project plans, he gave his email address (david@cordish.com) to the audience, telling them not to hesitate to use it, “if you have an idea, if you have a thought…and we’ll reply.”

Cordish also said he intends to have meetings with smaller community groups as the project moves forward, where there can be “real input back and forth,” to learn of concerns and get suggestions.

“This is a march of a thousand miles,” he said. “It began with the first step, which was tonight.”

This story was updated at 5pm on 5/2 to more accurately reflect the Cordish-Hard Rock relationship. 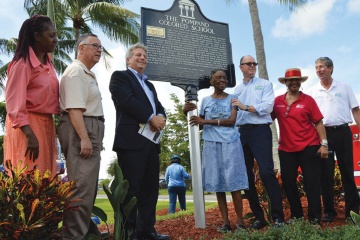