POMPANO BEACH ISLE CASINO REDEVELOPMENT: Plans to build an e-commerce distribution center and an entertainment complex on the Isle Casino Racing Pompano Park site have been submitted to the City of Pompano Beach and are currently under review.

Both projects are part of the redevelopment of the Isle Casino property into Live! Resorts Pompano – an entertainment, hotel, dining, retail, residential and office hub. The Isle Casino property, located on the southeast corner of Powerline Road and SW 3rd Street (Racetrack Road), is being redeveloped by The Cordish Companies, which has already constructed 12 Live! facilities in cities throughout the United States, including Atlanta, Baltimore, St. Louis and Philadelphia.

Indianapolis-based Scannell Properties, also known as SPA Properties, LLC, has submitted an application to the City seeking site plan approval for the e-commerce distribution center, which would occupy roughly 90 acres on the east side of the 232-gross acre Isle Casino site.

The e-commerce facility wasn’t in the original plans for the Live! Resorts Pompano project, but last year the City Commission approved adding it at the request of The Cordish Companies.

The revised plans were a result of the COVID-19 pandemic, according to David Cordish, Chairman of the Baltimore-based Cordish Companies. Cordish told the Commission that with more people working remotely, less office space is “much more fitting,” and the e-commerce facility will “jump start” the Live! Resorts Pompano project in a difficult economic environment.

Cordish said the e-commerce distribution and logistics firm is “world-renowned,” but the name currently cannot be disclosed due to a non-disclosure agreement.

Cordish said everything else promised in the original plans for the Live! Resorts Pompano project will still be delivered, including over 4,000 residential units, neighborhood retail, an entertainment district, a maximum of 950 hotel rooms, an expanded casino and a lake surrounded by a park.

Many residents in the Cypress Bend community south of the project site, and in the Palm Aire neighborhood to the west, were against adding the industrial use to the project, mainly due to concerns over the truck traffic that would be generated by the e-commerce distribution center.

According to the site plan application, approximately 170 trailer trucks (18 wheelers) and 75 box trucks would access the sortation facility daily to drop off and pick up sorted packages. It is anticipated approximately 21 line-haul trucks will deliver packages to the delivery station each day, primarily from 10pm to 8am. The proposed delivery station is a one-story building with a height of 46.5 feet.

Trucks for both the delivery station and sortation facility will be required to enter and exit the site through a restricted access point, using Racetrack Road from the east. Truck movement will be prohibited west on Racetrack Road and through the property onto Powerline Road.

To protect the neighbors to the south of the e-commerce facility, the plans include a large buffer area, a landscaped berm and a sound barrier wall.

The e-commerce distribution center would include five miles of underground conduits that would be used to create charging stations for electric vehicles. The charging stations are anticipated to be fully operational two years after the opening.

The sortation facility is expected to create about 1,000 jobs, and the delivery station about 140 jobs, which is a primary reason the City Commission was in favor of adding the e-commerce component to the Live! Resorts Pompano project. The employer would pay at least $15 per hour in wages.

Keith, a Pompano-based planning services firm, has submitted a site plan application to the City for a Live! Venue, which consists of a two-story “Live! Building” with dining and entertainment spaces; a one-story retail building; four retail pavilions; and an event lawn and stage for outdoor entertainment in a pedestrian-friendly atmosphere.

The 32,800-square-foot Live! building would occupy a currently vacant parcel just northwest of the existing casino. Similar to Live! venues in other cities, the building would include a two-level sports-themed concept, called Sports & Social, which blends dining, sports viewing and social games. Sports & Social locations contain experiences such as golf simulators, ping pong, skee-ball, shuffleboard, air hockey and other social games. They also feature a two-story LED screen to give the feeling of being in a stadium or arena.

The Live! building in Pompano would also include a country bar, called PBR, which gets its name from Professional Bull Riders, a premier bull riding organization. The PBR bar includes a space for a mechanical bull. Professional Bull Riders has partnered with The Cordish Companies to develop a number of PBR bars around the country over the past decade, including the flagship at the Live! entertainment complex in Arlington, Texas.

The Live! building would also include a tavern on the ground level and several outdoor covered areas, including a beer garden.

The proposed 3,781-square-foot event lawn, just south of the Live! building, features a permanent stage to host informal performances, concerts and community events, as well as an accessory stage. Directly south of the event lawn is the proposed 20,479-square-foot one-story retail building.

According to the plans, tenants in the four retail pavilions include a Starbucks; an Apple store; Lockhart Smokehouse (a popular Texas-based barbecue restaurant); and an Aca Joe apparel store featuring cotton clothing inspired by the beach lifestyle of Acapulco.

What Are All-on-4 Dental Implants? 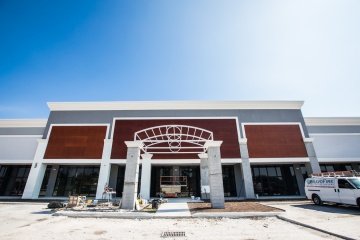