We were going through our archives the other day and found a bunch of pictures of Pompano Beach history taken throughout the 20th century. We thought you would find them interesting too.  We did our best to find out the history of the pictures and locations, but if you know better than we do, please e-mail me at: Jeff@PointPubs.com or post on our Facebook page.

So what did we come up with?  Here’s a summary of the pictures, which you will find above and below.

The high rise condos didn’t really start to take over A1A until the late 1960s.  Prior to that, the road was lined with small tacky motels that we would now call “boutique hotels” and lots of empty land.  If you were travelling north on A1A, just past Atlantic Blvd.  you would have found dozens of small cottages.  Called the Kester Cottages, they were built primarily in the 1930’s by local resident and prominent business leader William Kester.

According to the Pompano Beach Historical Society website, they “were mostly 25-by-35-foot single story dwellings on the beachside, one, two and three bedroom models. They were all painted white and each featured shutters with cutouts from the four suits in a deck of playing cards. Houses cost $950 and were rented out for $29 a month.” There were between 100 and 150 cottages built.  Most were on the beach but some were built in the Old Pompano area as well as in Deerfield Beach.  Only a few remain today.  The home of the historical society is in a Kester Cottage (see below for more info) and there are a few on NE 1st Street that are still inhabited by real people.  The cottages along the beach are long gone.

The photo is from the vantage point of just south of East Atlantic Blvd., looking north up A1A.  I’m guessing that Pompano Beach Blvd. (the small road that is east of A1A) did not yet exist.

Today, as best as we can tell, the Kester Cottage area today overlaps with portions of the Plaza at Oceanside, Ocean Monarch and Sea Monarch condos, the Fire Station, the library and Wells Fargo buildings and possibly go as far north to what is now the Parliament House and/or the Bermuda House condos.

Back in the day Howard Johnson’s Motels, Hotels and restaurants were everywhere along the east coast.  Locally there were several in Fort Lauderdale, one in Lauderdale-by-the-Sea, and one in Deerfield Beach (now the Wyndham). The Pompano Beach hotel was located at the corner of East Atlantic Blvd. and N. Pompano Beach Blvd., right across the street from the beach.  It was 9 stories tall with 103 rooms, most with views of the Atlantic Ocean. The hotel opened in 1971 and closed in the early 2000s.  Today it is leased by the city from a private owner and is being used as a giant parking lot.  That arrangement is not expected to last for more than a few more years.

Storyland was a kids oriented amusement park that opened for business in 1955.  It was advertised as a “million dollar fantasyland, north of Fort Lauderdale.” according to a promotional brochure for the attraction.  One of the few fun things to do in this part of the county, the actual address was 891 Federal Hwy. in Pompano Beach.  That puts it somewhere around where the Joey Accardi car dealerships are located today on the west side of South Federal Highway.

Although it looked like a lot of fun, the venue didn’t last long.  It first closed in 1961 and was torn down in 1964 after sustaining damage from Hurricane Cleo.  There were several other Storylands built along the east coast in the late 50s and early 60s.

Doc’s was a general store and restaurant of sorts that specialized in bar-b-que and other food items.  According to FloridaMemory.com, the store was owned by “Doc” Garner with plenty of help from his wife and children.  The multi-purpose shop was located at 950 W. Hammondville Road. It served residents of the west side of town in then segregated Pompano Beach.

Sambo’s Restaurant was a big chain that started in California in 1957.  By the 60’s the restaurants  had spread throughout most of the United States, with the exception of the northeast U.S.  There were at least 4 Sambo’s in Broward County.  The Pompano Beach Sambo’s was located at 2250 N Federal Hwy.  Pretty sure that is the site today of Chic Fil A.  The Sambo’s in Deerfield Beach was at 699 S Federal Hwy until the early 1980s.  The building was the home of Marlee’s Diner until it closed last year.

Of course the reason Sambo’s so quickly fell out of favor was the fact that their name had serious racist connotations.  If you don’t know why, click here to be better informed. None the less, many locals have fond memories of the food at Sambo’s.  We couldn’t find a photo of the actual Pompano Beach Sambo’s but most of them looked pretty much the same.  Our photo comes from Tim Putz Presents Sambo’s Photographs

MYSTERY SIGN:  This Welcome to Pompano Beach sign would seem likely to have been situated on Federal Highway.  We’re guesstimating it was up in the 1950s or possibly the 40s.    If the sign is guiding people to the Hillsboro Inlet fishing boats, then it would have been positioned for people heading north on US1.  Since the 14th Street Causeway bridge wasn’t built until 1967, it is likely that the “2nd light right” was referring to Atlantic Blvd.  So, the sign was probably in south Pompano Beach, maybe somewhere McNab Road.  DO YOU KNOW THE STORY OF THE SIGN?  If you do, please tell us more.  E-mail me at: Jeff@PointPubs.com or post on our Facebook page.

The center is located at 217 NE 4th Ave, Pompano Beach.  Call them at (954) 782-3015.
There’s also a Facebook page:  Remembering “The Old” Pompano/Deerfield/LHP which has lots of memories, especially from people who grew up here in Pompano Beach.  Definitely worth checking out.
If we get strong reaction to this story, we will run a follow-up in the coming weeks.
For more fun things to do in Pompano Beach and all of the season’s biggest events read Pompano! magazine and search our website. 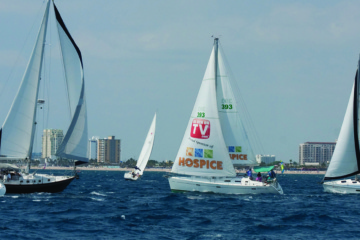