Plans to add a catering hall and event facility operated by New York-based Lovin’ Oven Catering to the Pompano Beach Fishing Village have been cancelled, according to city officials. The proposed facility would have been a place to hold weddings, private parties, corporate meetings and other events.

Although no official reason for the change in plans was given by the City, Lovin’ Oven or the developer, members of the community, as well as the East CRA Advisory Committee, had expressed concern about the height of the proposed building, which was higher than they had anticipated.

Last year, Lovin’ Oven Catering, which operates high-end properties in New York and South Carolina, signed a lease for a parcel located on the southeast corner of the Pompano Beach Fishing Village site, just west of the pier.

The Pompano Beach Fishing Village development project includes the Pompano Beach House and Oceanic restaurants, and the Pier Parking Garage. Still under construction are Lucky Fish Beach Bar and Grill, Alvin’s Island beach goods store, BurgerFi, Kilwins, Cannoli Kitchen and a dual-branded Hilton hotel. The event space was to occupy the last parcel in the Fishing Village that has yet to be filled.

Tim Hernandez, a partner of Pompano Pier Associates, the developer of the Pompano Beach Fishing Village, believed the Lovin’ Oven venue was going to be “a game changer for Pompano Beach.”

He anticipated the facility would have a positive economic impact on the city by drawing people to Pompano Beach who might otherwise have held their functions in West Palm Beach, Boca Raton, Fort Lauderdale or Miami.

“This will go down as one of the biggest missed opportunities in Pompano’s history,” said Hernandez.

City Commissioner Andrea McGee of District 1, where the Fishing Village is located, disagreed. McGee said she “wasn’t of the mindset that the event space was the best use for the parcel.”

“We’ve put so much energy into getting the Fishing Village right, that it needs to fit with the rest of the concept,” she said. “We’re creating this very pedestrian-friendly, accessible beach area.”

McGee said an event facility wouldn’t be a building for the general public to access, only those attending an event being hosted there.

McGee would like to see the parcel used for “an interactive restaurant and/or retail space to provide more entertainment opportunities for residents and visitors coming to our beach.”

“Pompano could definitely use more ballroom-style event space, but I don’t think this particular parcel is the right location for it,” she said.

McGee said her constituents had expressed concern to her regarding the use of the parcel for an event space or catering hall, the height of the proposed building, traffic and parking. Those concerns were also voiced at public city meetings, particularly by residents who live in the vicinity of the Fishing Village.

The building would have been lower than the five-story Hilton hotel and the Pier Parking Garage, but higher than Oceanic, the Beach House and the rest of the buildings on the site, which stand at about 35 and 37 feet.

Although the current zoning of the Fishing Village site allows for buildings with a maximum height of 58 feet, the expectation was that the facility was going to be on a scale in keeping with the lower buildings on the site.

Concern was also raised that the building would block most of the ocean views on the east side of the Hilton hotel.

According to city officials, the development agreement for the Fishing Village site only allows a restaurant and retail use on the parcel that Lovin’ Oven had intended to lease, not an event venue.

Although the development agreement currently only allows a restaurant and retail use on the vacant parcel, a city official said “the City is open to other compatible uses.” Hernandez did not provide any options under consideration for the parcel.

Earlier this year, the city’s Economic Development Council said it was in favor of the parcel being used for an event space. One reason was it would generate less traffic than a restaurant because there would be less turnover.

McGee said that while a catering facility might have less traffic throughout the day, cars would be arriving and leaving the event space all at once, making it much more congested at those times.

Several changes had been made to the building design based on feedback from residents. The loading dock, originally planned to face the Ocean Monarch condominium to the south, was moved to the west side of the building. In addition, the building itself was moved further west, so a circular driveway could be added in front of the entrance facing Pompano Beach Boulevard.

The project was scheduled to go to the Architectural Appearance Committee and the Planning and Zoning Board in April, but in March, Lovin’ Oven made the decision not to pursue its plans for the event space.

“No one had bad intentions,” said Michael Scollan, Vice President of Lovin’ Oven. “It was due to a confluence of factors. Sometimes things work out, and sometimes they don’t. There are no hard feelings.” 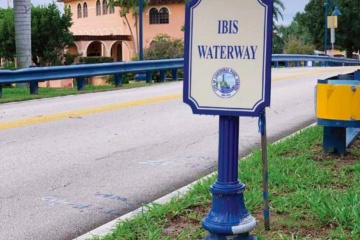