The owners of the Beach House restaurant are behind the project.

Last November, Brimstone Restaurant Group signed a lease for Parcel R3 with PPA, LLC, an affiliate of Pompano Pier Associates, the developer of the Pompano Beach Fishing Village. The restaurant plans are currently going through the City’s review process.

The restaurant would be in a one-story building with roughly 6,500 square feet of interior space (200 seats) and a 2,500-square-foot patio (about 150 seats). There would be two full bars – one inside, one outside. The outside would have a small fireplace. A 40-seat private dining room would be used for parties and other events, or for normal business if no private function is planned.

The restaurant, which has not yet been officially named, would be open for breakfast, lunch and dinner seven days a week.

What’s on the Menu?

“It’s not going to be a traditional Mexican restaurant,” said Andy Fox, operating partner of Brimstone Restaurant Group. “It’s going to be a scratch-made kitchen serving a lot of fresh seafood with a Mexican flair.”

“We will make everything in-house,” said Fox. “We’ll cut our own fish, and our own steaks.”

The goal is to have about 10 beers and seven wines on tap. Margaritas would also be on tap, and the sour mix would be made with freshly-squeezed juices.

Breakfast options include huevos rancheros and eggs Benedict with a Mexican twist, “but you’ll also be able to get bacon and eggs with toast,” said Fox.

“There’s always a lot of beach traffic early in the morning, so we knew we wanted to do some breakfast there,” said Fox.

The plan is to have garage doors – like the ones at the Beach House – on the east side of the restaurant, facing the beach, so in nice weather the interior space can be made open-air. The patio would be at the south end of the restaurant, with a straight view to the ocean.

Parking for the restaurant would be in the Pier Parking Garage.

According to current plans, the height of the restaurant building would be 23 feet 8 inches.

New York-based Lovin’ Oven Catering had plans to build a catering hall and event facility on Parcel R3, but those plans were cancelled last year. Members of the community had expressed concern about traffic, parking and the height of the proposed building, which was higher than they had anticipated – 41 feet 10 inches to the roof deck, and 55 feet to the top of the stairwell and elevator tower.

“We want to be a good neighbor,” said Fox. “We’ve gone out of our way to make sure we don’t block any condo or hotel views.”

Parcel R3 is the last parcel in the Fishing Village that has yet to be filled.

“We were interested in that spot from the beginning,” said Fox. “Once it became available again after the deal for the catering facility fell through, we jumped on it.”

NEW COVID-19 VACCINATION SITE IS SET UP IN POMPANO BEACH, BUT AWAITS VACCINES 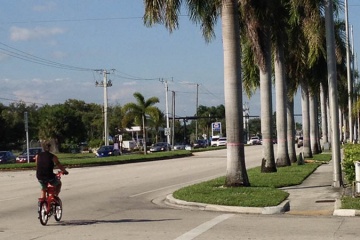