The CRA is proposing to move the 700-square-foot structure from its current location at the northeast corner of NE First Avenue and NE Second Street, to the northwest corner, which is directly across the street.

“This is about preserving a historic building, our cultural heritage, and adding one more charming piece to Old Town,” said a member of the project team.

“This is an incredible way to honor his service to this community as a medical professional,” said Jerry Bowman, chair of the Pompano Beach Historic Preservation Board.

“In the era of segregation, he had no color lines and served anybody who came through his door.”

Pompano Beach’s first doctor, McClellan came to Pompano in 1921 from Wellborn, a town in northwest Florida. His medical office was built sometime between 1924 and 1926. He practiced there until he died in 1958, when he was in his late 60s.

His house was built right next door, and he lived there with his wife Novice, and their daughter and three sons. His wife served as his nurse and ran the office.

In addition to his family practice, McClellan also opened a pharmacy at 126 N. Flagler Avenue, which was run by a druggist. The tile entryway of the building still says “McClellan Drugs.” McClellan also did some farming on a small farm that he owned.

“He was a country doctor,” said Bebe Delk, McClellan’s 91-year-old niece, who lives in Pompano Beach. “He did everything from deliver babies to set a broken arm, or sew you up if you got cut.”

Delk is one of the many babies that McClellan delivered in Pompano Beach. McClellan was president of the Broward County Medical Association, and played a role in establishing Broward Medical Center and Holy Cross Hospital.

His office building, made of reinforced concrete and steel, survived the 1926 hurricane and sheltered six local families, including the McClellans, who deemed it to be safer than their wooden house.

After the doctor’s office was closed, the building housed several businesses, most recently a beauty salon and a massage parlor. The building was included in the 2013 Pompano Beach Historic Sites Survey. McClellan’s house was demolished earlier this year because it was beyond repair.

The relocation project is expected to go before the CRA Board in December for consideration. If approved, the plan is to issue bids in early 2020 for a moving company, and for a firm to design and carry out renovations to the building. A bid for an operator to lease the building is expected to be issued at the end of 2020, with an anticipated opening date of end 2021.

The estimated cost for the CRA to relocate and renovate the office building is approximately $400,000, which Includes a 30 percent contingency.

The proposed site for the office relocation is a public parking lot leased by the CRA. Although two or three parking spaces will be lost, the lot will be restriped to gain them back.

There will be a small patio in front of the office building for outdoor seating. The building will be across the street from a new a pedestrian and dining plaza, called “The Backyard,” that the CRA is in the process of creating.

Other new establishments are being planned for Old Town, including a hip “Southern comfort” restaurant concept, named Wood & Wire, that will occupy the building at 165 NE First Avenue. In addition, a vacant space at 122 N. Flagler Ave. will soon be home to a dual-concept sweets shop and coffee house, and the ground floor of the historic Bank of Pompano building at 61 NE First Street is being turned into a restaurant with outdoor dining.

Wine Gifts for the Holidays 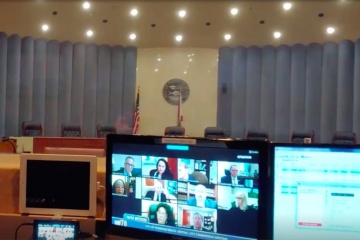