On Monday, Dec. 11, 2017, Pompano Beach City Commissioners and company officials from Currie Sowards Aguila Architects [CSA Architects] and Burkhardt Construction, convened in front of a public crowd at The Foundry restaurant to host a festive groundbreaking ceremony announcing plans for the new Atlantic Boulevard Bridge. Together they unveiled their creative vision for the bridge, which they hoped could become an iconic gateway leading to the oceanside area of Pompano Beach. The plans included four grand sails on the four corners of the bridge (mirroring those on the new pier parking garage), marine-themed murals, computerized uplighting, land lighting and most ambitious, a pedestrian esplanade under the bridge to connect hip restaurants on the north and south sides of the bridge.

Horacio Danovich, the Critical Infrastructure Protection [CIP] and Innovation District Director who has been leading the charge on the project since the beginning, said he estimates the decorative sails by CSA Architects, and the splashy marine-themed artwork by local artist Dennis Friel, will be installed in March, while the bridge construction will be done in late May or early June.

“This bridge is a symbolic ‘welcome’ to all who visit our beachfront,” said Danovich.

The CRA made $1.5 million available to make the first phase of improvements to the bridge, followed by an additional $3.5 million to complete the project.

CSA Architect partner Jess Sowards said he believes the bridge will help shape the city in an important way.

“Their [the City and CRA Advisory Committee’s] understanding that parking garages and bridges are symbols of the city, not just functioning structures, has set the style for the type of businesses, hotels and developments that now want to be part of this growing community,” Sowards said.

Meet The Artist of “Atlantic Harmony”

ennis Friel is the creative mastermind, skilled painter and digital madman behind the marine themed murals to be installed in March on the facades of the new and improved Atlantic Boulevard Bridge. He named the project “Atlantic Harmony” to represent the deeper meaning he hopes to convey through the murals. A bridge, he said, is a harmonious idea; It creates connection and builds community between two places, between diverse people. Harmony is also found in the Atlantic Ocean where a rich and abundant marine ecosystem exists, each diverse species of fish, coral and marine life uniquely contributing to a wondrous, self-balancing system.

The artwork includes six large panels — some as big as 70 feet by 10 feet — plus some corner details. Combined the panels feature approximately 50 different species of marine life, blended throughout an ever-changing underwater and oceanside landscape. The underwater parts are playful, ethereal and evoke a sense of peering into the magic below the sea. A few Pompano Beach landmarks are spotted throughout the murals, including the Hillsboro Lighthouse.

The largest, signature sections of the work, which will be featured on the north side of the bridge, are lively paintings of majestic sailfish thrashing their bodies and plunging through crystal water. Those two murals were entirely painted by hand on canvas in Friel’s studio before being digitized and printed as wrap on substrate, which will be attached to the bridge.

The four other panels are an amalgamation of painting, digital artwork and illustrative design. Friel’s process for creating those multi-media pieces was impressive. He painted each individual species of fish by hand, incorporating every characteristic detail — from the way the light hits the eye of a king mackeral, to the anatomy of a wahoo fin, to the way the grey cascades into the yellow of a sergeant major. Then, he scanned or photographed each painting to attain a high-resolution digital image. He then manipulated his paintings and arranged them like puzzle pieces onto a large digital canvas, which he shaped and sized using the architectural drawings of the bridge. Masterfully using Photoshop, he digitally created the environments around the fish, blending each element together into a cohesive scene.

The complicated process required Friel to think carefully through a thousand details — the shape of each panel, the various structural elements of the bridge that might alter one’s vision of the painting from various viewpoints, how each panel works together and where best to place each marine species authentically. In addition, the extremely large file sizes for such a project were painfully slow, so strategizing when and how to make changes to the work was an art in and of itself.

While Friel has designed countless boat wraps and some small-scale public art projects, “Atlantic Harmony” is the largest project in scale he has ever tackled, and the most personal. He grew up in Pompano Beach, went to Cardinal Gibbons High School, spent his childhood vacations snorkeling in the Keys, his teens and 20s scuba diving and his entire life deep sea, offshore and inshore fishing. Friel said the “Atlantic Harmony” project is close to his heart, which was both beneficial, and burdensome to his process.

“One of the biggest challenges I’d say was dealing with myself,” he said. “What I mean by that is this is a really important piece for me; I want it to be my best piece ever. Just trying to get past that mental block can really bog you down. It helps me sometimes to go back in my head and say, ‘Remember when you were a kid and you just drew for fun in class?’ Sometimes you just gotta trick yourself into relaxing and getting creative. That’s when the best work comes.”

“For the most part they are all original illustrations. I draw them all from scratch,” he said. “It comes from in me. Occasionally I will look at a photograph for a reference of an eye, fin or specific colorization, but then I add my own style… I create all my own unique textures and unique underwater scenes and coral reefs.”

Painting underwater scenes is nothing new to Friel, who has been creating pelagic artwork since his youth. By his late teens, his work was already hung in local art galleries and featured at the then famed Wildfish Collection in Pompano Beach. It was through this early exposure that Friel gained his first clients, including the International Game Fish Association (IGFA), the Broward Everglades Research Foundation, Mote Marine Laboratory, the Southern Kingfish Association and Vision Street Wear.

Post high school, Friel attended the Ringling School of Art and Design in Sarasota, FL to study illustration, followed by a short stint at The Art Institute of Fort Lauderdale where digital design was being taught
in its infancy.

His first job after college married his passion for creative design to his second love: music. He became a designer for the world’s largest music distribution business, Alliance Entertainment, where he later became Creative Director. At Alliance, Friel led a team of designers to create artwork for major music labels and studios out of Los Angeles and New York, including Universal, Sony, Warner Brothers, EMI and Capitol, along with their associated bands and musicians. In his nearly two decades at Alliance, however, Friel never forgot, nor abandoned his love of designing pelagic artwork. He took on numerous side projects in the marine industry over the years, maintaining his network.

In 2013, Friel saw a glowing opportunity to pursue his dream of having his own, independent art studio. Together with his tireless, dedicated wife and fellow artist Liz, Friel opened Dennis Friel Art Studios, Inc., or DFAS for short. DFAS is very much ingrained in the South Florida marine community. The studio does most of its business designing logos, graphics, boat wraps, apparel and commissioned fine art for big names in the marine Industry including international fishing tournaments, custom boat builders, famous fish anglers, beach apparel companies and nonprofit organizations.

Some highlights from his tournament portfolio include being the featured artist for Jimmy Johnson National Billfish Championship, Custom Shootout and Abaco Blue Marlin Tournaments. He has completed projects and commissions for customers from Hawaii, Australia, Portugal, Dubai, the Philippines, Italy, UK, Costa Rica, Panama, Brazil, Morocco, Nicaragua, Belize and throughout the Bahamas and Caribbean.

Some of his proudest pro-bono efforts include work for the Coastal Conservation Association (CCA), The Billfish Foundation (TBF), Grouper Grapple benefitting Freedom Alliance, Boys and Girls Club of Miami and Surfers for Autism. Friel is a monthly illustrator for Marlin Magazine and in 2017 was named Billfish Artist of the Year by the Billfish Foundation, the largest international billfish tagging program.

DFAS has been growing its business rapidly. Within two years, the studio expanded to a larger space and is now on the verge of hiring additional staff, starting a retail apparel company and producing a podcast called “Connected By Water,” which will feature industry leaders and big thinkers with links to water related topics. Friel hopes his future endeavors can further foster connections between people passionate about the ocean, conservation and water — to promote, in the same spirit of his mural, “Atlantic Harmony.” 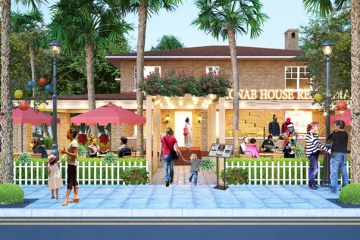