POMPANO BEACH A1A: Last week, the City moved forward in selecting a master developer to build a large-scale public parking garage, a hotel and a beach grocery store on the current site of the Oceanside parking lot. A Starbucks may also be built nearby, where the fountain now stands on The Plaza at Oceanside property.

The 3.2-acre City-owned site, located at 109 N. Ocean Boulevard (A1A), is just southwest of the Pompano Beach Fishing Village, east of the Sands Harbor Resort and Marina, and right next to the fire station.

E2L, based in Winter Park, was one of three firms short-listed in the first phase of the search for a qualified master developer, which was initiated in early 2019. The other two firms ultimately decided not to participate in the second phase.

In May, after reviewing E2L’s proposal, a selection evaluation committee voted unanimously to recommend that the City move forward with E2L.

While the Pompano Beach A1A area already has the Pier Parking Garage, the City is looking to build a second garage to meet increased parking needs generated by new development, including the Pompano Beach Fishing Village complex.

The project is a public-private partnership (P3) between the City and the master developer.

The proposed public sector components are the parking garage, retail space on the garage’s ground floor, and the creation of a through road connecting A1A to Riverside Drive that would be for pedestrian traffic and drainage.

The proposed private sector components are the hotel, grocery store and some type of office space.

Assistant City Manager Suzette Sibble, who oversees parking, budget and finance operations, said the private sector components still have to be finalized based on input from stakeholders, which includes the community, the City Commission and advisory boards such as the East CRA Advisory Committee.

The final size and configuration of the new parking garage will be determined by the nature and size of the private sector components.

“We plan to have all that stakeholder input in the negotiation phase,” said Sibble.

E2L’s conceptual design shows an 8-story tiered hotel built on top of the western portion of the garage. The overall height of the building, including the garage and hotel, would be 180 feet.

The hotel, as currently proposed, has 230 rooms, but “we haven’t decided yet what size hotel we want,” said Sibble.

A small-scale grocery store is envisioned for the retail shell of the parking garage – such as a Trader Joe’s, a 365 Market or Joseph’s Classic Market – “where people can pick up a few quick items without having to go over the bridge to Publix,” said Sibble.

“We feel that the community definitely wants a grocery store,” she said.

In E2L’s current conceptual design, the retail component would front A1A, and not Riverside Drive, which is on the western edge of the site.

The proposed parking garage would have four levels, and 1,084 parking spots, but it could end up being less, or a little more, said Sibble.

E2L’s preliminary design concept proposes decorative aluminum sails for the exterior of the garage. However, discussions will be ongoing as to any façade artistic elements and the related costs, said Sibble.

WHAT KIND OF PARKING GARAGE

Of the proposed 1,084 spaces, 868 spaces would be standard self-parking spaces, with an additional 216 spaces created by using stacker lifts, which allow one vehicle to be stacked above another in the same parking space. An alternative option combines standard spaces with an automated elevator system that would park and retrieve cars.

It has yet to be decided if the new parking garage will utilize either stacker lifts or an elevator system. It depends on what makes the most sense for the private uses that will ultimately be part of the project, said Sibble.

The City will lose the 279 surface parking spaces currently at the Oceanside parking lot site while the new garage is being built.

E2L has reached out to The Plaza at Oceanside to see if an arrangement can be made that would provide the City with some parking spaces in the condominium’s garage during the construction of the new garage.

POMPANO A1A PARKING GARAGE: WHEN THE PROJECT WILL BE COMPLETED

The first phase of the project would be the hotel, parking garage and the retail space on the ground floor of the garage. The second phase would be the grocery store and an office component.

The tentative schedule for both phases of the project to be completed is in 2023 or three years after a development agreement is executed.

HOW MUCH IT WILL COST & WHERE THE MONEY WILL COME FROM

Based on proposed conceptual designs, the cost of the private sector components would be $150 million and the garage without the stacker lifts or automated elevator system would be $37 million.

The developer will be responsible for financing the private sector components of the project, not the City.

E2L provided various options for financing the project, including refinancing the Pier Parking Garage to generate funds for the public sector portion, and long-term funding from bonds for the new garage.

E2L proposed a bond for $54 million, but Sibble emphasized that financing components still have to be worked out and there are no final figures at this point.

Part of the financing for the project would come from parking revenues. It would also come from ground lease revenues to the developer, similar to the Pompano Beach Fishing Village.

The proposal to refinance the City’s existing bond debt on the Pier Parking Garage will require further analysis of the market over the next months to see if there are any potential savings that could be used to offset the cost of the project’s public sector components.

If the City issued the bond, it would not require voter approval because it would not use ad valorem (property tax) revenues to secure the obligation, said Sibble.

E2L proposed a “podium” garage with a hotel on top due to the size constraints of the development site. While this configuration creates a smaller footprint, it is costlier than if the hotel were built beside the garage on its own foundation, said Sibble.

E2L has had discussions with The Plaza at Oceanside, just south of the development site, about possibly constructing a Starbucks where the condominium’s fountain currently stands, on the northwest corner of the A1A and East Atlantic Boulevard intersection. The concept is to have a coffee shop with a reading area.

E2L has already discussed the idea with Starbucks. The project would be a deal between the developer, The Plaza at Oceanside and Starbucks, not the City.

One of E2L’s goals is to enhance pedestrian traffic along Pompano Beach A1A to allow better visibility and access to whatever retail is finally approved for the ground floor of the new parking garage. It is anticipated this would also benefit retail space on the ground floor of The Plaza at Oceanside that isn’t active yet, as well as the proposed corner coffee shop.

Sibble said E2L is working with The Plaza at Oceanside to connect the two areas, “so there’s good pedestrian flow from their retail to our retail, and it’s a win-win.”

E2L’s proposal included a mobility hub that was outside the footprint of the Oceanside parking lot site.

The mobility hub would be a centralized location to allow for pickup and drop-off of people using ride-share services, such as the community bus, Uber, Lyft or electric golf carts.

“We’d like to have a mobility hub somewhere on the barrier island,” said Sibble. “So, either we’re going to rework it into the existing footprint of the site, or we’re going to figure something else out.”

The City would like to eventually have mobility hubs in various locations throughout the city, to connect east to west and west to east, and allow for less cars on the road. The idea is to provide connectivity between the beach, the Innovation District and the Isle Casino, as well as other destinations.

Sibble said she felt assured E2L would be able to dedicate the resources needed to get the Oceanside development project done, because they are winding down their Boynton Beach project, and the Oceanside project and Innovation District “will not really parallel each other.” 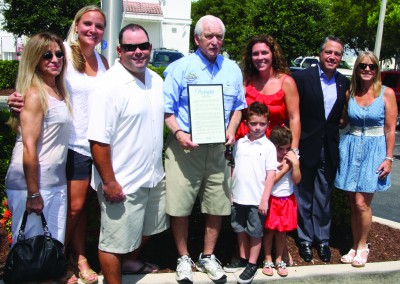