So where will the location be for the 2020 Pompano Beach Seafood Festival? We’ve talked to the players, city officials and the public and here is what we’ve learned.

If I were a betting man, I would say the Seafood Festival will be back in Community Park/Pompano Beach come next year.

The past weekend marked the first time in the 35 year history of the seafood festival that it was not held on or near the beach and the Pompano Beach Fishing Pier.  The move to Community Park and the Pompano Beach Amphitheatre was initially blamed on the heavy construction load happening around the pier, the Oceanic Restaurant and throughout the beach area overall.  Many officials, including Mayor Rex Hardin, indicated there was a good shot of the event returning to the beach once the construction situation settles down.

Turns out, the construction issues were probably more of an easy excuse and this year was most likely a try out to see if the new venue was feasible as a permanent home for the seafood festival.

The consensus of the decision makers is the new location is easier to set-up and maintain throughout the weekend, offers more adequate parking, a better concert experience and doesn’t create the physical constraints of the beach due to increased development and a limited amount of space available to  set up the famed Pompano Beach event.

City officials including City Manager Greg Harrison, members of the Pompano Beach Chamber of Commerce, folks at the Parks and Rec department and the event promoters all expressed support for the new location.

John Good, head of the event management company that produces the festivities says he was “very happy” with the way things went over the weekend.  He told us that “the size of the event,” combined with all of the new construction, made it “physically impossible to fit on the beach.”  Good believes once the public “gets past the ‘not on the beach’ factor  we should do well.”  He believes there are a lot of opportunities to expand the festival further and already has some ideas on how to make things “even better next year” including possible improvements in the site lay-out and the parking and traffic.

Troy Gantner and his family run Papa’s Raw Bar.  The Lighthouse Point restaurant is considered by most to be the premier food vendor at the Seafood Festival.  Gantner told one of our Pompano! Magazine correspondents the new venue was better with easier access for everyone involved and had a lot more potential than the original site.  He also acknowledged that sales had dropped from prior years.

The consensus among returning vendors was that sales were down, a fair number reporting decreases by as much as fifty percent.  There were also a lot of new vendors on site this year.  I talked with several of them and they all seemed satisfied with the money they were able to earn over the course of the weekend.

We’ve covered just about everyone, except for the people who attended the festival.  It is very hard to estimate crowd size, especially trying to compare the new site to previous years.  Good did not yet have a final count but indicated pleasure with the crowd size, noting “we did really well on Saturday…it was packed at night.”  Again, hard for me to judge but the Saturday night crowd didn’t seem all that packed to my eyes.  Reports we received on Friday and Sunday attendance indicated the crowd was rather sparse.  Of course, those days are often not particularly well attended.

Reaction from attendees was mixed but leaned slightly toward missing the beach locale.  I talked to dozens of people at the event and scoured social media to get more feedback.  The overall consensus was that the fans were hoping the event would return to the beach next year.  However, many people seemed to have made peace with the move and some shared positive comments including easier parking and more comfortable seating and a better view of the stage for the national recording acts.

Reaction to the headlining bands (The Guess Who and Foghat) was almost universally positive.  I fully agree that both bands put on enjoyable, high quality sets.  Several people were impressed with the addition of a new food item, lobster corn dogs.  I got the impressive that there were some new and interesting seafood (and other) vendors that helped diversify the dining choices, which were starting to become a little too dependent on highly fried options.

You can go to the Pompano Beach Seafood Festival Facebook page to get a feel for the public pulse.  I did notice a few critical comments posted on Saturday but wasn’t able to find them when I looked again tonight.  You can also find an extensive thread from the Pompano Beach Florida Residents Group Facebook page below this article.

There are a lot of changes going on in Pompano Beach these days.  All in all these changes look like they will lead to a more vibrant and prosperous community.  None-the-less change is never easy.  That’s especially true for the people who have called Pompano Beach home for many years.

I fully understand the business reasons that the Pompano Beach Seafood Festival will likely no longer be located on the sea.  I also see that there are a bunch of reasons the new location will offer improvements over the beach set-up.  Still, every April for the past decade, I had looked forward to pulling out my beach chair so I could sit in the sand, beer in hand, listening to a band I’ve loved for years play the greatest hits of my youthful days.  I think I am going to miss that.

For more fun things to do in Pompano Beach and all of the season’s biggest events read Pompano! magazine and search our website.

Deerfield Beach I-95 Crash: 2nd Child Dies, "Our Children are gone. We are totally broken" 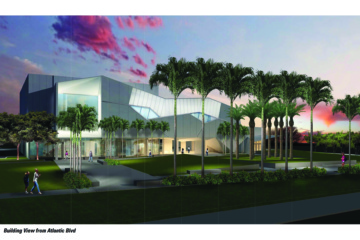