Concerned about sea level rise, Pompano Beach has united with other Broward County cities to comission a 100 year flood map

The City of Pompano Beach will share costs with Broward County and nine other South Florida cities to prepare a “100 Year Flood Elevation Map” to be completed by Geosyntec Consultants, an environmentally specialized engineering firm headquartered in Boca Raton. The interlocal agreement approving the Flood Plan will last two years, and work will commence this year. Pompano Beach’s fiscal cost for the plan is $49,285.71. Neighboring city Fort Lauderdale, nicknamed “Venice of America,” has the highest cost at $98,571.43.

“This 100 year flood map will help determine what our finished floor elevations should be to accommodate the two feet of sea level rise we are anticipating by 2060,” explained Jean Dolan, who works in Development Services for the City of Pompano Beach. “In other places like Houston, or Miami Beach, they have just raised their finished flood elevations by a foot or two. Instead of doing this, our county is really trying to measure the ground to see what the hazards are.”

Geosyntec Consultants will use a model called “MIKE SHE,” which is an integrated modeling of groundwater, surface water, recharge, evapotranspiration and other important aspects of hydrology.

“It is much more in-depth and site specific than the FEMA maps,” Dolan said.“We are using the LIDAR [light detection and ranging] data [from FEMA] at a much tighter grid. Instead of a 250-foot grid, we are down to a 50-foot grid, so its much more detailed data.”

The interlocal agreement indicates that consultants from Geosyntec will update the most recent version of the 2014 FEMA flood studies. Contractors will develop utility tools to translate groundwater flows and improve upon current flood analysis models. The 100 year flood map will not replace FEMA flood zone maps for pricing or removing flood insurance requirements.

According to the policy and research organization Sea Level Rise, the ocean’s waters have risen eight inches in Florida since 1950. NASA, which conducts research on sea level rise using satellites, indicates that sea level rise is caused by two factors both related to global warming: melting ice sheets and glaciers; and the expansion of sea water as the temperature warms.

The coastal parts of Pompano Beach, Deerfield Beach and Lighthouse Point are at risk of frequent tidal flooding. Sea levels are projected to increase approximately 4.68 inches in the next 15 years for all three cities.

How are Cities Responding to Rising Waters?

• New York City is building a $335 million flood wall in Manhattan. The design is called BIG U and was designed by the Bjarke Ingels Group in response to damage done by Hurricane Sandy, which killed 72 people in the U.S. and caused more than $70 billion in damage.

• Norfolk, Virginia is planning a $18.4 million project to engineer a beach at ocean view to reduce flooding. The larger the beach, the more water it stops.

• Miami Beach will embark on a $100 million project to raise roads, install pumps and water mains and redo sewer connections during the next two years across a swath of single-family homes in the La Gorce and Lakeview neighborhoods of Mid-Beach.

• Palm Beach County is spending $17 million to create mangroves, oyster reefs, marsh and seagrass habitats on 70 acres of land. These natural structures absorb storm surges, are cost-effective and improve the natural habitat of the community.

How Do We Measure Sea Level Rise in Florida?

Buoys — There are eight buoys around Florida’s coasts. Scientists use them as tools to keep track of high and low tide daily.

Tidal Gauges — Tidal gauges are large, tube-like structures that measure how high the water moves, quite similar to a measuring cup. These gauges measure the height of the water every six minutes.

Satellites — NASA has launched four measurement satellites since 1992. Satellites in space can accurately calculate the depth of an ocean within an inch. 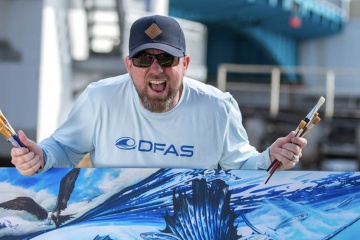