Odd Breed Brewing Company is on a mission to introduce South Floridians to a different breed of beer -- ales crafted using wild fermentation.

Odd Breed Wild Ales is on schedule to open its tap room in Pompano Beach’s new innovation district across the street from Bailey Contemporary Arts this August. The unique craft brewery has officially passed its plumbing inspections, laid its floor and is well on its way to transforming its space into a polished, artsy tap room where patrons can enjoy some light bites, casual live entertainment and Odd Breed’s Wild Ales. Utilizing “wild fermentation,” Odd Breed is a one-of-a-kind concept in South Florida. The mixed-culture brews are aged in French Oak barrels, carbonated in glass bottles and occasionally infused with local and fresh fruits.

The aptly named odd and wild brewery is the vision and co-creation of Daniel Naumko and Matt Manthe. Naumko is a Venezuelan-born, trained musician and ad agency owner turned restaurateur/home brewer who currently operates the Sybarite Pig in Boca Raton. Manthe has been a professional brewmaster for nine years and has been an industry consultant for the past several. Together, Naumko and Manthe wanted to introduce South Florida to the magic and creativity of wild brewing.

“Wild fermentation,” also known as “mixed culture” fermentation, is a unique process that dates back to naturally-made beers before the use of traditional brewer’s yeasts. The controlled fermentation process used for most American ales using brewer’s yeast generally takes only about two to three weeks from grain to glass. In the case of wild fermentation, which uses a mixed culture of naturally occurring bacterias and microbes from the environment (including from trees, fruit rinds and old wine barrels), the process can take anywhere from several months to years.

Julia Herez, a craft beer enthusiast and writer for CraftBeer.com, writes that this way of brewing is “nothing short of immaculate.”

“It truly puts Mother Nature at the helm of brewing magic,” she writes.

While there are brewers on the West Coast and Northeast who use wild fermentation, there are very few brewers in Florida using this process, and none in South Florida to Naumko’s knowledge.

“The process develops a very, very interesting, beautiful and elegant beer that can sometimes be compared to very fine wines and champagne,” said Naumko. “We basically find microorganisms that live within our region that we can culture and add it to our beer that produces great flavor — what they call terroir.”
Similar to wine, where the soil, sun, rain and region affect the grape, Odd Breed trys to incorporate environmental influences into the beer.

“In our case, the only way that we can connect our beer to our region is by picking up microorganisms from the environment and fermenting those out to see what kind of flavors they produce, then adding those to our mixed culture,” he said. “We can add local yeasts and microorganisms that we can find from trees or fruit peel or different sources that produce interesting flavors. We’re adding that to our beers, so now our beers have terroir the same way that wines have terroir.”

“People will drink them and say, ‘Is this really beer? I have never tasted a beer like this.’ They’re right. They’ve never tasted a beer like ours,” he said. “It’s such a small percentage of people in the world that have been exposed to these types of beers. But in the U.S., over the last couple years, there has been a renaissance that has reawakened the style. Now everyone wants to drink these, light, tart refreshing beers that have a strong connection to their environment.”

In addition to fermenting the beers with mixed culture, Odd Breed uses French Oak Barrels to age the beer.
“We look for a more subtle, less vanilla-forward barrel, instead of the American oak,” said Naumko. “American oak is very good for bourbons and things like that, but for us it wouldn’t be the best choice because we’re looking for subtlety and elegance in flavor.”

Odd Breed purchases recently emptied barrels from California, France and other parts of Europe that have been used to make both white and red wines.

“When we get those barrels, we do a thorough cleaning of them to neutralize any potential bacteria that would be unwanted for us in our beers,” Naumko explained. “We fill the barrel with our beer and then we pitch our mixed culture. We allow it to ferment over the course of six to eight months.”

Once the beer is fermented, Odd Breed does “bottle conditioning.” Similar to high-end champagnes, Odd Breed carbonates their beer naturally inside the bottle.

“This usually takes anywhere between six to eight weeks, sometimes even more depending on the gravity of the beer,” said Naumko.

Once the base beer is created, Odd Breed takes some of it to create fruit-infused beers using local and fresh fruits.

“We have teamed up with a lot of local farmers that source interesting, fresh fruits, mostly organic, homegrown stuff that is grown without pesticides,” said Naumko. “We take all those fruits and after the beer is done and ready to go, we take a portion and separate them in different barrels or stainless steel containers. We put fruit inside those containers and then pitch the beer on top. Then we get a beautiful, even more complex fruit character that’s not just an added fruit puree.”

“We made a farmhouse beer in which we used three different varietals of mango that was very successful at all the festivals and beer events that we’ve poured at,” said Naumko. “People love that beer. Love it.”
For fruits not available in South Florida, like cherries, blackberries and raspberries, Odd Breed uses flash-frozen fruits.

“They pick the fruit at its best moment of ripeness and then they deep freeze it and vacuum seal it. It’s very clean. It’s the best way to preserve fruit,” said Naumko. “Theres a lot of breweries locally that use extracts that are not necessarily natural. The extracts leave a very artificial note in the beer. We steer away from that.”

Once the final products are made, Odd Breed bottles their beer in green glass bottles similar to Champagne. The beer comes in both 750ml and 375ml bottles. The labels are all custom-crafted by local artists, including South Florida’s own Rob Lloyd, who is known for creating beer-inspired art. Lloyd’s work can be found in Belgium, Germany and Miami. Naumko says he hopes to support other local artists by featuring their work on the labels and in the tap room.

In addition to supporting local artists through the labels and art, Naumko plans on having live music and spoken word at the tap room. The brewery’s close proximity to Bailey Contemporary Arts, Ali Cultural Arts, Pompano Beach’s new cultural center and the city’s planned artist-in-residence apartments at City Vista, make it a prime location to contribute to a creative village.

“We’re very, very excited about creating this little cool section of Pompano where there’s a lot of art and a lot of creativity going on,” said Naumko. “We have Kombucha makers, we have Blooming Bean brewing, grinding and roasting their own coffee, we have us making craft beer with a very strong connection to the region… I think the vibe is going to be kind of like Wynwood. That’s what I foresee happening.”

While patrons enjoy music, beer and art, Naumko said Odd Breed will also offer some light bites. There will be no commercial kitchen in the Tap Room, but Naumko said Odd Breed plans on having locally-baked bread delivered daily, some local cured meats, artisanal cheeses and a variety of house-made pickles, which

“It’s a very European concept,” he said. “I think people will like it.”

Odd Breed Wild Ales will call Pompano Beach its home, opening its doors across the street from Bailey Contemporary Arts at 50 NE First St. in Pompano Beach. If all goes as planned, the Odd Breed tap room will be open sometime in August. Check OddBreed.com for the most up-to-date details. 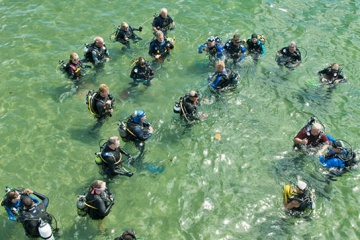