Hey Pompano Beach and Deerfield Beach Music Fans.  This is totally off the path for us, but it’s not everyday that two of our favorite artists- Bruce Springsteen and Taylor Swift both release new music on the same day.

We thought, what the heck, it’s Friday, why not give you the chance to take a break and give a listen.

Bruce Springsteen’s lyric video for “Hello Sunshine” continues his streak of releasing strong music in the 21st century.  I would go as far as to say that his releases since 2002’s “The Rising” have been, almost without fail, stronger than any music he had released since his 1975-1984 hey day.

Variety says, it’s: a change of pace for the singer and a style of music he hasn’t really explored before. While details of the album, “Western Stars” — which has been completed for several years — have been kept under wraps until the official announcement arrived yesterday, Springsteen has been preparing fans for something different. (Read Variety’s review of the single here.) In Variety’s 2017 cover story, he said, “That album is influenced by Southern California pop music of the ’70s: Glen Campbell, Jimmy Webb, Burt Bacharach, those kinds of records. I don’t know if people will hear those influences, but that was what I had in my mind.”

Taylor has given us another piece of ear… and eye…candy.  On ME!, Swift teams up with Brendon Urie of Panic! At The Disco for a tight three minute fifteen seconds of pure pop delight.  The extended video takes the cotton candy tune and turns it into a fun, well produced video.

Swift has been teasing news music for thirteen days on social media.  “ME!” is the first track from what will be her seventh album and third since she made the full-time switch from country to pop.

Just after midnight, the Grammy winner, 29,  dropped the video on YouTube and we weren’t the only ones who took a break from our usual news coverage to give a listen.

The New York Times reports, ME! is chipper and the video is “presented in a wash of opal, springtime pastels, rainbows, cats and sparkles. As the music video begins, a CGI snake bursts into a swarm of colorful butterflies. On Thursday, Swift surprised fans, who had spun elaborate theories about her promotional bread crumbs, in front of a butterfly mural by the artist Kelsey Montague — packed with “clues about the song and the new music,” Swift said on Instagram — in her adopted hometown Nashville. “You guys are amazing for figuring this out,” she told those gathered, “because no one knew we were coming, no one knew this was a part of the campaign.”

Swift also appeared on ABC’s Thursday night coverage of the NFL draft and told Robin Roberts, “‘Me!’ is a song about embracing your individuality and really celebrating it and owning it.”

It’s not likely that most of our readers will like BOTH of the new songs, but hey you never know.  Take a gander at the videos below.

For more news about Cultural Events in Pompano Beach, go to our events listings and read Pompano! Magazine. 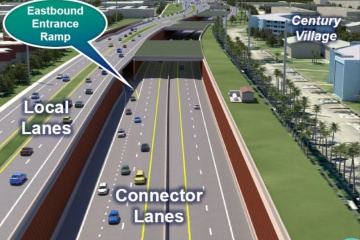