The City of Pompano Beach is set to become a center for soccer development in the United States. The Floridians Football Club is moving forward with plans to build a multimillion-dollar sports complex on a 12-acre city-owned parcel on Northwest 31st Ave. in the Palm Aire area.

It will be a place where boys and girls, ages 4 to 20, can develop their soccer skills, with the goal of playing on college or professional teams.

The proposed project will also be the new home of the Floridians semi-professional soccer team that competes at the national and international level. For the last five years, the team was based in Lauderhill, but will relocate to Pompano Beach when the new facility is built.

The name of the athletic complex will be Floridians Sports Park, said Franck Gotsman, the developer of the project. Gotsman is co-owner of the Floridians Football Club and Vice-President of Plantation-based Azur Equities.

“The sports park is going to be a top-of-the line facility to help the most capable, dedicated players reach the best level they can achieve,” said Gotsman, who hopes the facility will attract not just local players, but players from all over the world.

“We’re going to try to find the best players,” he said, “but the more we can find from Pompano Beach the better.”

Gotsman is developing a recreational league with Pompano Beach that will be held at parks throughout the city. It will be a 10-week program offered four times during the school year, with the first one expected to start toward the end of this August. Each session will cost $135, with a discount for Pompano Beach residents. There will also be scholarships for Pompano residents who need financial assistance.

From the recreational league, players can move up to a travel league, which may start next year. The next level is the academy league, which is for about 200-300 boys and girls, ages 14 to 17, who will live in the residences at the sports park. Scholarships will also be offered to Pompano Beach residents at the travel and academy league levels.

The highest level will be a spot on the semi-professional Floridians team, for those who make it through the try-outs.

Gotsman said the plan is to host international soccer tournaments, and to have some of the world’s top professional teams come train at the sports park during their breaks.

While most of the activities at the complex will be centered around soccer, the multi-purpose fields can be used for basketball, volleyball, rugby and tennis. The main stadium can also be used for football games and concerts.

In March, the City Commission unanimously approved a “memorandum of understanding” with the developer. The agreement outlines pre-development activities, such as permitting, that the city and developer need to undertake while the terms and conditions of the final development agreement and land lease are negotiated.

“We wanted a place where we could be part of the community,” said Gotsman, “and that’s the feeling we had when we came to Pompano. It just felt like home.”

Gotsman anticipates the whole project will cost over $20 million and will take 18-24 months to complete, with construction starting by spring of 2019. He said the complex is expected to create over 100 jobs once it’s opened.

“There aren’t really any complexes like this nowadays,” said Gotsman. “It’s going to put Pompano Beach on the map as far as soccer development is concerned.”

Before construction can begin, the site, which has been determined to be a “brown field,” needs to be cleaned of chemicals and pesticides that have built up in the soil over the years. This process will cost the city $1.5 million, and involves removing the contaminated soil and replacing it with clean soil. The city expects to receive a Voluntary Cleanup Tax Credit from the Florida Department of Environmental Protection for up to 75 percent of the costs.

To complement the infrastructure of the sports park, Azur Equities and the Floridians Football Club will be developing about 80 townhomes within walking distance that will be used for out-of-town players, families and coaches. 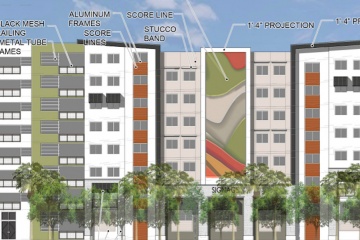