A new dual-brand hotel is being planned for a vacant site at 4060 N. Federal Highway in Lighthouse Point. The site is directly south of the Vintage At Lighthouse Point townhome community.

The 4-story hotel – which pairs La Quinta by Wyndham and Hawthorn Suites by Wyndham under the same roof – is slated to have 93 rooms and 103 parking spaces, according to the site plan.

The developer behind the hotel project is MATT Development, a family business based in Long Island. The project is currently working its way through the City’s approval process.

DeSousa said a vertical parking structure was incorporated to meet parking requirements because the site was too narrow to have all on-grade parking. He added that underground parking wasn’t an option due to the water table, and a podium parking garage at the base of the building wasn’t possible due to height restrictions.

Amenities include a fitness center inside the hotel, and an outdoor swimming pool located between the hotel building and the parking garage. The hotel plans include an area that serves complimentary breakfast for hotel guests, but no restaurant.

MATT Development purchased the property in January 2020 for $2.2 million.

As per the plans, a new 8-foot perimeter wall would be built, which is required between commercial and residential properties.

The site of the proposed hotel has stood vacant for many years. Most recently, it was occupied by Gaucho Rodizio, a Brazilian steakhouse, and prior to that, Chateau De Ville, a catering and event space.

After building the La Quinta and Hawthorn Suites hotel, MATT Development would own and operate it, said DeSousa.

DeSousa, who owns a condominium in Deerfield Beach and lives there in the winter, said his family was looking for property to develop in the area and purchased the one in Lighthouse Point because “we thought it was a perfect spot for a hotel, and it is zoned properly for a hotel.”

“Between running it in a well-organized manner and its location, we expect that the hotel will do very well in Lighthouse Point and will be an asset to the community,” said DeSousa.

DeSousa noted that his son Michael DeSousa, managing partner of MATT Development, was instrumental in getting the La Quinta and Hawthorn Suites project started and to the point where it is right now.

DeSousa said he and his family would eventually like to relocate to South Florida. 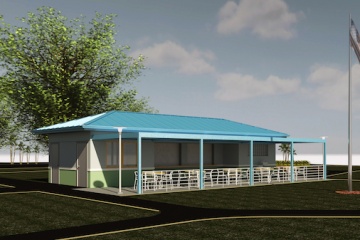