POMPANO BEACH Now that the historic McNab House and its two-story detached garage have been placed in their final positions at McNab Park, the McNab House and Botanical Gardens project will be getting ready to move into its second phase, which will include opportunities for community input.

Once the stem wall and foundation of the house are completed, a master plan for all of McNab Park will be designed, said Nguyen Tran, director of the Pompano Beach Community Redevelopment Agency (CRA), which is carrying out the project.

Bermello Ajamil & Partners (BA), the architectural firm hired by the CRA to create preliminary designs for McNab Park during the first phase, will design the master plan. They will also develop a site plan for the northern area of the park where the house and garage are located. The CRA leases the northern portion of the park from the City.

The house will be converted into a restaurant, and the garage will be repurposed for a use related to the restaurant.

Tran said the site plan would include the design of an auxiliary commercial kitchen, to avoid compromising the historical nature of the house, which dates to 1926. The kitchen would be at the south side of the house, either attached or connected by a covered walkway.

An elevator will be added to the house to make it ADA compliant. The house will also have to be fireproofed with a sprinkler system.

After the McNab House was relocated to McNab Park on March 1, the mover began excavation work to create a basement level underneath the house that the CRA hopes to use as a storage area, as well as a wine cellar where connoisseurs can taste select wines. The underside of the McNab House is made of all Dade County pine, which would become the ceiling of the wine cellar.

The idea is for the garage to be used as a café wine bar, but it depends on how the restaurant operator would like to use it, said Tran.

The CRA plans to issue a solicitation for a restaurant operator before the end of April. The operator of the restaurant will also operate whatever goes in the garage. The process of selecting an operator will likely take several months.

The restaurant operator will be able to provide input regarding how things function, such as the kitchen, in relationship to the house.

While waiting for the restaurant operator to come on board, the architect can start working on various aspects of the site itself, such as setbacks, landscaping and any building requirements, said Tran.

Members of the public will have an opportunity to provide input on the master plan and overall park design, which “has really been the concern of the community,” said Tran.

The intention is to create a garden area at the northwest corner of the site, where the existing Chamber of Commerce building is located. The City plans to purchase the Chamber property soon and tear down the building.

Tran said the public will be able to give their input on how that space will be used. In a conceptual design presented last October, it was depicted as a large, open oval lawn.

Taking into account the coronavirus situation, community outreach meetings will be scheduled as soon as public meetings resume, said Tran.

“There will be several as we go through this process,” he said.

The goal is to have joint meetings of the East CRA Advisory Committee and the Parks and Recreation Advisory Board.

To read about how the McNab house was moved click here.

For more Pompano Beach and Lighthouse Point news go to our website.

Flashback Friday: Jess Taylor performs her single "Do You Feel It Too" at the annual Lighthouse A'Glow in 2014 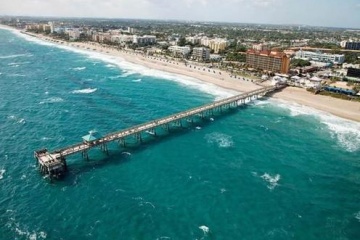