LIGHTHOUSE POINT BOND PROJECTS: At its meeting on Dec. 10, the City Commission approved revised designs for projects, including a new fire station and community center, to be funded with proceeds from the $16.5 million bond issue approved by Lighthouse Point voters in November 2018. The projects are currently expected to be completed by mid-2021.

The Commission was overwhelmingly in favor of the designs, and voted to move them forward to the city’s Development Review Committee, the Community Appearance Board and the Planning and Zoning Board.

José Aguila, of CSAA, described the architecture of the fire station as “a very clean, Anglo-Caribbean design.”

“It’s very consistent with a lot of the architecture that you already have in Lighthouse Point,” said Aguila. “When somebody comes into town you want them to see something that is compatible with the community they’re coming to visit.”

The two-story fire station will have three apparatus bays, and will be a “drive-thru” facility, with two ways for fire rescue vehicles to go in and out, and direct access to a major thoroughfare.

The ground floor will include a lobby, offices, a bunk room, medical storage, the kitchen, a day room, break room and a conference room.

The second floor will consist mainly of meeting rooms. Two large multi-function spaces in the middle will be used for the emergency operations center when it is activated. There will also be a separate warming kitchen, a dining area and two offices.

On the southwest corner of the Sample Road and NE 21st Way intersection, there will be a public plaza with a flag pole, benches and landscaping, which will be visible when entering the city.

Between the fire station and the condominiums to the north, there will be “plenty of buffering,” said Aguila. It will consist of landscaping, parking, and an 8-foot-high concrete wall at the property line.

The fire station will be built to withstand a Category 5 hurricane, allowing first responders and essential city staff to remain in the city during major storms.

The new community center to be constructed at Dan Witt Park ties in some of the same Anglo-Caribbean design elements used for the fire station, such as the roof, stucco and color. The front entrance and lobby will be facing north, toward the basketball courts.

According to the floor plan, the one-story community center includes two multi-purpose rooms that can be opened into one big room, a concession and warming kitchen, a covered patio, a youth game room and storage areas.

The offices of the Parks and Recreation Department will be located at the northwest corner of the building, which provides staff a vantage point to monitor the playing fields, basketball courts and parking lot.

The community center will double as an emergency operations center for the police department, which was not anticipated in the original plans, but was determined to be needed. Like the fire station, the building will be designed as a Category 5 structure.

The plan for the two public works buildings located just north of Dan Witt Park has been modified, explained Aguilar.

Originally, the existing administration building was to be renovated, and the fleet maintenance building across the street was to be replaced with a new one, but that plan would have necessitated raising the street in order to meet FEMA elevation requirements.

In terms of the design of the administration building, Aguila said: “We think we could make that building a little bit more attractive.”

His team will come up with some alternative designs for the building, with a flat roof instead of a pitched roof, and see how it affects the budget, Aguila said.

The final project to be presented to the Commission was the second-floor buildout of the city’s library.

On the first floor, a new elevator and stairway will require raising the roof on two sides of a girder beam that supports part of the roof. The library director’s office, which is next to the circulation desk, will be slightly modified by relocating the door and adding a window. Two rooms next to the director’s office will be repurposed for tutoring. An area right above the youth room that is open to the ceiling will be closed for noise purposes.

The second floor, which will be completely redone, will include a landing next to the new elevator, a community room, a storage room and a restroom.

The Lighthouse Point bond projects are currently in the “schematic design phase,” explained William Gallo, of Gallo Herbert Architects, who was hired to serve as the City’s representative, and to oversee the construction of the new fire station and community center.

The next phase will be design development, which takes the design concepts and incorporates all the details and specifications required for construction. Following that, are the construction documents.

The Development Review Committee reviewed the plans for the bond projects on Dec. 12. The plans are expected to be reviewed by the Community Appearance Board at its Jan. 16 meeting, and by the Planning and Zoning Board at its Feb. 4 meeting, where the public can provide input.

The plans will come back to the City Commission for approval after design development, and when construction documents with the guaranteed maximum price are ready.

A schematic schedule presented to the Commission indicates the former gas station that occupies the site of the future fire station is expected to be demolished in January or February of 2020.

The community center is anticipated to go out to bid first, followed by the fleet maintenance building, and then the fire station.

According to the schematic schedule, all of the work on the bond projects would be completed by July 2021. 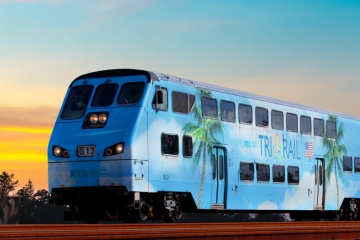