The Lighthouse Point Library may be getting a new children’s wing with funds from the 2018 voter-approved bond issue. The project would replace the City’s plan to build out the library’s second floor using bond proceeds.

The new children’s wing would extend into a portion of the municipal parking lot to the north of the library. It would be a one-story stand alone building that connects back to the existing library building with a glass enclosed corridor. The space between the two buildings could be used for outdoor reading and other programming. The proposed change in plans was discussed by the City Commission at its July 13 meeting.

The second floor of the city’s library was never completed and is currently a storage area with a dumbwaiter to help move books. The original plan under the bond project was to convert the space to a community room to allow for expanded programming and special events. In the revised plan, the library’s current children’s room would become the community room.

William Gallo, of Gallo Herbert Architects, who was hired as the City’s representative to oversee the bond projects, explained to the City Commission that the alternate plan was developed after it was determined the second floor buildout would not be cost effective for the size of the space.

Kaufman Lynn Construction, the firm the City hired to serve as the construction manager for the fire station and community center bond projects, was asked to price the second floor buildout of the library. Pricing came in at $997,632 for construction costs, compared to the original budgeted amount of $471,270 for construction.

To date, $38,775 has been paid to Currie Sowards Aguila Architects — the architectural firm hired by the City to design the bond projects — for library design fees.

Gallo said the second floor buildout would have a much greater impact on the existing operations of the library, and there were unanticipated challenges and costs. The work would be done on top of the entry area, which would require building temporary walls and moving everyone out of that area. In addition, the area has two mechanical systems that would have to be split temporarily. Part of the existing reading room would also have to be vacated.

“You’re basically breaking into every roof in that building — the low roofs to the north, the high roof to the east,” said Gallo.

Another issue is the power lines that run very close to the building. Florida Power & Light said the power lines would potentially need to be de-energized because they risk being knocked down during the construction work, and an alternative power path would have to be set up, which would be an added cost for the City.

The second floor room costs more per square foot because an elevator, stairway and restrooms would need to be added to comply with building code and ADA requirements.

“You’re building all that infrastructure to serve 1,200 square feet,” said Gallo. “That doesn’t make any sense.”

Mayor Glenn Troast noted that the original request from the library and the Friends of the Library was to complete the second floor, so other alternatives weren’t explored.

“When the costs came in and we started seeing what the costs were, that’s when we started looking at other, and what appear to be, in my opinion, better alternatives,” said Troast.

Troast added that another reason for the elevated cost of the second floor buildout is that “material costs have gone up dramatically.”

Commissioner Michael Long said the alternate project is “a bigger bang for the buck.”

The first floor expansion could be built without impacting the operation of the library, said Gallo.

With the first floor expansion, 7 to 9 spaces in the parking lot would be lost. However, the City has already been able to recapture about that many parking spaces on the street behind the library.

Keyes said the children’s wing would be more than twice the size of the children’s room the library has now, and with mobile shelving and mobile seating, “it can be moved into different configurations for different events or different needs down the road.”

“We’re still getting our large meeting room because it will be in what is currently our children’s room, which is nearly identical in size to what would be on the second floor,” said Keyes.

Keyes also likes the idea of the small grass area in front of the children’s wing that could be used as a reading garden or a programming area.

The children’s wing would have an outside entrance as well, so it could be used at night completely independent of City Hall. It would also have a restroom.

The second floor of the library would continue to be used as a storage area.

Gallo said the second floor buildout project could be put out to public bid to see where the prices come in, but “until this market settles down a little bit, I don’t think you’ll do much better.”

A rough cost estimate for the alternate first floor library project is $810,000, which includes a $675,000 construction cost.

“The first floor sounds easier and more user-friendly,” said Commission President Kyle Van Buskirk. “Our expert is saying this is the pivot we need to make at this time.”

After lengthy discussion, the City Commission approved a motion to authorize the expenditure of up to $20,000 out of the bond money to refine the first floor expansion concept and get a firmer pricing. An updated site survey will be part of the expenditure, plus CSAA will be asked to do a schematic for the project.

The City Commission also approved a motion to authorize negotiations with CSAA for full construction plans that would come back to the Commission for approval, and the money spent on the schematic would be credited towards the plans, if CSAA is hired to do them.

More defined costs for the project will be brought back to the City Commission in September. 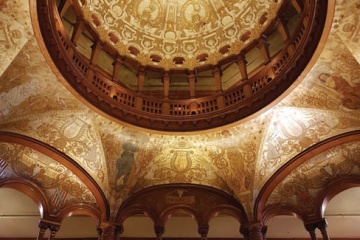