The seat became vacant when Commission President Kyle Van Buskirk was selected by the City Commission on March 31 to fill the vacancy in the office of mayor, following the passing of Mayor Glenn Troast on March 23.

The current term for Seat 4 runs until the next municipal election in March 2024.

Marshall was selected in a second-round vote by the Commission, because the first vote did not result in a majority.

Marshall has served on the city’s Code Enforcement Board and Recreation Advisory Committee, and as a Lighthouse Point baseball coach. He ran for City Commission Seat 1 in the March 2022 election, and for mayor in March 2020.

Marshall, who is retired, told the Commission he has attended approximately 98% of the Lighthouse Point City Commission meetings over the past eight years, and knows what issues the Commission is facing.

Marshall was selected to fill Seat 4 from among three other finalists who submitted applications for the position: Maureen Canada, Troy Ganter and Dominic Romano. At a special city commission meeting on April 20, the finalists were shortlisted from among 10 initial applicants.

Maureen Canada, a resident of Lighthouse Point for 26 years, is president and CEO of her family’s business, the Lighthouse Point Marina, which includes The Nauti Dawg Marina Café. Canada headed the family company that developed Tillotson Square, adjacent to the marina.

Canada’s civic involvement includes serving on the Broward Health Board of Commissioners (2014-2016) as an appointee of then Gov. Rick Scott. She is currently a board member of Junior Achievement of South Florida.

In the March 2022 municipal election, Ganter ran for Commission Seat 2 in a close race against Commissioner Michael Long, who has been on the Commission since 1999.

Dominic Romano, who moved to Lighthouse Point in 1990, is an attorney and is part owner and manager of four commercial real estate companies. Romano has served on the city’s Code Enforcement Board (2012-2016) and the Community Appearance Board (2016-2022), and is currently on the Planning and Zoning Board. He has been a volunteer coach for city sports for approximately eight years.

At the April 25 meeting, every shortlisted applicant was given three minutes to talk about themselves, expand upon or highlight their application, why they feel they would be the best person for the position, and what their vision would be for the future.

After the question-and-answer period, members of the public were given an opportunity to provide their input.

As no candidate received a majority of the ballot votes, there was discussion among the Commission.

Long said he was looking for a candidate who could “jump in” and get to work, so the most important factor for him was the person’s experience.

Johnson said she was giving priority to the two candidates who ran for commission seats in the March 2022 election and went out to the citizens.

Petrone echoed that she wanted someone who could jump in right away and be up to speed on city issues. She noted that every commissioner picked Marshall when selecting the four finalists, and that’s why she was sticking with him as her choice.

Joffe said he supported Ganter because the March 2022 election is “recent and compelling evidence” of what residents want. Ganter earned 1,382 votes, or 48.99%, in his race for Seat 2.

The Commission discussion was followed by a repeat ballot vote. Johnson cast her vote for Ganter and the other three commissioners voted for Marshall.

A motion to confirm the appointment of Marshall to fill Seat 4 was approved unanimously. Marshall was then sworn in by the city clerk.

The regular city commission meeting on April 26 at 6:30pm will be Marshall’s first time attending as a commissioner. The Commission noted that the meeting has a “full agenda.” 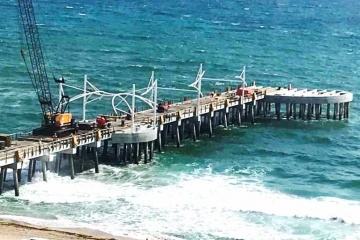