The Lighthouse Point Library’s semi-annual book sale that took place last month brought in $4,522.50. From approximately 7,000 donated books, audiobooks, CDs and DVDs, about 75 percent were sold, and the rest were donated to veterans. Most items were priced at 50 cents to $2.

Library Director Christy Keyes, who starting working at the library in 2010, said there were more books this book sale than she’s seen in the past.

About 30 of the library’s 108 volunteers put in 448 hours of work that included receiving and sorting donations, setting up the sale, working during the sale and cleaning up afterwards.

The proceeds of the book sale will be used to supplement the library’s programming and technology needs and to support its volunteers, said Keyes. The library started having book sales in 1988. They used to be held once a year at Dan Witt park in conjunction with a plant and craft fair. Now the book sales take place twice a year at Dixon Ahl Hall.

The library has already started receiving donations and preparing for its next book sale, which will be held at the beginning of April 2019.

The Friends of the Lighthouse Point Library run the book sales.

This year, the Friends of the Lighthouse Point Library won the Florida Library Association’s Special Projects Award for several projects they recently completed, including the “1965 Society” donor wall, which was named for the year the library was founded.

The innovative donor wall also serves as a teaching wall, where kids can learn about different sea creatures that live off the coast of Florida. Each level of giving is represented by a different creature: angelfish, sea turtles, dolphins, marlins, whales and manatees. There are also starfish that represent the many volunteers who have given 20 or more years of service to the library. 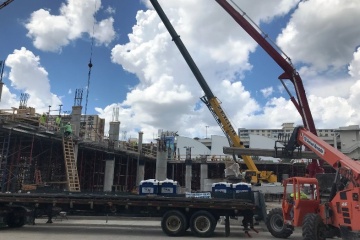