Here's my list of the "perfect" city, if I were "King of Pompano Beach"

I get a kick reading the Facebook posts on our pages and other Pompano Beach oriented pages. For every person excited about changes in the area, there is a another person bemoaning the rapid growth. Since I’ve got plenty of time on my hands these days, I thought I would take some time to imagine what I would do if I were “King of Pompano Beach.” So here is my list of a “perfect” growth plan for the city.

2) Continue to expand the arts and restaurants districts in the city, but not in a way that would make it too crowded.

4) Improve the quality of life in the NW part of town. Reduce crime and unemployment. Bring in new stores, activities and apartments, but not at the expense of the existing residents.

5) For those who grew up here, don’t lose any of the old town charm the city used to have.

6) Improve the quality of our schools and parks. (Don’t raise taxes, though)

7) Build new buildings to help improve the economy, but don’t make any that are too big, too tall, would cause too much traffic or are too close to “my” house. Make sure the prices are affordable.

8) Bring in new classy stores, shops and chains (like a Trader Joe’s) but don’t let them cause any of the old time businesses to close.

9) We love the new Fishing Village and Pier but don’t make it so nice that it becomes crowded and noisy. Same for the upcoming plans for the Isle Casino property and the future Pompano Beach Innovation District along Dixie Highway and Atlantic Blvd.

10) Did you see what the they did in Delray?  Just copy that for Pompano.

The “King of Pompano Beach” list could go on but, of course, it is facetious. It is a fairytale. Half the ideas conflict with the other half, yet all of them are needed to some extent in order for Pompano Beach to thrive.

The solution needed is in compromise. I do believe the city commission has been receptive to concerns from residents. But I also think we need less Facebook yackers and more citizens getting actively involved – and not just when it affects what will go next to your property.

To me, this compromise revolves around two broad principles I have mentioned before:

To accomplish this, we go back to the Top Ten list above to figure out how to balance the unbalanceable as best as we can.

Several exciting projects like the Fishing Village have become bigger than originally proposed. The 3 story hotel turned into a 5 story hotel. The restaurants moved from primarily on the west side of Pompano Beach Blvd. to the ocean side. The outdoor bar and grill plans, while extremely impressive, were also expanded from original proposals. (Full disclosure I live near the area so this could be a NIMBY project for me, although so far I like it a lot). Bigger than planned but none the less pretty cool in my book. The main street will still have a great old-time, beachy feel. However, the proposed Catering Hall was one step too far. A catering hall is not conducive to the feel good, strolling down the street environment causing people want to come from all over to immerse themselves in the experience. The submitted building was far too large with architecture that isn’t suited for the hospitable goal of the area. Luckily, this multi-faceted pressure nixed this plan.

This is just one of many examples where more transparent communication and compromise will be needed for it to succeed as both a growth project and a benefit to current residents.

We also need a comprehensive plan to improve the NW district. Maybe it can’t be done without some displacement of existing residents but it also shouldn’t become a gentrification project that leaves long time residents left out in the cold. Everyone living in this area deserves safe streets, solid schools and access to better jobs (which the new projects can help deliver).

Throughout the city, lots of larger apartment and condo buildings will be popping up. Mostly, the people against them are the ones living next to the project. But the not-in-my-backyard attitude is not as effective as involved residents working together on voicing concerns for each other’s projects. We will have a lot more development along Federal Highway, Atlantic Blvd., A1A and other roads. Bashing them one at a time (often late in the process) won’t achieve much. Residents need to work with the city on a more proactive long term strategy.

And, our biggest focus needs to be on the two enormous projects coming soon. The Isle Casino and Innovation District projects will add millions of square feet of offices, apartments, hotels and recreational space. They are both very bold plans. Those in charge of developing them are shooting for the most ambitious possibilities, including a new $100 million City Hall building (which may or may not be needed). Discussions need to be happening now, not in five years.

The City needs to continue to improve transparent communication and residents need to proactively get involved if they want to help shape the future.

As for us wanting to be like Delray, we can’t be Delray. Our much bigger city doesn’t have the same sort of low key main street configuration and has very different zoning regulations. But, if we move ahead to build, build, build, we could wind up looking like Hallandale. If we do too little,  we could wind up like a blighted Dania Beach. So if we can’t be Delray and don’t want to be Hallandale or Dania, what should we be? What would you do if you were “King of Pompano Beach”? For starters, get off of Facebook and become involved to help create the future of Pompano Beach. 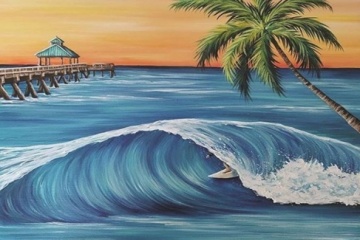