Article and Photos by Marty Lee 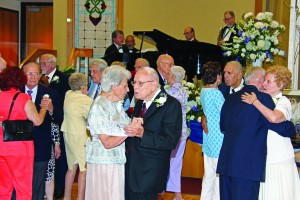 The afternoon of Thursday, June 20, was extremely special for 28 couples at John Knox Village. These amazing couples participated in the Renewal of Vows Ceremony, which only happens once every five years at John Knox Village, a continuing-care retirement community in Pompano Beach.

The unique event was part of The Village’s 45th Anniversary that began last September. Typically, Renewal of Vows welcomes couple that have celebrated more than 50 years of marriage. However, the rule was changed to include those 45 and greater this year.

The official longest married couple, Irwin and Paula Woolf, who celebrated their 75th Anniversary this year, cut the wedding cake. “We met at a sweet 16 party,” Paula recalls. “I went with a younger man and went home with Irwin.”

Other John Knox Village couples share similar stories. WD and Vera Leip (59 years this October) met when they were in the 8th grade and have been together ever since.

Richard and Gloria Tomey, who have been married for nearly 54 years, met when Gloria was dating a friend of Richard’s. When the friend left for military school, he asked Richard to keep an eye on Gloria for him. They were married three years later.

Ron and Dee Davis met while attending Baldwin Wallace University near Cleveland, Ohio. They were married on June 19, 1954, in East Liverpool, Ohio, which is half way between Dee’s hometown of Pittsburgh and the University.

As the ceremony began, each couple was announced as they walked into our Auditorium. And then, Reverend Greg Fitch, JKV Spiritual Life Director, performed the ceremony. This followed with cake, dancing, photo opportunities and entertainment provided by the Ted Knight Orchestra. 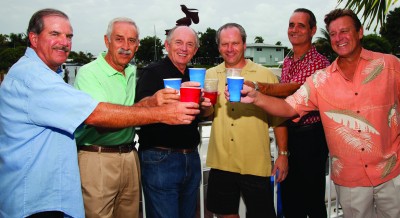