A LIFETIME OF GEAR

Tom Greene has spent a lifetime fishing and helping others to fish. Along the way, he collected some of the most impressive antique fishing reels, lures and other gear.

I first interviewed Tom twelve years ago, in his office at Custom Rod & Reel, the tackle store he owned for 43 years and recently sold.His office then, and his house now, was jammed with fishing tackle from across many decades.

When we met recently, I slowly started to realize the age and authenticity of all this gear. A one-hundred-year-old fishing reel has a very distinct look. 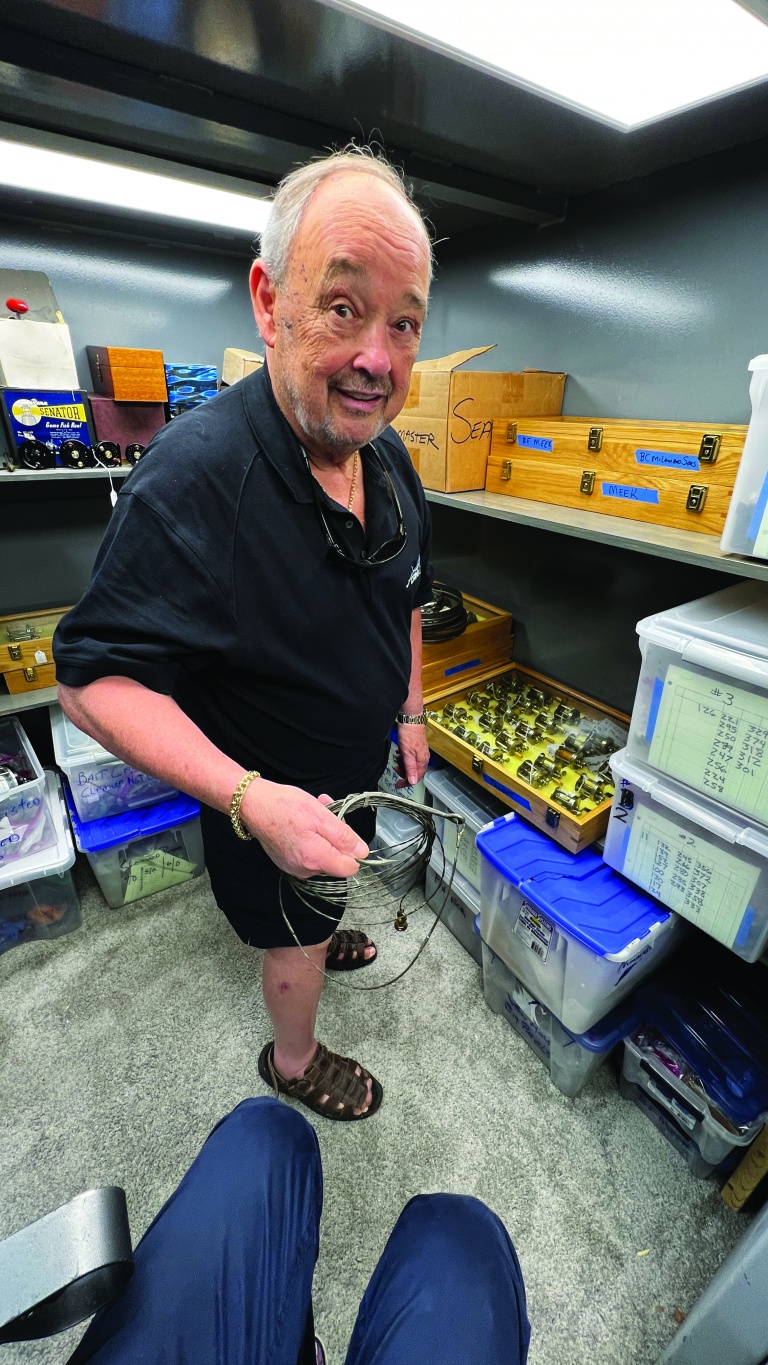 He explained to me why some of the antique reels look like a piece of fine jewelry, “because these were made by watchmakers. Wealthy fishermen wanted good reels, so they commissioned local watchmakers because they had the tools and understood gears,” he told me with the enthusiasm of someone who just learned this fact, but obviously, he learned this years ago.

We could dedicate an entire issue of this magazine explaining the history and evolution of sports fishing tackle over the last century. I imagine most residents are not eager for that level of knowledge when modern equipment is widely available at every price point.

“Sometimes the packaging is more valuable than the item,” Tom jokes. As we walk from one room to the next, our conversation jumps from topic to topic as Tom describes everything effortlessly.

I, like many people, remember my first fishing experiences with vivid clarity. Many of those memories were with my father, and I have incredible memories of my own children when fishing.

The physical tools that facilitated those memories will always have value for generations to come. 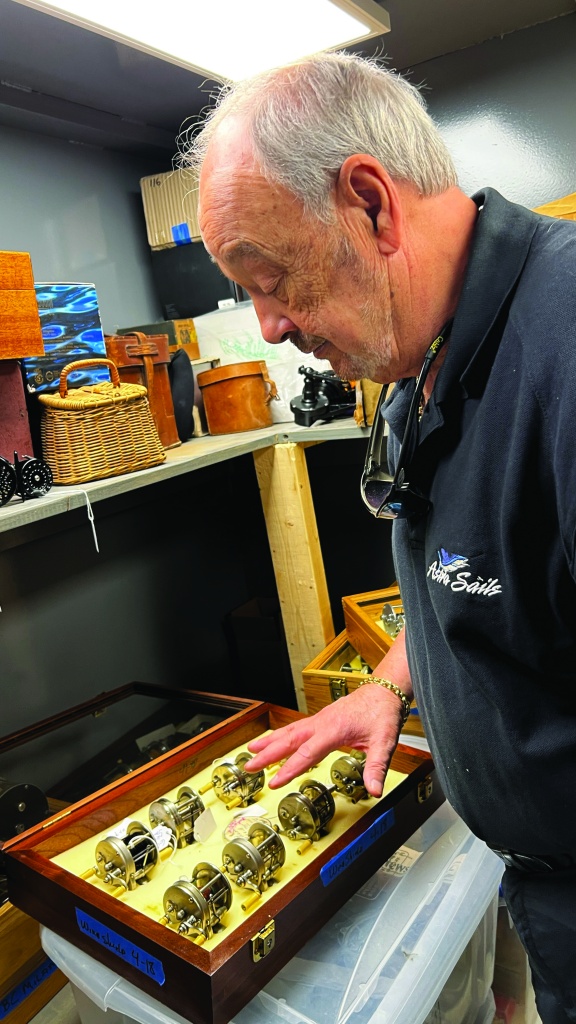 The technological advancement of fishing tackle is often overlooked among humanity’s achievements, like discovering new continents or flying in air or space — but many people fish and need fish to survive. The invention of the reel, a cylinder with line wrapped around it and the means for the line to go in and out, yeah, that was a game-changer for fish populations worldwide.

Thank the Chinese in the late-18th century for the first versions, but more modern versions that were designed for specific species of fish really took hold in the mid-19th century.

But the last hundred years are represented a lot by what Tommie has personally collected.

I spent some time on eBay and other sites looking at what people are selling and comparing items to what Tommie showed me. The world of antique fishing gear trading is alive and active. 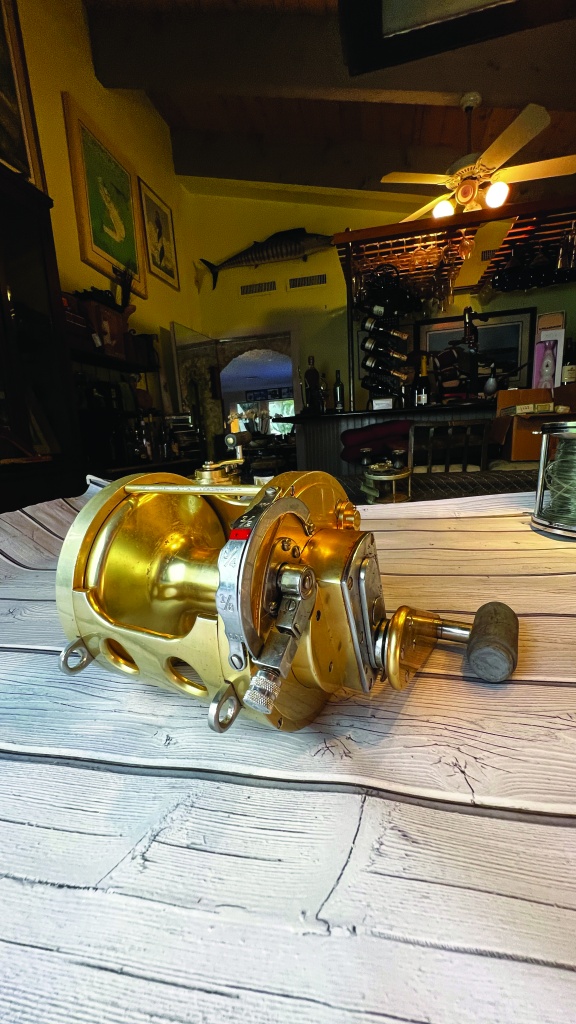 WEALTHY FISHERMEN WANTED GOOD REELS, SO THEY COMMISSIONED LOCAL WATCHMAKERS BECAUSE THEY HAD THE TOOLS AND UNDERSTOOD GEARS.

“What are you going to do with all this stuff?” I asked. Sorry dear readers, I did not get a clear answer. I think there is a lifetime of attachment to the collection.

He has tried to sell the items through a collaboration, but that ended with a bad taste. Tommie’s website (antiquereels.com) does have what appears to be a complete inventory of the items and prices. Transactions are handled via email, telephone and in-person. 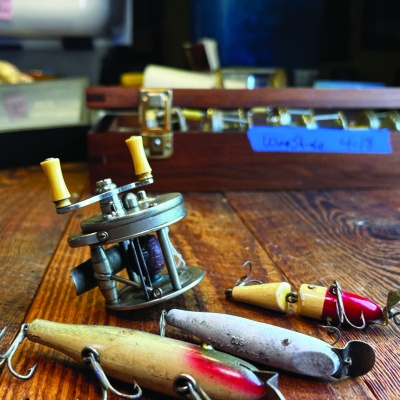 “The is the same reel from the movie Jaws, a Penn International 16/0, the top of the Penn line in the ‘70’s” according to Tom.

Fun Fact: In 1979, Frank Mundus, the inspiration for Robert Shaw’s character in the film Jaws, caught the largest mako shark ever on rod and reel, weighing in at 1,080 pounds, also with one of these reels 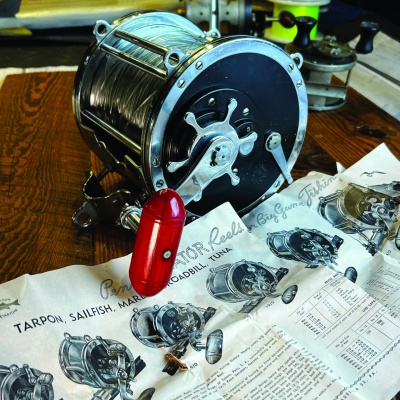 “Look closely as the “windshield wiper arm” works back and forth to guide the line on smoothly,” Tommie explains as I watch the mechanism work in a manner I had never seen before. Tommie has a remarkable collection of just these reels from the 1920’s — with some fantastic stories to go along with several of them. 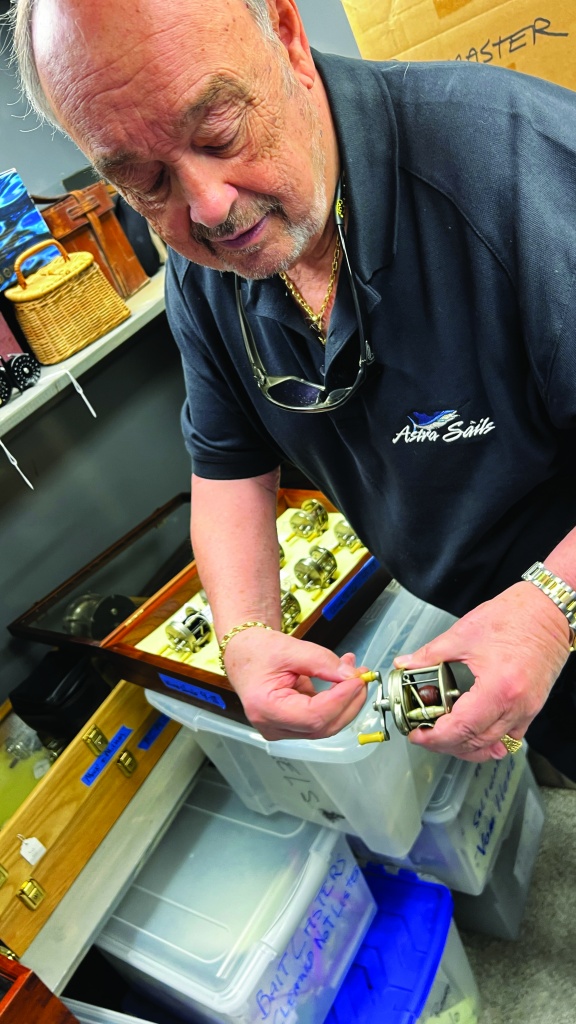