A private reception was held on Friday evening at which guests could preview the art and interact with the artists. Food and drinks were served on the Sample-McDougald House grounds, also known as Centennial Park. During the evening, Pompano Beach Mayor Lamar Fisher welcomed the Highwaymen artist and presented them with a key to the city.

The following day, the exhibit was open to the public and nearly 2,000 people took advantage of spectacular weather to visit the Sample-McDougald House and view the art. Both the restored 1916 house and the art garnered rave reviews. One of the volunteers noted that the organizing committee had hoped to attract about 600 people that Saturday, but had exceeded that number shortly after noon.

The Florida Highwaymen are a group of 26 landscape artists who have been called “The Last Great American Art Movement of the 20th century.” This group of self-taught and self-mentoring African-American artists, who began painting in the mid-1950s, created a large body of work – utilizing basic construction materials rather than traditional art supplies – that has become a timeless collection of iconic Florida landscape scenes. As no galleries would originally accept their works, the artists sold the oil paintings by the thousands during the 1960s and 70s out of the trunks of their cars, along roadsides throughout Florida.

The surviving Highwaymen, most now in their seventies, represent an important chapter in America’s culture and history, and have been called a National Treasure. The 26 Florida Highwaymen were inducted into the Florida Artists Hall of Fame in 2004.

How will Pompano Beach spend $181 million of your money?  UPDATES ON CITY PROJECTS 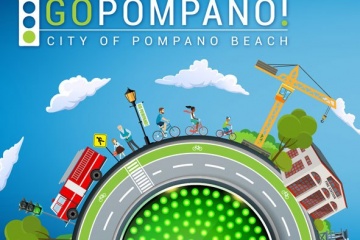