A large number of residents turned out for the Feb. 12 City Commission meeting to have a discussion about a service they would like the City to allow for Lighthouse Point boaters: gasoline delivery to private homes and docks for their boats, which they say is cheaper and more convenient than purchasing gas at a marina. The City currently allows delivery of diesel fuel, but not gasoline, due to fire safety concerns.

The impetus for the discussion was a request made at the Jan. 8 City Commission meeting by Commissioner Earl Maucker, who said he had been approached by numerous residents who are interested in dockside gasoline delivery. He said a fuel delivery vendor who resides in Lighthouse Point had told him that there are new technologies in place that make it much safer than in the past. City Commissioners recalled discussing this topic several times in past years, but no further action was ever taken due to the fire safety risks.

“Whether you agree that we should have delivery or not isn’t as important to me as having a dialogue about it,” Maucker told the Commission.

Maucker made a motion to have Lighthouse Point Fire Chief Shawn Gilmartin prepare a report detailing his thoughts and concerns about dockside gasoline delivery in the city. The motion carried in a 3-2 vote, and Gilmartin presented his report at the Feb. 12 City Commission meeting.

According to Gilmartin, home gas delivery is a dangerous proposition.

“Gas is flammable at all times,” he said. “It can be lit at minus 45 degrees, so basically, at all times, gas is giving off fumes that can be ignited. That’s the danger.”

Gilmartin explained that gasoline is lighter than water so it floats, and that’s why the fire department uses firefighting foam to put out gasoline fires. But the foam is expensive and the fire department only keeps a total of 80 gallons on hand – a 30-gallon tank on each truck and 20 gallons of spare foam at the station – and a lot of it would be needed when dealing with big boats and a lot of gas.

Gilmartin also noted that the fire department’s staffing is limited, with only six people on duty per shift.

One of the other main dangers associated with gasoline is static electricity that’s caused when the gasoline flows through the hoses.

“As far as the fire department is concerned, we’re trying to err on the side of safety,” said Gilmartin. “We want everybody to be as safe as possible.”

During the lengthy discussion, residents expressed their views on the issue.

“We are a boating community, we should be able to fuel up at our home,” said one resident. “The cost is significantly different.”

One opponent said: “Lighthouse Point is different from other cities. We don’t have to do everything other cities do.”

The owner of a fuel truck company in Boca Raton told commissioners about the technology his trucks and nozzles are equipped with, including grounding against static electricity and three cut-off points for the fuel.

A resident who ran a boatyard for 20 years said technology improvements are in the boats, which now have outboard engines. He also noted that at home boats are cold when fueling up, whereas at the marina the boats are hot, which is an increased risk.

Some people said they really didn’t see the safety issue because in the neighboring cities that do have home gasoline delivery, they have not heard of any incidents ever happening.

“Just because nothing has happened, doesn’t mean it won’t happen,” a resident said in response.

“It’s a policy question,” said Commission President Jason Joffe. “I don’t think there is a definitive right or wrong answer. The answer of allowing it is right, if sixty years go by and there’s never an incident. The answer is completely 100 percent wrong if we allow it and, God forbid, something happens.”

“It’s an increased risk. It’s not even a little risk, it’s a big risk…an explosion,” said Commissioner Michael Long. “Our job up here is for the health and safety of our residents, and that is my biggest concern and always has been when this issue has come up.”

“I understand and respect all the safety concerns…but I think it’s a conversation that should continue,” said Commissioner Maucker. “I don’t think we should just stop it tonight. I think there are legitimate issues raised by our residents and we should keep an open mind.”

None of the other commissioners were in support of continuing the discussion. 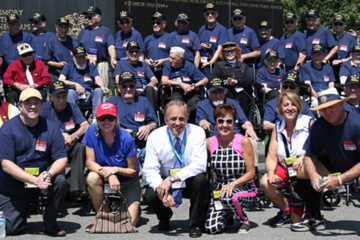