Who doesn’t remember Frank Sinatra and Dean Martin, famous for their acting and smooth crooning styles, better known as part of the Rat pack during the 1950’s. Frank & Dino’s pays homage to the duo, both inside and out, with a nice play on black and white with photographs and checkerboard covered chairs.  With a touch of color in deep, plushy banquette seating, it invokes the clubby feel of a New York nightclub with brick, dark wood and large oversized drum shaped lights. With softly hued blue lights around the bar, you might almost expect either Frank or Dean to walk into the dining room at any moment and belt out a tune or two.

Formerly Marcello’s for over 20 years, this is a “lifestyle dining concept” by the Max Group with Dennis Max as the original investor and John Williams as the primary owner and major investor. So where did the concept actually originate? Meet Carlo Vaccarezza, managing partner. Brought in as a consultant, he was inspired by the simple flip of a radio switch that just happened to be playing the song the same way he wanted to conceptualize the restaurant, Frank Sinatra’s famous “My Way.”

Doing it his way seemed to be paying off as the night we were there, a Monday night no less, the restaurant was filled by 7:15 pm and stayed that way.  Carlo wanted to create something unique. “If our customers close their eyes they will think they are in a joint in New York or Chicago.”

It appears he has succeeded, mentioning that many are repeat customers. With live music offered up Wednesday through Sunday from the best of Frank Sinatra and Dean  Martin to today, the atmosphere is convincing.

With chefs Antonio Orsino from NYC Primavera and DaNoi and Peter Masiello from Bova guiding the kitchen, much of the staff has worked with each other as well as Carlo, creating a comfortable camaraderie that emanates throughout the restaurant. Patio seating outside and 120 seats inside, the well-stocked wine room shows the care taken to ensure that food and wine complement each other.

We had the pleasure of being attended to by Michael J. who was well-informed regarding the menu, as well as Jerry Alfano, general manager, who is as smooth and debonair as old blue eyes himself. Taking the time to warmly greet each and every customer, Jerry made sure that they felt as if they had walked into his home to share a great Italian meal.

The basket of warm, sliced baguette bread was served appropriately with a small dish of olive oil and herbs. Appetizers are always an interesting part of the menu as it sometimes serves up surprises and the Peperoncini  Ripieni ($11), one of the restaurant’s most popular dishes, is no exception. Breaded and lightly fried long hot peppers, stuffed with moist sausage and served with a refreshing side of marina, were perfectly crunchy and definitely spicy.

Calamari Fritti ($13) was presented with a light batter, lemon wedges with caramelized onions atop and a marina sauce for dipping. Resisting the temptation to indulge too much so early, the Antipasto Misto ($17) was a visually resplendent feast for the eyes that quickly engaged the taste buds as well. Attractively arranged glistening with drizzled olive oil on a large, oversized oval plaster, the marriage of thinly sliced salami, sopressata, melt-in-your mouth prosciutto, provolone, reggiano, roasted peppers, anchovies and an assortment of green and nicoise olives stole the show. The smokey sweetness of the plump pepper flesh played nicely with the cubes of provolone and reggiano cheeses. The anchovies, well they were above perfect, simply the best, taking what should be a typical, ordinary dish to a must try!

Italian kitchens are known for their soups or zuppa, and here the Zuppa Di Pasta E Fagioli ($6) is a wonderfully satisfying Tuscan soup of white cannellini beans served with tubettini pasta that proves the point. An absolute favorite and recommended by Michael J., a little freshly grated cheese on top added just the right touch.

Prepared for what came next, was the Lombata Campania ($34). A colorful platter, it was amply filled with pounded veal chops and a delightful mixture of sautéed vegetables. Pan-seared, the veal chops served bone-in, were buried by a pile of sautéed Vidalia onions, roasted red peppers and a mixture of sliced mushrooms, including button and porcini. Using the vegetables almost as a relish on the veal chops, each bite was as interesting as the next.

Running nightly specials is their specialty usually including an appetizer, a pasta, chicken and veal dish along with a risotto. Yellowtail snapper is on the menu along with at least one or two additional fish specials featuring the freshest catch of the day. They are known to accommodate special requests.

A bonanza of flavors, textures and aromas can only begin to describe the next dish. Frutti Di Mare ($38) came loaded with steamed, briny littleneck clams, tender black mussels, shrimp and an abundance of calamari, served over a bed of al dente linguine. The tomato sauce, made from San Marzano tomatoes with bits of garlic and spices was just enough to complement not over power the array of seafood delicacies. Easily large enough to feed two moderately hungry people, this special is usually offered on the weekends.

Sauces are made in house as are the soups, ricotta cheese and the desserts. Learning that desserts included a tiramisu, Frank & Dino’s and Amore, the lover’s cake seemed to make perfect sense. The tiramisu ($11) was light with the layers, flavors and textures assembled showcasing a talented pastry chef’s hand.

Frank & Dino’s ($11) turned out to be a two layer sponge cake with a chocolate mousse filling, punctuated with rich and decadent dark Italian cherries, liberally sprinkled on the outside with almond slivers.

Amore, the lovers cake ($11), lived up to its name. With layers of sponge cake and a layer of apricot then raspberry filling spiked with Grand Marnier, it is the piled high white icing on the outside, sprinkled with chocolate flakes that make it the special dessert for that special someone. Ahhh, love!  Cappuccino was nicely served with a sugar stick.

While there is no happy hour as of yet, the extensive wine list including some definitely celebratory champagnes ranging from Perrier Jouet “Fleur” Rose Epernay, 2002 ($465) to Lunetta Prosecco ($11) should satisfy the palette of a wine connoisseur. The house wines available by the glass ($9) were all equally quite good and smooth; choose from cabernet, merlot, pinot noir or chianti. One of their more popular wines by the bottle is Castronovo, Montepulciano de Abruzzo, 2007 ($34). Bottled beer selections included domestic Miller Lite ($5) or import, Heineken ($6).

Frank & Dino’s is located at 718 South Federal Highway, Deerfield Beach. Tel: (954-427-4909), www.frankanddinos.com  . A private room that can accommodate up to 24 people is available, advance reservations, especially for the weekend is recommended.

(This review is for promotional purposes only) 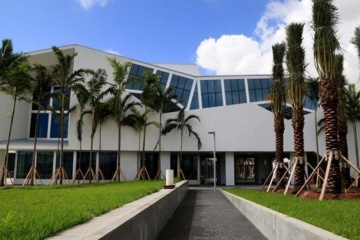