The City’s concerns over a proposed bike lane project along Federal Highway, from Sample Road to the Palm Beach County line, were lessened by a revised plan that was presented by the Florida Department of Transportation (FDOT) to the City Commission at its Nov. 13 meeting.

FDOT, in conjunction with the Broward Metropolitan Planning Organization (MPO), has plans to widen the existing three-foot-wide northbound and southbound bike lanes, but city officials were opposed to a project design that would have threatened 57 trees (including 45 valuable royal palms) that Lighthouse Point established and maintains along the east side of Federal Highway, as well as 11 trees in the median area.

The project design required widening the outside (right-hand) lanes of the highway by one foot and taking two feet from either side of the median area, in order to create six-foot-wide bike lanes that include a buffer zone.

The project’s original concept called for widening the outside (right-hand) lanes of the highway by four feet in order to create a seven-foot-wide bike lane, which would have impacted many more Lighthouse Point trees.

The revised plan that was presented to the City Commission will take two feet from either side of the approximately 20-foot-wide median area – comprised of the left-hand turn lanes and the landscaped traffic separator – and nothing from the outside lanes, which will create 5-foot-wide designated bike lanes with no buffer. It will require narrowing the left-hand turn lanes from their current width of about 13 feet, to a minimum width of 11 feet, according to Scott Thurman, the FDOT project manager. All travel lanes will remain 11 feet.

This new option will impact a total of 11 Lighthouse Point trees, all in the median area, but no royal palms. Seven of the trees could be relocated along the project corridor using state funds. The City could use its own funds to place the four remaining trees, mahoganies which are more difficult and expensive to relocate, somewhere within the city.

Thurman said that FDOT and the MPO had sought a way to incorporate the bike lanes, while minimizing as much as possible the impact to the aesthetics of the corridor. Although the MPO had wanted the bike lanes to have a buffer, it supported the revised plan. The project is an MPO “priority project” that will use state funding.

The bikes lanes will have the same footprint in the Deerfield Beach portion of the corridor, which is also affected by the project. The lanes will be striped, marked with thermoplastic bicycle symbols and have post-mounted signing. The current 3-foot-wide bike lanes are considered a paved shoulder, not official bike lanes.

The entire project corridor will be milled and restriped. In addition, FDOT has plans to add a “peanut island” in the center of the intersection at NE 41st Street (in front of the Vintage at Lighthouse Point townhomes). It’s the only intersection within the Lighthouse Point project corridor that doesn’t have traffic signalization. Because the bike lane project will reduce the median width, it creates a safety concern for cars turning left onto Federal Highway, said Thurman. With the new island, cars exiting the Vintage or NE 41st Street onto Federal Highway would only be able to make a right-hand turn.

FDOT will hold a public hearing regarding the proposed island in the NE 41st Street intersection. The hearing is required by state law because it involves a change to the median access. The exact date and location of the hearing have not yet been determined, but it will probably take place in January. FDOT will send flyers with details about the hearing to property owners in the affected area.

As part of the bike lane project, FDOT also plans to improve pedestrian features by adding countdown signal timers for crosswalks at all signalized intersections along the corridor, as well as “high emphasis” crosswalks that will raise awareness of the pedestrian crossings through striping. Curb ramps (an ADA feature) will be standardized throughout the corridor, and some spot drainage improvements will also be made.

Thurman said that FDOT will coordinate with the county to try to optimize the synchronization of traffic signals in the corridor to allow a better flow of traffic during peak hours.

The City Commission had no objections to the new plan. The project design is expected to be completed in March 2019. Construction would likely begin in August 2019, and take about one year to complete. FDOT will come back to the Commission with construction documents and plans to review. 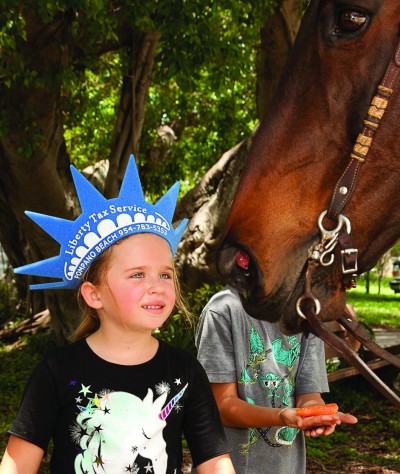