From Feb. 22 to March 17, the Pompano Beach Cultural Center will host a retrospective exhibit featuring the works of Laurence Gartel, the “Father of Digital Art.” The exhibit will trace the evolution of technology and digital art through Gartel’s visionary work.

When Boca Raton-based artist Laurence Gartel began exploring digital art in 1975 as an eager 19-year-old in Buffalo, New York, he had a vision. He saw a world in which art would be created using digital technology — a world in which, eventually, digital art would replace painting. At the time, his vision was inconceivable. His idea was mocked. Gallery doors slammed shut in his face. No one could even begin to comprehend his vision. Now, just over 40 years later, in a tech-savvy world with smartphones, Photoshop, image-editing apps and Instagram, it’s hard to imagine a time when capturing images wasn’t as easy as a flick of the finger.

“Not only did I see the idea [for digital art] before anybody else, but I spent all my life trying to prove it,” he said. “When I started, I was the only one. Now the whole world is a digital artist. It’s shocking to know that I am the person that started it.”

When Gartel first started exploring digital art, the technology to save his work did not even exist yet. There were no floppy disks. The only way to capture an image was on a camera. Gartel recounts the story of how it all started: He was 19, sitting in the back of a classroom at the School of Visual Arts in Buffalo, New York. His class was watching a Charlie Chaplin film called “Modern Times.” His brain started wandering, thinking about how he could capture a still image of what he was watching. He took out his long lens camera and tried to photograph the screen, which wasn’t easy. At the time, moving pictures were created with film strips, which meant a moving line entered the screen every few seconds. He was clicking away when a guy tapped him on the shoulder.

“What are you doing?” the guy asked.

“There’s a place in Buffalo you can do stuff like that,” he said. The stranger invited Gartel to a little hole-in-the-wall place in one of the dingiest, most dangerous parts of the city.

“I thought, ‘Am I an idiot? He probably wants to steal my car and my wallet and my camera.’ But I went anyway because I was curious,” Gartel remembers. “Upstairs was a place called Media Study Buffalo.”

It was there that Gartel got his start, followed by a job at an experimental television station in Binghamton, where he met a “video guru” named Nam Paik. Together Gartel and Paik started experimenting with altering moving pictures using primitive analog systems, voltage meters and magnets. A photograph taken of Gartel in the late ‘70s probably best captures the spirit of his quest. In the black and white photograph, Gartel is surrounded by gadgets, wires, knobs, voltage meters and old-school computers. He appears as the mad scientist, literally inventing his own technology to manipulate, capture and save digital images. He said it is hard to explain what he was doing, but he tries.

“The gray scale,” he explains, “has eight shades. By tuning into specific shades of gray and altering their volume at a given axis point, we could change and alter the image.”

Once the image had been manipulated, Gartel would capture his work with a still camera on a tripod. Soon, he started using a Polaroid SX-70 camera with instant film to achieve immediate results. He would collectively put these images together to create a “Digital Quilt” which he called a “Polaroid Mural.”

Gartel started collecting these works and eventually put together a portfolio. He went door-to-door to galleries around New York, where he was denied and mocked. He shares a story of how at the Bonino Gallery on 57th Street, the curator told him, “Look kid, come back in 20 years.” So that’s exactly what he did. Twenty years later, he went back, still with no success.

“For so long, it was like I was Jesus…Like I was a prophet and was going around telling them the end of the world, or the beginning of the world,” Gartel laughs.

In spite of the rejections, Gartel kept at it, discovering new techniques while working his way deeper into the New York art scene amongst legendary creatives and musicians like Jean-Michel Basquiat, Sid Vicious and Mick Jagger. He met Andy Warhol at Studio 54.

“Everyone who was anyone could congregate there,” he said. “It was a magnet for artists of all skills…It was there that I struck up a conversation with Warhol about the potentials of computer art. He invited me to his studio to help him learn the Amiga Computer. He was very shy, and I showed him the toolbox and how to use the video camera to input images into the system.”

“Most people believe digital art came out of the pop art era and that Andy Warhol taught me, when in actuality it was reversed,” Gartel said.

In the ’80s, Gartel finally started to make strides. His “Moz Ocean” piece, a Polaroid SX-70 mural consisting of 324 individual prints, was showcased at MoMA PS1 in Long Island City, New York and the Long Beach Museum of Art in California. In 1989, Gartel created the first digital art cover for Forbes magazine. That same year, he released his book, “Laurence M. Gartel: A Cybernetic Romance,” and had a museum show called “Laurence Gartel: Nuvo Japonica” at the Joan Whitney Payson Gallery in Portland, Maine. Gartel is particularly proud of that show because it was on this occasion that his work actually replaced Van Gogh’s “Irises,” which had previously sold at auction for $53 million. In its place is where Gartel’s work was showcased. In that moment, Gartel knew his once cockamamie prediction had indeed come true. His digital art literally replaced a Van Gogh.

Since then, Gartel’s work has garnered him a wide range of international successes. He created the first Solar Powered Satellite Art Truck in Hamburg, Germany and drove it through five countries, arriving in Monte Carlo as the Official Artist of the Monaco International Film Festival. He created a famous Absolut Vodka advertisement and the art for the NASA Magnetospheric Multiscale (MMS) Mission launch at Kennedy Space Center. He started creating “art cars” — cars wrapped in colorful digital artwork — in 2010, when Tesla, the electric car company, asked him to produce a car to showcase during Art Basel Miami Beach. Recently, Gartel was the featured artist of the Oslo Motor Show in Norway, creating a BMW art car live in front of 40,000 people.

Perhaps his most famous work of all: the official artwork for the 57th Annual Grammy Awards. That striking work features a life-sized version of the iconic Grammy statuette wrapped in the distinctive psychedelic imagery of the artist using vinyl, glitter and prismatic materials. The piece graced the cover of the Grammy Awards program book, telecast tickets, poster and other promotional materials.

Right now, Gartel has a touring show in Europe with a 300-page accompanying book called “Warhol vs. Gartel: Hyp Pop.” The show pairs up Gartel’s work with Warhol’s to show the evolution of pop and digital art.

As a creative visionary, Gartel is continuously trying to push the envelope.

“The drive, the indefatigable drive, still exists because I can never rest on my laurels. I can never kick my feet up,” he said.

So what’s next? Gartel believes 3D digital art created with 3D printers is the wave of the future. He was the visionary for the 3D Print Show in Santa Clara, California and has talked of getting involved with the digital technology center in the new Pompano Beach Library, which opened last month and features a 3D printer.

Gartel’s exhibit at the Pompano Beach Cultural Center, entitled “Laurence Gartel: A Cybernetic Romance” (after the name of Gartel’s first museum exhibition at the Fine Arts Museum of Long Island in 1988), will be on display from Feb. 22 to March 17. Visit ccpompano.org for more information. 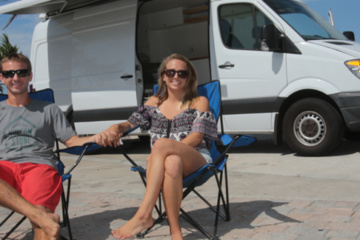