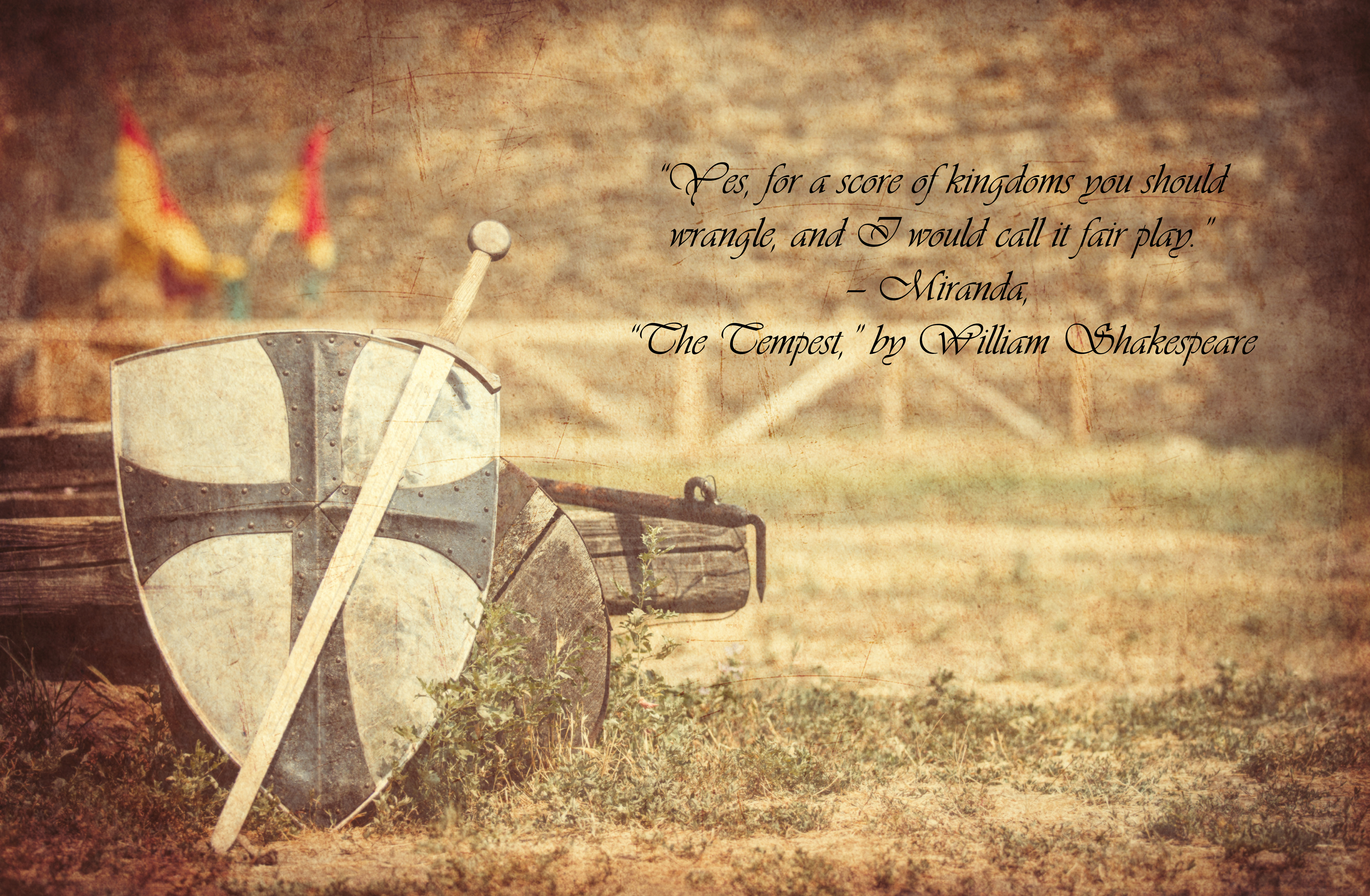 The 25th annual Florida Renaissance Festival in Deerfield Beach began Feb. 11, and continues March 4 – 26, every Saturday and Sunday, 10 a.m. to sunset. The seven-weekend event celebrates the rich European era of the 14th to 17th centuries.

In the northwest corner of Quiet Waters Park, a grand and whimsical world has been constructed. A castle entrance beckons guests to enter through its arches; a king and queen perch on their thrones to watch knights joust to the death wearing heavy silver armor and ornate battle gowns. Children thrust lances through a golden ring while riding a wooden horse down a greased cable called a Quintain. A family of tightrope walkers tiptoe precariously atop a 30-foot high-wire above dropped jaws. Across a courtyard, an expert archer aims his handmade wooden bow, nailing a target from a spectacular distance, and an apothecary gives lessons on medicinal plants. Shakespeare’s “The Tempest” is performed for a standing crowd of about 200 people. Hungry adults sink their jaws into juicy turkey thighs and guzzle cold beer, while actors mingle in costume in the streets. These are some of the delights to be had at the Florida Renaissance Festival, which will be celebrating its 25th anniversary and 18th year in Deerfield Beach.

Bobby Rodriguez, the festival’s founder and organizer, took me and Point Publishing photographer Joe Yerkovich on a golf cart tour of the festival grounds in early February as crews moved pallets with forklifts and constructed the festival from the ground up. The transformation of Deerfield’s lakeside park into a Renaissance-era village is remarkable.

“I’ve been doing it long enough that I’ve become a logistics expert,” said Rodriguez. “Just like a recipe, you have to put it all in a certain order for it to taste right.”

Every year, the festival evolves, bringing in new acts, inviting new talent and perfecting the layout.

As Rodriguez pushed the gas on his golf cart, giving us the grand tour while wearing a Renaissance-inspired costume with leather details, he highlighted each festival feature.

“Over there is our jousting show,” he said, pointing to a vast dirt arena. “It will probably be the single most exciting act. They’ve never done our show before and I think it’s going to be the most exciting we’ve ever had. They add a lot of trick riding and battle it out on the backs of two chariots.”

Rodriguez had been visiting the Georgia Renaissance Festival when he heard about the joust act by Debracey Productions.

“People raved about it. When I saw it, I said to them, ‘You’re mine. I’ve got to have you,’” Rodriguez recounted.

“This year we also have a pirate-themed high-wire act,” he continued. “It’s a family act. I think there’s five of them — they travel the country. They have this giant facade and they walk the wire from one mast to the other.”

The tightrope-walking Murcia family from Bradenton, Fla. was working the fair circuit when Rodriguez connected with them. The family has been featured at many events around the world, including performances in Japan, Bermuda, Canada, Germany, Jamaica and the Bahamas. Walter Murcia, the patriarch of the family, originally from Colombia, performs with his wife Victoria, two sons Alexander and Antony, and nephew Andres. The Murcia sons proudly represent the 10th generation of family circus performers. Rodriguez is thrilled to have them at the Florida Renaissance Festival.

“And over there is the world’s largest rocking horse,” said Rodriguez, pointing to a two-story-high wooden horse.“We have archery over here on the left, and over here I’ve got an encampment made up of high school kids. The gentleman who started it has been with me for 25 years. He’s an apothecary and he’s a fascinating man. He’s got this big long, white beard. Besides being an incredible historian, he is an expert on herbs and spices. There’s not a year that’s gone by that I won’t sit in front of his booth and listen to him explain stuff to people. He’s an incredible storyteller.”

As we approached a haunted graveyard under construction, one of the crew members came over to the golf cart to greet us. He laughed as he told Rodriguez how some rats ate through the skeleton’s arm when it got left out overnight.

“We go for realism here,” the worker joked.

Then we approached some tents, decorated with rich tapestries, plush pillows and a golden tea set. Rodriguez told us the area is a new encampment modeled after the Ottoman Empire.

“I don’t know if you’re familiar with the Ottoman empire, but the Ottomans basically invaded Spain in the 700s and ruled for 700 years,” Rodriguez said. 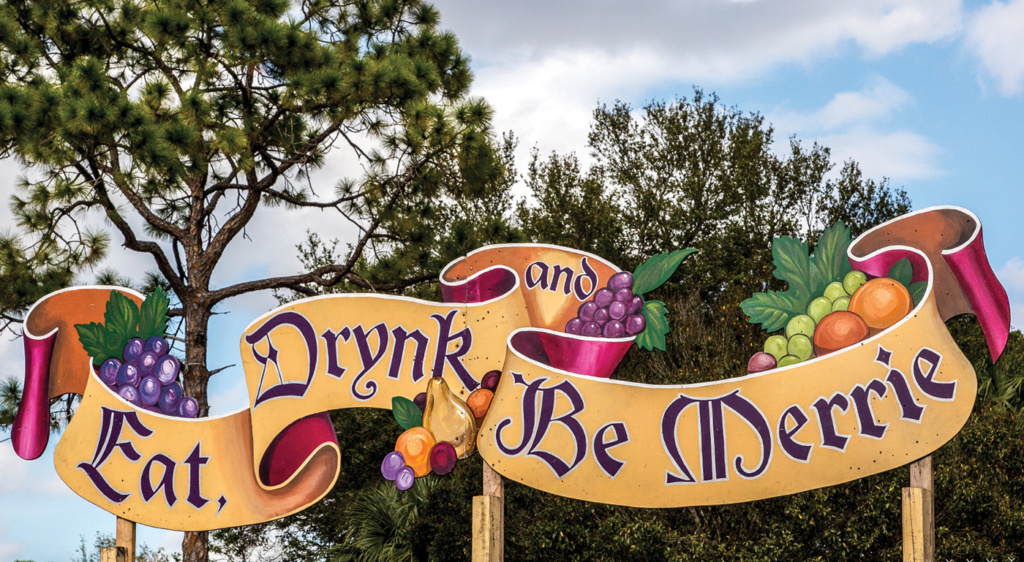 March 4 and 5
Wenches Weekend celebrates the women of the Renaissance with hourglass curves and fiery attitudes who can go toe-to-toe with their male counterparts.

March 11 and 12
Eat and drink your way through the Renaissance during Taste of FLARF Weekend. It’s a feast fit for a king as you indulge in foods reminiscent of the era, such as hearty turkey legs, Scotch eggs, shepherd’s pie and an assortment of delectable desserts. Wash it all down with traditional mead and aromatic wines that you can freshly stomp yourself from the finest grapes.

March 18 and 19
Sing and dance along to Irish, Scottish and English tunes throughout the shire during Celtic Weekend. Don your finest kilt while bagpipes blare. This weekend is a must for anyone who wants to embrace and celebrate their Celtic heritage.

March 25 and 26
Warriors clad in leather and fur will wave their battle-axes in fury, with only the strongest and most courageous making it through the festival’s final weekend.

While the Renaissance is traditionally recognized as a European phenomenon, Rodriguez said he’s tried to incorporate other cultures into the festival too.

“There was a lot of stuff going on in the rest of the world at that time, so I like to bring in a little bit of everything,” he said. “I’m all about diversity. I’m probably the first Ren fair in the country to bring in dancers and percussionists from the Ivory Coast of Africa. I did that about twelve years ago and they were in my show for about three years in a row. Then I brought in Taiko drummers from Japan in ancient garb. This year, it’s the Ottoman.”

“I never want someone to say, ‘Oh, I went last year,’” he said. “Even for our regulars, it will hopefully be exciting, because it’s never the same old, same old.”

If one thing was clear from Rodriguez’s tour, it’s that he is passionate about creating a unique, immersive experience for his guests. 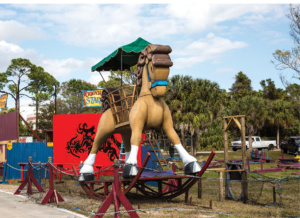 Jenna Rose Fazzino (a.k.a. Scarlett Rose), a semi-professional costume-play enthusiast who has been attending the festival for years, said Rodriguez does a particularly great job at creating a “magic atmosphere” for both the actors and attendees.

Michael Luhrs — a Coral Springs local who married his wife at the festival, constructed one of the Ottoman tents this year, and will be performing in this year’s production of “The Tempest” — agreed.

“One of the things that Bobby has prided himself on over a lot of the other festivals is the street cast — really training and building up the people that are in the streets,” Luhrs said. “Every show has great stage shows. There’s a million vendors. But every festival does not have an interactive cast. We’re genuinely friends with each other and people can see that on the streets. It helps build the suspension of disbelief — the willing suspension of disbelief.”

Rodriguez said people who attend the festival feel the sense of community and get immersed,

“We have a base of people that attend the show every weekend, if not every day, of the festival, and we are getting more and more people that are getting dressed up in costume. As a matter of fact, I’d say in the last six or seven years, it’s gotten to the point where it’s hard to tell who the cast members are and who the patrons are.” 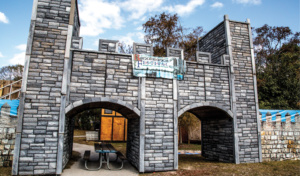 In addition to the new acts, in honor of the 25th anniversary, Rodriguez is bringing back some old favorites, including a historian and actress from the Maryland Renaissance Festival who will dress as Queen Elizabeth I, and a gentleman who was in the Florida festival about 20 years ago and played François d’Angoulême, the king of France.

The 25th season of the Florida Renaissance Festival will take place every weekend from Feb. 11 to March 26 at Deerfield Beach’s Quiet Waters Park (401 S. Powerline Rd., Deerfield Beach) from 10 a.m. until sunset. Ticket prices are $21 for adults and $9 for children ages 6 to 11. Discount tickets are also available at Walgreens for $17 for adults and $8 for children. Children 5 and younger are free. Special seasonal passes are available for $75, and group ticket rates are also offered.  For tickets and more information, visit ren-fest.com; on Facebook: Florida Renaissance Festival; or call 954-776-1642.

All the World’s a Stage 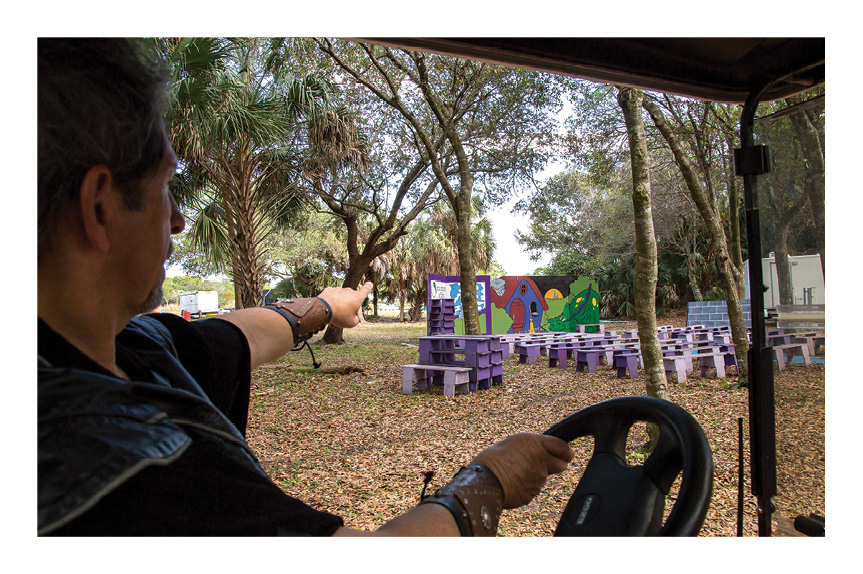 When Bobby Rodriguez, the Florida Renaissance Festival’s founder and organizer, first thought up the festival in 1990, he proposed it as a substitute for a black-tie ball for the Broward Center for the Performing Arts, which was opening soon. When the center ultimately backed out, Rodriguez took a leap of faith and decided to independently produce the festival himself. He trained the actors, produced the shows and organized the festival.

In its first year in 1992, approximately 3,000 guests attended the one-weekend festival, allowing Rodriguez to barely break even. Now, the festival has grown so popular it has expanded to seven weekends, has more than a half-million-dollar budget and attracts roughly 100,000 people. While the festival moved locations a few times in the early years, the festival has now been celebrated in Deerfield Beach for 18 years. 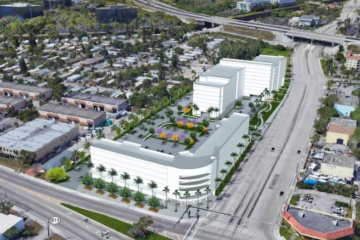