PLAYING BY THE RULES

In recent months, a local publishing company “borrowed” Lighthouse Point Magazine’s personal business mailing list for their own use, apparently with the wild and stupid idea they could capture some of my clients. Although I have copies of that particular publication with the mailing company’s postal code to prove that the mailing list was taken without my knowledge, both companies deny complicity. This outrageous behavior is obviously an act of desperation and in the end shall prove greatly damaging to both companies involved. Keep tuned.

11 year-old Jamie Parmanter, a 5th grade student at St. Coleman’s Elementary School, received a check for $50, honoring her as SuperKid of the Month, at a Lighthouse Point Chamber of Commerce meeting at BankUnited in April. If you may be aware of any school child that has served the local community in a kind, generous and outstanding way, please send your nomination to us by email at LHPnews@bellsouth.net with all the necessary details.

CONGRESS MORON OF THE MONTH!

Republic Report uncovered that in March, Congressman Tim Holden introduced a bill to allow industrial farmers to dump animal waste into the Chesapeake Bay. He then immediately received $16,000 in reelection campaign contributions from the National Turkey Federation, the National Chicken Council, Dean Foods, and other industrial farming polluters. This disgusting and unpatriotic act is just a small example of what crimes are being perpetrated in Congress.

WHAT’S WRONG WITH THIS PICTURE?

Those who claim “There ain’t no justice in this world” are usually correct. I was given a ticket about a year ago when I backed into a white van that was moving illegally behind my car as I attempted to back out of a parking space in front of a dance studio at the Gateway Shopping Centre. The driver was in the process of letting her kids out for dancing lessons, and rather then finding a parking space, pulled directly up behind parked cars. Consequently, I was blamed for the mistake of a totally mindless driver that jeopardized the lives of her children through this obvious act of laziness. Now it seems resident Roxanne Rowen just had the same thing happen to her as she was pulling her car out. She is being blamed, as I was, and will have to pay for someone else’s clear case of senseless driving.

The Most Expensive House in Pompano Beach: Pictures and Price Info 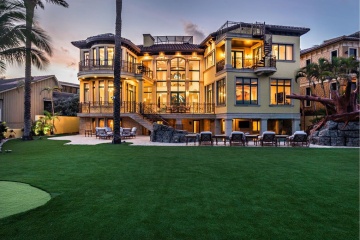