Local pride, rich history and a tradition of vibrant storytelling make the oldest city in the United States a must-visit destination

St. Augustine: the oldest city in the United States. Traveling through this marvelously historic city is a journey through time and history — going back to the earliest beginnings of the discovery of America and the very first footsteps of Europeans on the continent. While Christopher Columbus is widely accredited for discovering America, it is believed in fact, to be Ponce de Leon, who was the first to officially discover Florida in 1493 and claim it for Spain. St. Augustine itself was founded in 1565 by the Spanish conquistador Pedro Menéndez de Avilés, making it the oldest continuously occupied settlement of European origin in the contiguous United States.

As one takes their first footsteps into downtown St. Augustine, the European heritage, history and influence can be seen and felt everywhere. The old brick roads, narrow alleyways and passages, quaint houses, churches, chapels and other historic landmarks greet you upon first sight. The city is a time-capsule of the nation’s oldest colonial influences, and the city has preserved that capsule well. Much of the city’s earliest architecture and infrastructure have remained intact, and impressively so, in a cohesive manner.

St. Augustine works hard to maintain its history and cultural heritage. The city achieves this by having in place strict regulations when it comes to exerting any changes to existing buildings, landmarks or other objects of historic value. In tandem with the historic architectural review board (HARB), the goal is to ensure preservation of historic property in the city as well as maintain the visual facade of property to reflect that history. This also applies to hotels, inns, restaurants, shops and businesses that occupy space in the city. This ongoing mission of the municipality has earned it its praise for maintaining Florida’s old-town charm and rich cultural heritage.

You will be hard pressed to find any major corporations tainting the city. Chain organizations are a relatively rare sight here. Rather, you will mostly find individual shopkeepers, restauranteurs, innkeepers, family businesses – St. Augustine is a town where the proverbial mom and pop store, the individual business owners still thrive. Their success is a silent, yet solid statement to the big corporations. It’s a boon to the small business owner and delivers a surf of fresh air from the world’s accustomed globalized corporations. Not the big chain hotels flourish here, but rather the more intimate inn or the bed and breakfast is the lodging of choice for many travelers here.

A visit to the oldest city of America merits a visit to the city’s oldest inn. Built in 1791, the St. Francis Inn has been a lodging accommodation since 1845. Located on the picturesque St. George street, the Inn seeks to deliver an experience of old city charm elevated by modern comforts that meet the expectations of today’s discerning traveler. Owned and operated by Joe and Margaret Finnegan, who took the Inn over in 1985, it abides by the same regulations as private domiciles for presevering its history, something that the Finnegans: “Hold very, very dearly.”

The St. Francis Inn is listed in several of the nation’s most discerning registries of high-end inns and bed and breakfasts. It is also the only lodging to be listed by National Geographic Travel as “the place to stay” in St. Augustine.

While my stay at the Inn was unquestionably reflective of the accolades it has earned, it was the little things, the gestures and extras, which remained with me most profoundly. A warm greeting at the door, a piece of homemade dessert after a long day trekking through town or the perfect restaurant recommendation. It was this engaging, personalized care from the Finnegans that made the experience outstanding. And while welcoming guests may be one of the simplest aspects of great hospitality, true human warmth is not something that can be faked.

This friendly human touch recurs consistently in St. Augustine. The majority of inns, restaurants and shops are owned and operated by proud locals. The famed St. George’s pedestrian area is dotted with small restaurants, coffee bars, little shops and art galleries. Similarly to the inns, many of the restaurants are situated in historic buildings that have been around for hundreds of years — a true throwback to days gone past.

Exploration is exciting. Diversity of establishments, refreshing. Hours can be spent easily on just one small street. And there are very few intrusions to this identity of local entrepreneurship. Whatever establishment it is you choose to enter, chances are high you will be greeted by the owners, happy to strike up a conversation and tell you stories about St. Augustine. And it is exactly that which shines through the most while adventuring in St. Augustine — the local people and their pride for the city. The bar is set high. And it shows.

From St. George Street, the “Plaza de La Constitution,” St. Augustine’s main square, is but a stone’s throw away. The square is home to multiple monuments and statues that pay homage to the square’s rich and diverse history. Its strategic location ensures that any direction you choose to wander will lead you to an area worth exploration.

Directly east, the bridge of Lions looms — offering beautiful views of the bay and Matanzas River. Along the waterway, there is a restaurant and local staple, O.C Whites. Located in one of the oldest buildings in the city, it is a local hotspot for seafood and craft beer. Further exploration along the seawall will eventually bring you upon another famed dining establishment, the Raintree, which is an impressively restored colonial Victorian estate dating back to 1879. The Raintree is another delightfully historic building to experience the feel of the city in, while enjoying fine dining, both in- and outdoors.

Look West and you will see towering what used to be the legendary Ponce de Leon hotel. An architectural wonder of its time, it was legendary Henry Flagler’s first hotel and today is the home of Flagler College. Directly across the street is the equally revolutionary Alcazar hotel, also built by Henry Flagler. Today, the Alcazar is home to the Lighter museum, which houses an impressive collection of 19th century antiques and art, as well as Café Alcazar, a restaurant located inside the old indoor-pool of the former historic hotel.

Head South and you can venture the city’s oldest street, Aviles street. With some of the oldest remaining colonial houses, it takes you even further back in time. Here too, restaurants, art galleries and cafés line the narrow brick road and time-gone facade. Stay the course and you will find yourself in the historic district. For the most part residential, it is street after street of colonial Spanish and Victorian properties.


North of the plaza, you will find the Castillo de San Marcos, a fort built by the Spanish to repel invaders — particularly British aggressors during the Anglo-Spanish war. The base of the fort’s walls are built from crushed seashells called “coquina,” which had the remarkable ability to withstand and absorb canon shots. Attacks on the fort were quite futile and the impressive structure still stands today.

Just across the street from the fort, the colonial quarter can be found. An outdoor museum depicts how the earliest colonials lived their lives here. With canon and musket fire demonstrations, authentic blacksmithing and old colonial houses as they were in the 1500’s, the quarter paints a detailed picture of how life was in the earliest days of Spanish Florida.

Volunteering in the quarter as a tour guide is historian and Stanford PhD graduate Chad Light. It is not every day you get a museum tour from a forensic anthropologist about human colonial history. Mr. Light is another testament to the pride and commitment of the people in this unique city.

While St. Augustine is gorgeous to explore on foot, a hop-on, hop-off trolley service operates here seven days a week. Old Town Trolley provides the means to see the entire city, and its more hidden parts, comfortably. The trolley operators function as both drivers, and knowledgeable tour guides.

Despite the incredible number of things to experience at the core of the city, St. Augustine stretches out far beyond its downtown and historic areas. The Matanzas river and bay give visitors the opportunity to see St. Augustine from the water. The river and the bay are teeming with wildlife. Many indigenous bird species and rare forms of crustaceans are found here. The specific type of seashells used for the coquina to build the Castillo de San Marcos can only be found a few places around the world, but are abundant here. Numerous pods of dolphin patrol the river. There is a lot of marine wildlife research that takes place here due to the area’s unique ecosystem.

Eco tours of St. Augustine is an organization that provides non-intrusive educational tours of the river and bay of St. Augustine. Their goal is to provide wildlife tours of the surrounding coast while ensuring conservation and protection of the natural habitat. Going out on a boat with Captain Zach McKenna, who has an academic background in marine studies, is a treat. Through an easy-to-follow narrative, McKenna gives a comprehensive insight of the local wildlife, discusses the marine research he is involved with and recounts historical moments on the waters surrounding St. Augustine. The boat ride is thrilling and fast at times, yet smooth. And Captain Zach ensures it all happens with wind in your hair and a smile on your face.

On the other side of the Matanzas River lies the final frontier of land to the east before the Atlantic Ocean — Anastasia Island. Home to Anastasia State Park, the lighthouse, maritime museum and famous zoological alligator park, there is much that warrants a visit to the island. Particularly the zoological farm where visitors can experience exotic wildlife, not just from Florida, but from all over the world including Komodo dragons, giant tortoises, hundreds of alligators and crocodiles, exotic birds, venomous snakes and amphibians. Even the prehistoric skull fossil of the Sarchosuchus, one of the largest crocodilian species to have ever lived, weighing up to 20,000 pounds, can be seen here. Guests can also watch live as a zookeeper feeds hundreds of eager alligators in the swamp.

On the island too, you can experience some fantastic dining opportunities. “Amici’s,” ran for 35 years by Sicilian siblings, Vito and Benedetta, is a true authentic representation of rustic Italian and Sicilian cuisine. The grilled swordfish and Pasta Alla Norma are stand-out dishes.

End of the Line

Continue the journey east and St. Augustine beach will be your destination. An open and vast beach stretches the island’s coast. The beautifully white and soft sand entices — a perfect chance for some much-earned relaxation. This is the end of the line. In front of you only the ocean and horizon loom. Behind you St. Augustine and everything you have seen. It makes for a very fitting final setting for the conclusion of your journey, and a chance to contemplate and reflect on your trip.

Untouched and unspoiled by the bustling outside world, St. Augustine remains true to itself. The experience feels authentic, and the sensations of discovery and exploration, real. Its history will leave you feeling enriched. The welcoming care and openness of the St. Augustinians ensure you are tapped more deeply into your journey. And as you overlook the ocean on Anastasia Island’s beach, the trip will leave you wondering, why aren’t more places just right like this? 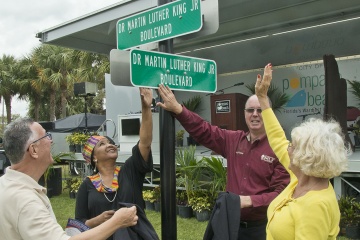