The outside facade of Casareccio is deeply misleading — the Italian restaurant is tucked snugly in between a Chilean-American sub shop, a neon-sign psychic and a Polish Deli in a congested little, dime-store strip mall off Federal Blvd. and SE 14th St. Take one step inside, however, and it is plain to see that Casareccio is a diamond in the rough — an insider’s secret.

Instantaneously one is taken by the warm, rustic and inviting atmosphere. Some old-fashioned pasta strainers hang from a wall made entirely of re-claimed wood. The wall opposite is made entirely of chalkboard displaying the day’s menu in friendly, colored chalk. A shelf of homemade Caponata in mason jars sits in front of the cozy, three-seat bar while strings of warm, round bulbs hang like Christmas lights from a wood-paneled ceiling. Exposed brick and corrugated steel details add to Casareccio’s homey feel. The name Casareccio — which means homestyle cooking — evokes this sentiment as well; as do the tee-shirts, which feature the slogan: “Don’t tell Nonna I’m at Casareccio.”

The dining room holds a mere seven tables, most of them family-style, long and wooden. Guests are greeted personally by Emilia, Casareccio’s co-owner, baker, desert chef and one-woman front-of-house. Her kindhearted boyfriend, co-owner and Executive Chef Salvatore is spotted in the restaurant’s small kitchen behind the bar. Upon greeting our group, Emilia was quick to expound on the restaurant’s guiding values — organic ingredients bought personally, by hand, in small quantities from local markets. A few ingredients, such as pistachios, some styles of pasta and sheep’s milk ricotta (for Emilia’s homemade cannoli) are imported from Italy. The vast majority of items — gnochi, fresh-baked bread, sauces, tiramisu — are made lovingly by hand. While buying in small quantities sometimes means Casareccio runs out of certain dishes on busy nights, it ensures every dish sent from the kitchen is made from the freshest, most-quality, hand-picked ingredients. Emilia said too, guests can reserve their favorite dishes in advance if they mention their desires before visiting.

Our group’s meal began with Emilia’s fresh-baked bread served with homemade caponata. This was followed by Salvatore’s stuffed artichoke, made with breadcrumb’s from Emilia’s bread, fresh herbs, pine nuts and cheese. It was roasted to perfection while the stuffing remained moist and flavorful. Homemade Panelle (a Sicilian chickpea fritter) hit the table next; followed by a fresh burrata with heirloom tomatoes, basil, balsamic reduction and a Milanese-style chicken. For our group, Chef Salvatore prepared two more family style dishes on large platters — the Pappardelle Porcine e Saliccia (papadelle pasta cooked with a crumbled Italian sausage and porcini mushrooms in a tartufata cream sauce with truffle oil), and a fettuccine with giant prawns, roasted zucchini and cherry tomatoes in garlic and olive oil. Chef Salvatore clearly prepares his food with soul and a deep respect for the ingredients. At one point during our meal, Chef Salvatore even brought over a plate a freshly-caught Branzino to show off the quality of the day’s catch. We ended the meal with Emilia’s homemade cannoli and some Italian espresso.

In the days following, I found myself reminiscing longingly about my experience at Casareccio as if homesick for the restaurant. Casareccio leaves a lasting impression and makes one grateful for being lucky enough to have stumbled upon such a hidden gem.

Here’s What Your Neighbors had to say about POMPANO BEACH: HEADING IN THE RIGHT DIRECTION? 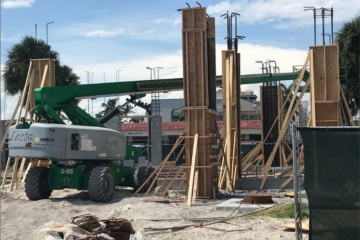